Every birder has favourite sights and sounds that carry personal significance each season; perhaps the whistling of Wigeon in winter, Cuckoos calling in spring or summer parties of screaming Swifts. For me, the sibilant ‘tseeep’ of unseen Redwings passing overhead on chilly nights in early October is one of the most evocative indications of the arrival of autumn.

Both Redwings and Fieldfares have already started reaching us this year, with BirdGuides records totalling thirteen and five respectively at the time of writing, but the main arrival is still to come. This article considers what we expect to happen over the next few weeks and looks at how you can use BirdTrack and BirdGuides to monitor and display the pattern of further arrivals of these two charismatic indicators of autumn.

Ringing studies of Scandinavian Fieldfares show that fewer than 1% of the population move more than 30 miles from their nest sites by the end of September, so it’s not surprising that BirdGuides’ September records for each of the past three years are in single figures (see Tables 1a–c). The main migratory departure is in October and, like many other species, the adults tend to leave first. 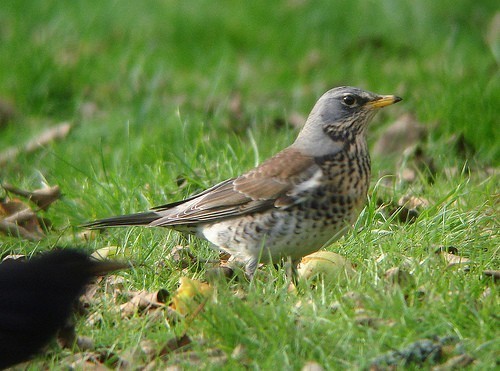 Fieldfare numbers can be expected to build up throughout October. BirdTrack weekly reporting rates (Fig. 1) show that we can anticipate Fieldfares featuring on 7% to 15% of all complete BirdTrack lists by the middle of the month, with the peak reporting rate for the entire year (approximately 20% of all complete lists) for both 2007 and 2008 being the last week of October. 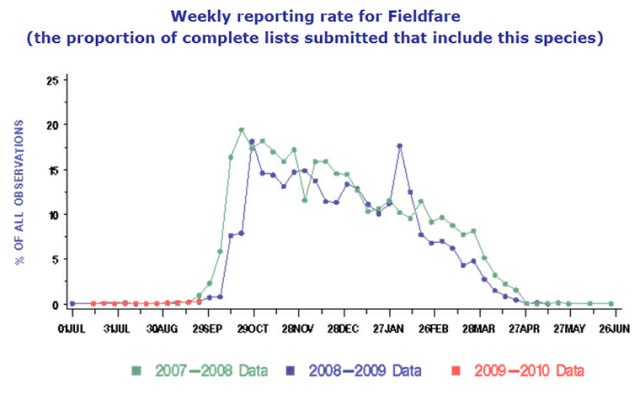 Two distinct races of Redwing pass through or winter in this country. Fennoscandian breeders of the nominate race Turdus iliacus iliacus winter over most of western Europe, including Britain and Ireland. A smaller population of the race T. i. coburni breeds in Iceland and the Faroe Islands. The bulk of the population of this race winter in Ireland and northwest Iberia but there are also many late-autumn ringing recoveries from Scotland and western France. This race is rare in England; there have only been two English ringing recoveries, the first in Cornwall as recently as January 2005. The coburni race is a fraction larger and darker, its main distinguishing fieldmarks said to be heavier streaking on the throat, more extensive olive-brown coloration across the flanks and under-tail coverts, more merging of the brown streaks on the chest-sides and a stronger buff tinge to the sides of the head. 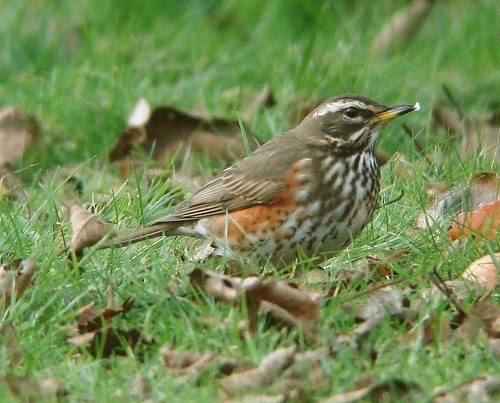 The earliest BirdGuides records of Redwing over the last 3 years are a fraction earlier than those of Fieldfare, with an average first date of 8th September compared to 12th for Fieldfare (see Tables 2 a-c). Both BirdGuides records and the BirdTrack weekly reporting rate (Fig. 2) show an interesting arrival pattern in 2007, when there was an influx of Redwings in the last week of September involving a large number of birds. This is nicely illustrated by the diverging green and blue lines in Fig. 2 and the numerous individuals recorded on BirdGuides from 27th–28th September, including a sizeable visible migration count from West Yorkshire of 3825 birds (Table 2c). Figure 2 also illustrates that the bulk of Redwing arrivals can be expected mid-month, following a very similar pattern to Fieldfare. Perhaps the most spectacular migration event of recent times involved Redwings; an enormous movement of several hundred thousand thrushes, mainly of this species, was witnessed across northwest England on 9th–10th October 2004. 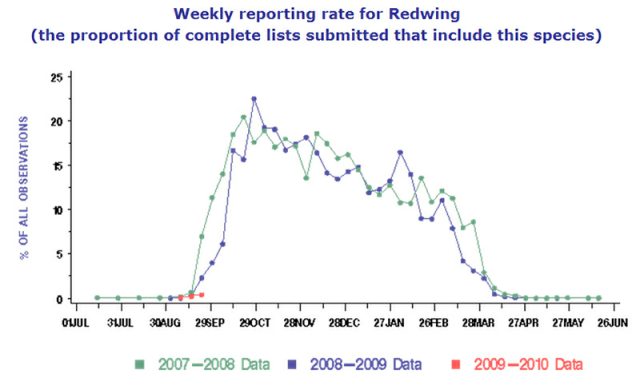 Pressures on the populations

Large areas of both species’ breeding ranges have a very low human population density so human activity is unlikely to have much direct effect on their breeding success. However, hunting does continue to put pressure on both species and it accounts for the majority of ringing recoveries of Redwing in southern Europe.

Like many other species, though, the main concern is climate change; Fieldfares have already begun expanding their breeding range in a southwesterly direction but the consequences of further alteration have yet to be revealed. Recording the arrival times of these migrants is just one way we can start to detect and understand how bird movements are being influenced by climate change.

BirdTrack provides free online recording software for birders, and for those already familiar with it, it has been evolving! The homepage recently had a face-lift to make it much more user-friendly. Changes include fewer menus across the top and neat boxes for the key options, making it easier to register/login, to select one of the stunning BirdTrack wallpapers or to check the brand new BirdTrack flickr pool. Start recording this autumn’s arrivals by registering now! 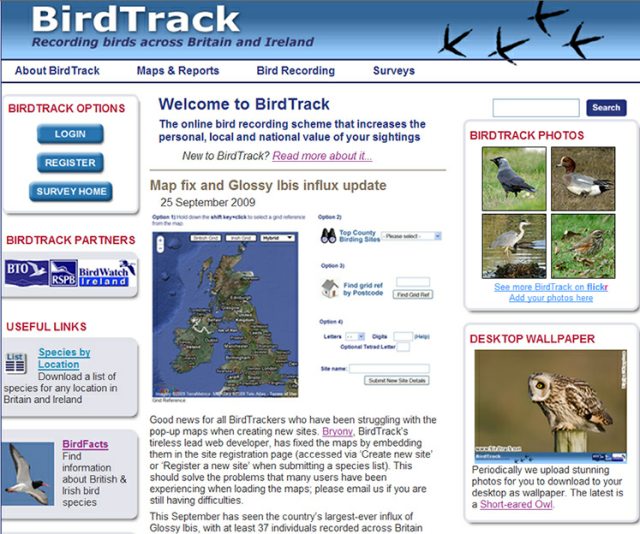 Maps & Reports is a useful tool for displaying data from any area of Britain and Ireland over the past seven years; the animated maps for Fieldfare and Redwing are set to make really interesting viewing throughout October as northern thrushes arrive en masse.

Table 1a) Fieldfare on BirdGuides September 2009

Table 1b) Fieldfare on BirdGuides September 2008

Table 2a) Redwing on BirdGuides September 2009

Table 2b) Redwing on BirdGuides September 2008