After an excellent meal in the evening on day 1 at The Mantra in Darwin, including several medicinal beers and rather too much of Australia Northern Territory's finest red wine, I manage a night of fitful sleep, during which my body clock persists in telling me to get up and about every two hours from 2am. Nevertheless, at 7am we make our way by air-conditioned coach to Mary River, stopping on the way at a variety of wonderful habits with a whole host of Northern Territory (NT) speciality species.

Our first stop is a site just 30 minutes outside of Darwin, at a large area of scrub and Eucalyptus that looks innocuous enough — actually very like the epitome of suburban Australia — but delivers some great birds. The first is Great Bowerbird, a large, grey, corvid-like bird that is surprisingly cryptic when perched in the canopy. The amazing thing about this species, apart from its beautiful crimson nape and subtle grey plumage, is its habit of building its own twig-constructed bachelor pad (its bower) around which it places various stolen goods aimed at impressing the female with enough bling to secure a bit of uncomplicated 'Bower-loving'. Our Bowerbird seems to like green, as he has collected and lovingly placed fragments of green broken bottles, green plastic wrappers and other green objects in front of its very own nicely appointed split-level flat. The idea is that if a passing female likes the 'rocks that it's got' she will put out, and then once finished go off and lay eggs and raise young. I have many friends with much less sophistication and thought who do very well through this strategy. Our Bowerbird deserves to do well.

While watching the bowerbird and taking notes from him on how to pull, we secure lots of new additions to the trip including Brown Falcon, which passes over our heads on floppy, harrier-like wings and then dive-bombs a group of unsuspecting Magpie Larks. As well as the falcon, we add Yellow-throated Miner, the smart Black-faced Cuckoo-shrike, Dollarbird, and Little Corella. Then we head on to Palmerstone Sewage Works for some more eastern shorebird action. Arriving at the sewage works, which consist of a series of settling lakes with muddy, scrubby margins, we quickly lock on to a large flock of terns relaxing on one of the dividing causeways; a quick scan reveals Whiskered, Gull-billed and White-winged Black. Then we discover a muddy pool a few metres from the van that has a nice smattering of waders including Red-necked Stint, Common Sandpiper, Pacific Golden Plover and, to everyone's great delight, at least ten Sharp-tailed Sandpipers; soon Black-banded Plover joins the throng.

Next stop is the mangrove forest bordering the sewage works. We are looking for some rare NT mangrove specialities including Shiny Flycatcher and Mangrove Robin. After what seems like an age, punctuated pleasingly with great views of Lemon-bellied Flycatcher, Red-Headed, Brown and White-gaped Honeyeaters, we finally catch a glimpse of the enigmatic Mangrove Robin. Staying low and preferring the dense vegetation of the mangrove, the bird proves difficult to pin down. After 30 minutes of frequent frustration and misidentification (mostly by your writer) we all manage more than passable views of this mangrove forest speciality. 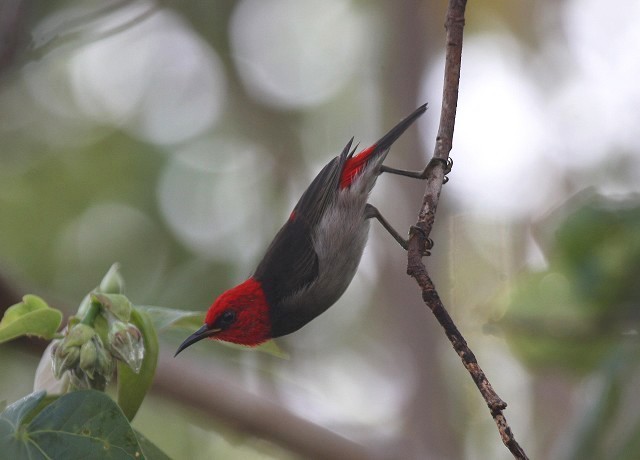 Then it is back on the bus for a quick stop at Howard Springs for one more fix of the beautiful Rainbow Pitta that we saw yesterday, and then lunch at Fogg Dam where we secure great views of White-browed and Buff-banded Crakes along with another stunning spectacle of waterbird volume and biodiversity.

We finally arrive at the pontoon at Mary River to be greeted, as we board a flat-bottomed skiff, by Lee, our friendly guide-cum-captain who immediately goes through the safety briefing on the boat. Most of his briefing revolves around the fact it is apparently a very bad idea to hang any part of your anatomy over the side of the boat at any time because Mary River has the highest density of Saltwater Crocodiles (the infamous man-eating "salties") anywhere in the world, and these crocs have a penchant for leaping out of the water and grabbing whatever large, mammalian prey they can get their sizeable teeth into. The Mary River National Park is home to 22 Saltwater Crocodiles for every square kilometre of river, which is great news if you're a keen naturalist and wildlife watcher; not so good if you're a resident Wallaby who happens to be thirsty.

So we set off down the Mary River watching White-bellied Sea Eagles, flocks of Green Pygmy Geese, five species of heron, Australian Darter, kites and flycatchers. We quickly discover a little party of Agile Wallaby, sensibly staying back from the water's edge and out of croc striking distance. Unsurprisingly, we also spot several large Saltwater Crocodiles but they are mostly in the water, so views were limited to the evil set of eyes and the log-like, gnarled head and upper body.

Suddenly someone spots a 3.5-metre salty lazing on the shoreline. We creep stealthily closer and closer, fully expecting this one to be as cautious as his crocodilian colleagues, but our croc doesn't move. Finally we are on top of this magnificent animal, the prow of the boat grounded at the bank of the river and less than a foot away from its snout. Feeling somewhat uncomfortable, I edge to the prow to get as close a photo as I can of the jagged row of blood-stained (yes, blood-stained!) teeth. Finally the croc gives up and pushes itself off into the river with a single fluid movement, as if to say "you win this round, but wait until your swim this evening; I'll have you."

We then turn and make our way back to the pontoon with the sun setting slowly to the starboard and with flocks of Magpie Geese, parties of whistling duck, Nankeen Night Heron, Little Pied Cormorant, Eastern Swamphen, flocks of kites and single White-bellied Sea Eagles preparing for dusk on the Mary River. Back at Wildman Camp, our venue for this evening, we kick back over a very nice dinner and some good wine, preparing for tomorrow and another amazing day in the Australian Outback.