August is a good time to see migrant Wood Sandpipers on muddy marsh and pool margins, having completed their brief breeding season up on the northern Eurasian taiga and tundra. It is also the time when juvenile Common Redshanks are making their post-fledging feeding forays into the same habitats, and it is here where the much longed-for ‘Wood Sand’ year-tick can be thwarted by confusion between the two, especially at a distance or through the late summer heat haze.

Mid-brown overall in juveniles and greyer and more flecked in the adult, it is when Wood Sand takes to the air that its white rump – rather than a long white wedge up the back, like Common Redshank – and narrow tail-bars, along with its lack of a white hind wing, make it only really confusable with Green Sandpiper. Remember: if in doubt about a small Tringa wader, wait until it takes flight.

Juvenile Common Redshanks are streakier than adults, with a plain dark medium-length bill and yellow-orange legs, and can have a slighter build than fully grown examples, all of which leads to more confusion with Wood Sand than the plain greyish adult Common Redshanks. However, the neck streaking extends onto the belly and rear flanks in juveniles of the latter, and is never very diffuse, while its bill is more robust compared to the more slender beak of Wood Sand. Later in autumn, they develop a red base to the bill and they should adopt a more plump jizz as they fatten up.

Common Redshank’s teu and kip-kip calls should be familiar to most estuarine birders, but Wood Sand is less vocal, uttering a single chiff-if-if flight call and a similar alarm call. Lesser Yellowlegs is a higher-pitched teu, which is sometimes – but not always – uttered more frequently than Common Redshank’s. 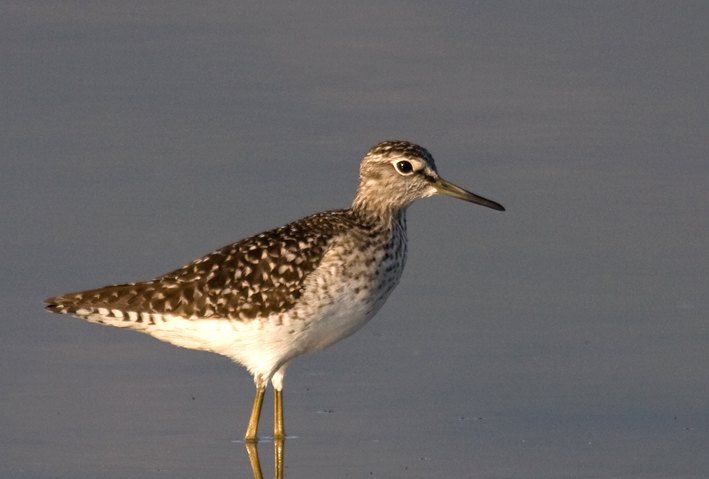 Adult Wood Sandpiper (Lesvos, Greece, 1 May 2008).
This is an altogether more delicate proposition than Common Redshank, with a prominent
supercilium in all plumages. Photo by Bas Haasnoot (www.agami.nl). 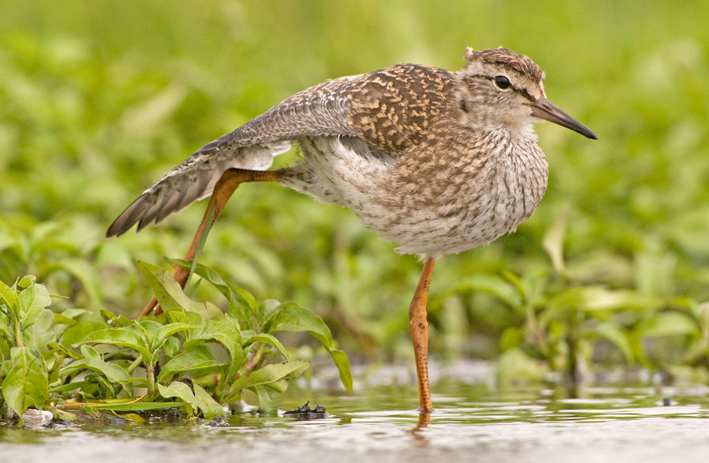 Juvenile Common Redshank (Edam, The Netherlands, May 2011).
Note the more extensive flank streaking, the stockier bill and the unusually pale orange
rather than dull yellow legs. Photo by Hans Germeraad (www.agami.nl).
Content continues after advertisements
Login to leave a comment
Return to List