A perennial confusion pair in late summer is Eurasian Curlew and Eurasian Whimbrel, particularly when shorter-billed birds of the former species are on their way to their wintering grounds. Both species will be on the move to varying extents, and some individuals will require closer scrutiny. While the large female curlews with their long, curved bills stand out fairly well, juveniles with not-quite-grown beaks and some males can easily be mixed up with the smaller Eurasian Whimbrel.

Eurasian Whimbrel has a shorter bill with a more down-curved tip, and usually has an obvious dark eye-stripe and pale supercilium. The head also has a notably pale median crown-stripe between the two broad black stripes that form a dark ‘skull cap’ in profile.

Both species have light brown necks and bodies streaked with dark feather centres. Eurasian Whimbrel is greyer looking with a whiter vent and rear belly, the overall effect of which is to make it more monochrome than the curlew, but these differences are subtle.

In flight, both have a long white wedge extending from the squared-off rump far up the back. However, in Eurasian Whimbrel the dark primaries and tail make more of a contrast.

Once identified as Eurasian Whimbrel, juveniles can be told by their fresh and neat appearance, while adults are worn by the breeding process and often noticeably duller. Juvenile Eurasian Curlew is more precisely streaked on the breast, upper flanks and belly, whereas adults showed a greater number of cross-barred, arrowhead-shaped feathers.

If the bird calls, little room for error should be left: whimbrel has a rippling whistle reminiscent of Little Grebe, while curlew has a simpler ker-lee, after which it is named, or a cue-cue-kyeww. The curlew’s alarm call is like a harsher version of the latter, but Eurasian Whimbrel’s is a more rapid veeveevyoo. 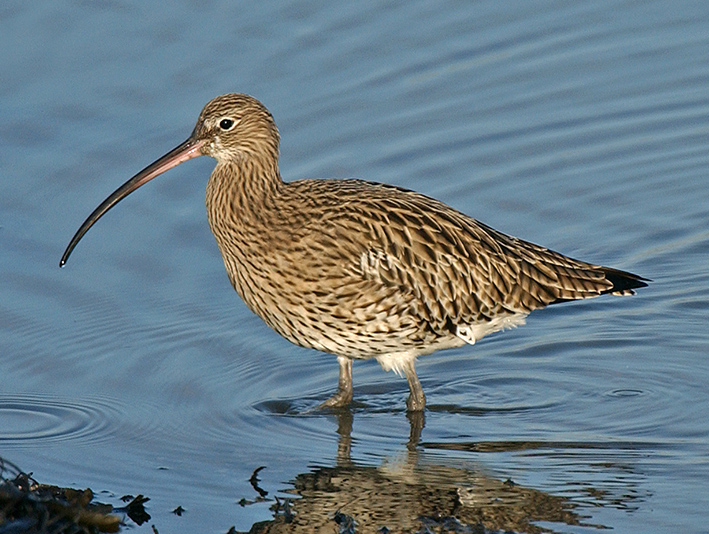 Eurasian Curlew (Caernarfon, Gwynedd, 18 December 2003). Everything is bigger on
Eurasian Curlew than Eurasian Whimbrel: note the longer, more gradually curved bill,
with a greater extension of pink on the lower mandible in particular.
Photo by Steve Young (www.birdsonfilm.com). 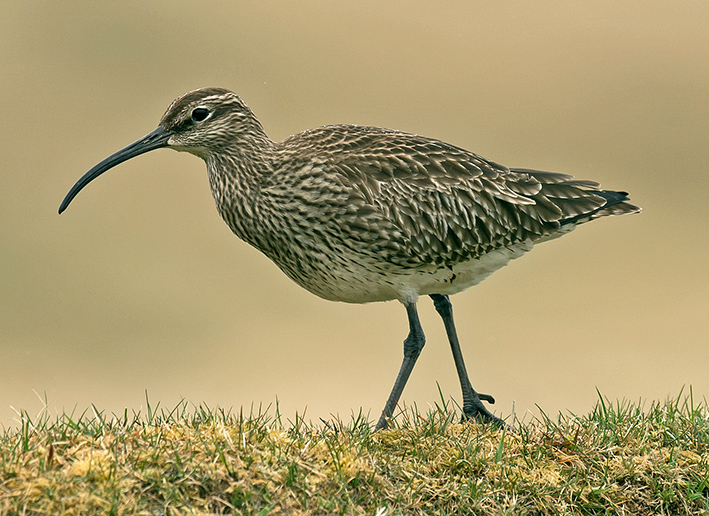 Eurasian Whimbrel (Shetland, 21 April 2013). A shorter bill with more of a kink at the
end is typical of this species, but note also the humbug-striped head pattern,
greyer overall plumage tone and slighter build.
Photo by Steve Young (www.birdsonfilm.com).
Content continues after advertisements
Login to leave a comment
Return to List