The planet is warming up, especially at the poles. How do organisms react to this rise in temperatures? An international team led by a CNRS researcher from the Centre for Functional and Evolutionary Ecology has shown that Little Auks, the most common seabirds in the Arctic, are adapting their fishing behaviour to warming surface waters in the Greenland Sea. So far, their reproductive and survival rates have not been affected. However, further warming could threaten the species. This research, supported in particular by the French Polar Institute (IPEV) and a US–Norwegian programme, is published in the journal Marine Ecology Progress Series.

Little Auks are among the smallest (150 g) and most common (40–80 million) seabirds in the North Atlantic. They inhabit the rocky coasts of Greenland and Svalbard. To feed themselves and their chicks, they specialise in foraging for small planktonic crustaceans called copepods, catching up to 65,000 individuals each day. The birds seek out cold current areas, avoiding more temperate waters. Indeed, the icy waters flowing south from the Arctic Ocean via the Fram Strait, between Greenland and Svalbard, are home to large Arctic copepods, Calanus hyperboreus, which are very rich in fat. Another species of copepod, C. finmarchicus, thrives in more temperate waters, but is smaller and supplies less energy. Because of their specialised diet and high food intake, Little Auks are a reliable indicator for testing the impact of climate change on this region. 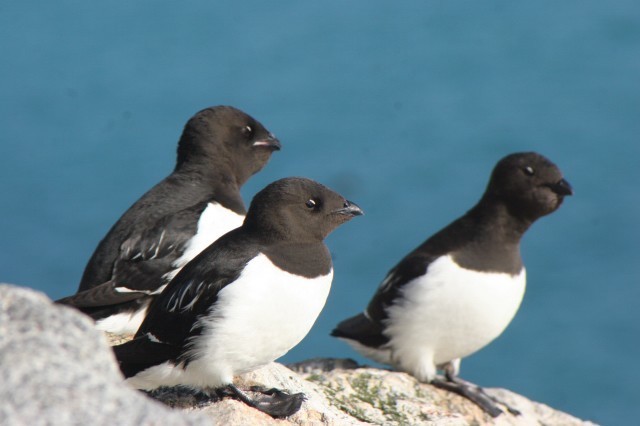 For three years, in summer, the researchers studied three colonies of Little Auks on either side of the Greenland Sea. The difference in surface water temperatures between the warmest and coldest site is 5°C. The warmest site, located in Svalbard, reproduces the conditions predicted for the late 21st century in the coldest site (East Greenland). Such temperature differences lead to major changes in the abundance and average size of zooplankton, reducing the quality of Little Auks' food resources (copepods).

Surprisingly, the birds have managed to make up for the warming of surface waters in the Greenland Sea by altering their diet and extending the duration of their foraging trips at sea. They travel further and for longer in order to feed in areas where foraging is more successful. So far, Little Auks have therefore managed to adapt to the effects of warming surface waters in the Greenland Sea. However, a 5°C temperature rise remains below the maximum temperature increase of 7°C predicted by climate models for the Arctic in 2100. Yet it seems that Little Auks have reached the limits of their physiological and behavioural capacities. More intense warming could therefore cause their decline as well as a major disruption of marine ecosystems in the Arctic. The scientists are now investigating the impact of global warming on the winter survival of these seabirds.