COMMON Redstart is an attractive but declining spring migrant that would liven up any day’s birding, while Black Redstart is a local scarcity that many a patchworker would love to find.

The brightly plumaged, red-tailed males are straightforward to tell apart: Common has extensive russet underparts contrasting with its black upperparts, along with a white forehead extending over the eye, while Black largely lives up to its name, apart from its buff undertail coverts and a conspicuous white wing panel. Both sexes of both species have a prominent orangey-red tail with a dark brown central stripe.

Black Redstart utters whistles and rattles reminiscent of Grey Wagtail, interspersed with a quieter sound redolent of jangling keys or grinding glass, while Common extols a high-pitched but soft series of fairly melodious whistles. Common’s call is a loud hweet like a Common Chiffchaff on steroids, as well as generic chat-like ticking sounds. Black lets out a sharp vist, with sharper, shorter ticking sounds, particularly when agitated.

Females are much more similar and subtle, and can cause occasional confusion even among those familiar with both species, due to light conditions and the atypical habitats of the migration period.

Generally, Black Redstart will frequent docks and industrial zones with little cover and prominent song perches on buildings, while Common is a broadleaved woodland species. However, spring and autumn can find both species in almost the same habitat, with Black Redstart temporarily inhabiting scrub and plantations, and Common haunting the bushes of urban parks.

Females (and immatures later in the year) are the same build and length, and display a much plainer version of the males’ plumages, without any of the obvious markings other than their red tails. Close examination of Common females will reveal a pale eyering set in a plain dirty brownish face, a colour which extends for the whole of the bird’s upperparts and wings. Its underparts will be a pale orangey-buff lightening to an off-white lower belly and undertail.

Female Black Redstarts are greyer affairs, with a much more uniform brown-grey body from head to wing-tip and belly, with a hint of white at the base of the legs and a very pale orange wash to the undertail coverts. There is no white wing-patch and no actual black.

Overall, the tone is the thing in females, but allow for the influence of dull or bright light. Black Redstart is sooty grey and dull overall, whereas Common is buff and can appear surprisingly bright. 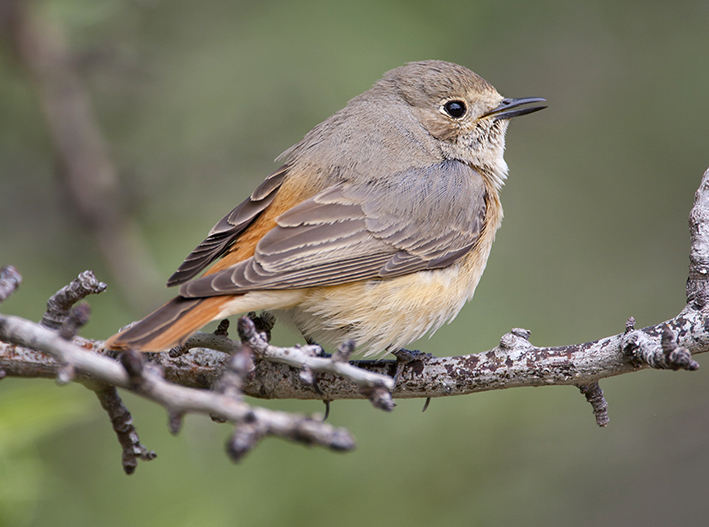 Female Black Redstart (Landguard NR, Suffolk, 21 March 2005). Befitting its use of
industrial sites in Britain, this species is a sooty grey-brown overall, with a duller range
rump and tail than Common. Photo by Robin Chittenden (www.robinchittenden.co.uk)
Content continues after advertisements
Login to leave a comment
Return to List