In mid-afternoon on 10th March 2010 I was just waiting to escape from work when an email popped into my Inbox titled "You have won the Best Holiday in the World competition". To my amazement I had won a two-week holiday around Cairns in northeast Queensland for two. It took an hour or two (and a day or two for my wife) before I believed it. After all, no-one wins things like that, do they?

However, in August of the previous year, I had read an article in the BirdGuides webzine on the plight of the Southern Cassowary, and the tree-planting plans of the Australian Rainforest Foundation (ARF). I'd made a donation of sorts, with zero expectations, but it seems that we sort of hit the jackpot. 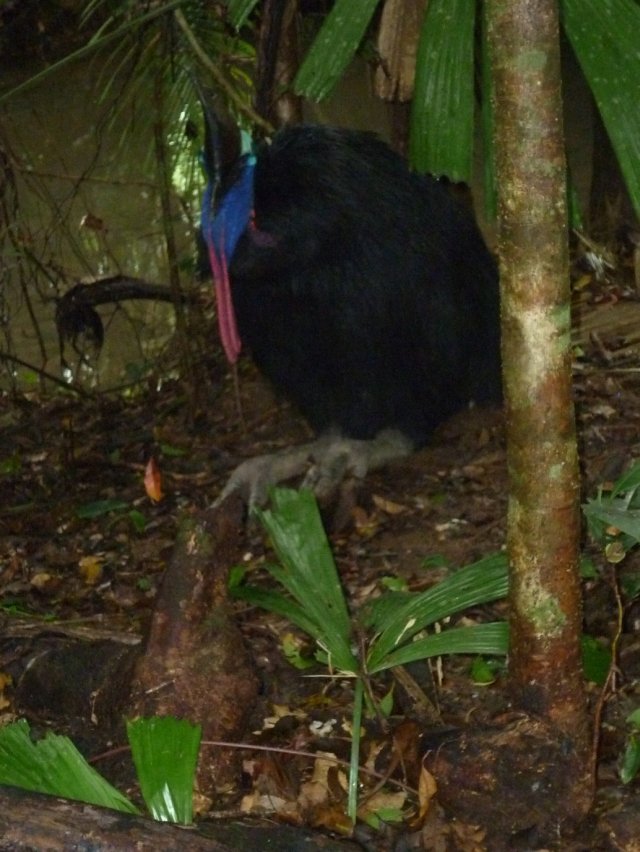 Unique to the rainforests of Australia and Papua New Guinea, only 1,500 Southern Cassowary survive in the wild (Photo: Jon Bartlett)

So, with the valuable help of the ARF, we planned our itinerary. I'm a moderately keen lister, whilst Maxine loves the countryside and wildlife, but is hardly a birder (yet). So we planned two weeks that included some potentially good birding, but also some tourist days and some pure relaxation. We planned to go in late September, to catch the end of the dry season, but also the spring Down Under. And we have just got back from an excellent holiday.

So here's our essential check list for I-Spy Australia: 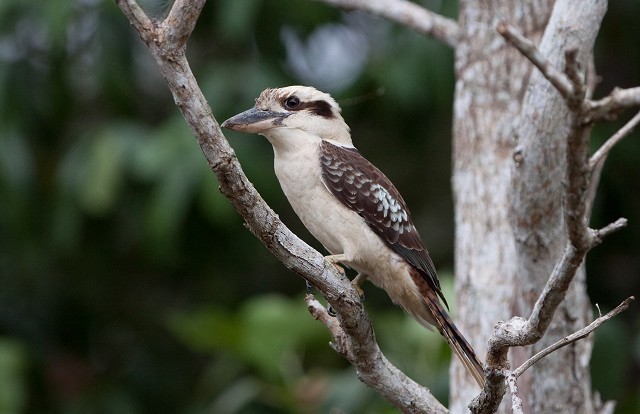 The birding was brilliant, and easy. I read an article by a red-hot birder who had visited the Cairns area and had been guided to all the endemics and rarities. He saw 235 species in five days. We managed 183 in 14 days with limited guidance — and it was still a holiday.

Perhaps the highlight was the Cassowary. You may have read the dreadful warnings of how dangerous a Cassowary can be — tales of human-height birds jumping at you with claw-clad feet. We were killing time between planting a tree for ARF and going treetop surfing (don't ask), and I suggested a stroll round a forest boardwalk near Cape Tribulation. Halfway round we came across three people signalling to us and, wonders of wonders, there was a male Cassowary and a well-grown chick. And this is where the story changes from the sublime to the ridiculous. Twenty minutes later, both cassowaries had sat down a few feet from the path and were allowing a group of eight people to take photographs. If you don't believe me, see below. I'm afraid the excitement of having found a Cassowary was tempered by the feeling that it had given itself up. 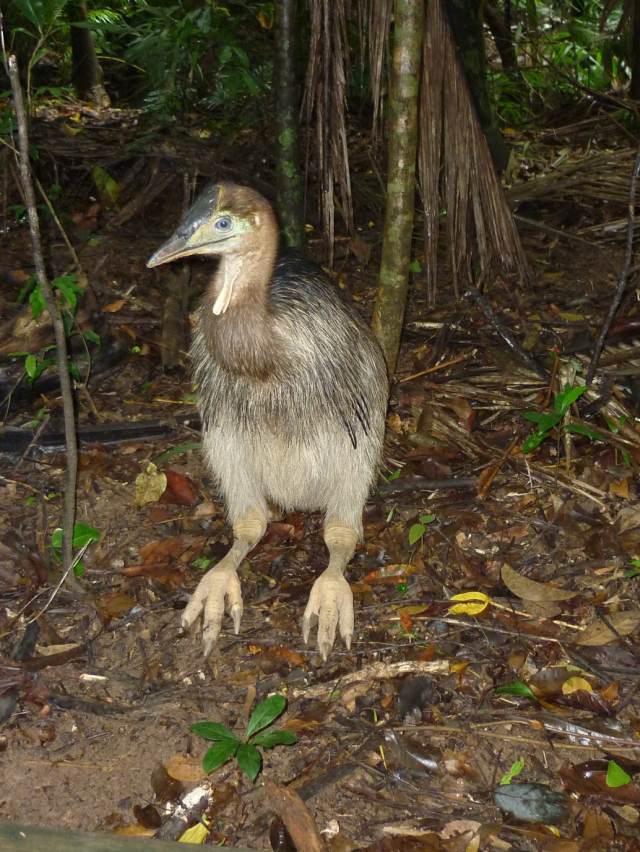 It is perhaps unfair to single out places and people, as everywhere we stayed was friendly, welcoming and comfortable. But for the birder, I'd mention three places and two boat trips. The places first:

Stay where you like in Cairns, but go for a walk along the esplanade as the tide is coming in. Apart from the ubiquitous Rainbow Lorikeets in the trees around you, the mudflats gave perfect views of ibis, pelicans, egrets, herons, cormorants, terns and teeming waders that stretched my identification skills. 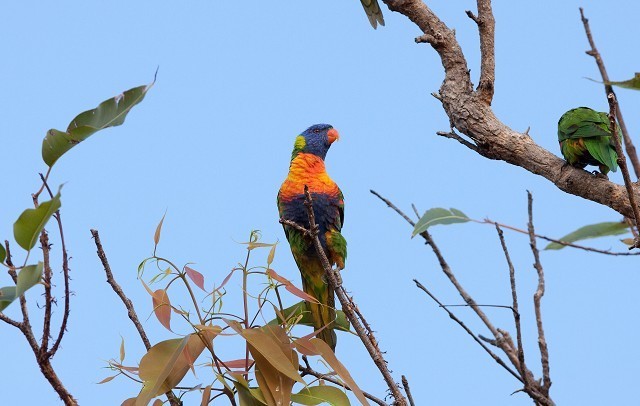 We spent two nights at Rose Gums Wilderness Retreat on the Atherton Tablelands, inland from Cairns. Jon and Peta Nott have created a special place, with individual tree-houses surrounded by forest and out of sight of each other. What could beat forest birding from your balcony in the early morning, with a fresh pot of local coffee at your side?

We also spent two nights at Red Mill House in Daintree village. Andrew and Trish Forsyth were great hosts, sharing their home and knowledge of all the local wildlife with us. Apart from the new birds in their garden, we appreciated the Bandicoot on the lawn at night, and the White-lipped Tree Frog on top of a picture in the lounge of the 'Queenslander' house — and the breakfasts.

And the boat trips. They were a bit short of wildfowl on the Mareeba Wetlands, as they were all still floating around the flooded south of Australia. But there were still some birds, and fish, and plants, to be discovered. And we appreciated the kangaroos that crossed the road in front of us as we left the reserve. A trip down the Daintree River at dusk was rather wet, but we spotted a crocodile (not Arthur, though, who picks cows off the bank for a snack), and, almost as good as the Cassowary, a nesting Papuan Frogmouth.

Finally, many, many, thanks to the ARF and all the prize-givers for their generosity. Here we are, planting our tree! May it and the forest and the Cassowary thrive, and I hope that I may just get back there again. 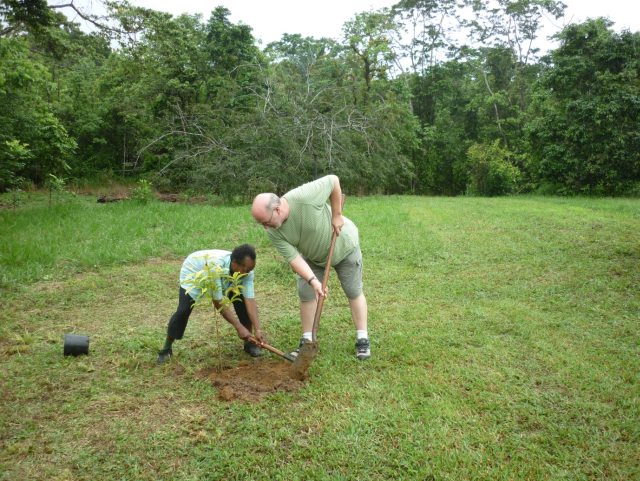 Jon and Maxine plant their rainforest tree in support of the cassowary project (Photo: ARF)