In January, the British Ornithologists' Union Records Committee (BOURC) announced a review of the status of Ruddy Shelduck on the British List (see Birdwatch 345: 59). The species is currently in Categories B, D, and E of the list, but is potentially occurring in Britain as a vagrant from established naturalised populations on the Near Continent, and so should be treated as a candidate for Category C5 (a vagrant naturalised species from outside Britain).

This category was added to the list in 2005 in recognition of increasing naturalised populations of several species on the Near Continent. Currently only a single species – Egyptian Goose – is listed under this classification, owing to a ringing recovery from the feral Dutch population. The BOURC is now gathering records of Ruddy Shelduck in Britain to aid the review and to help determine whether a change of category for this species is justified.

In its native range, Ruddy Shelduck breeds from south-eastern Europe across Central Asia, wintering in South-East Asia and the Indian subcontinent, with a resident population in North Africa. Europe is currently estimated to host 33,900-53,100 individuals (BirdLife 2015), with the nearest populations to Britain located in Ukraine, Romania and Bulgaria.

It is popular in collections and commonly kept in captivity in the UK and abroad. Many birds are suspected to escape annually, usually after the summer moult when some keepers fail to round up all birds for feather cutting. Escaped individuals have been known to breed in the past, the majority in southern and eastern England. 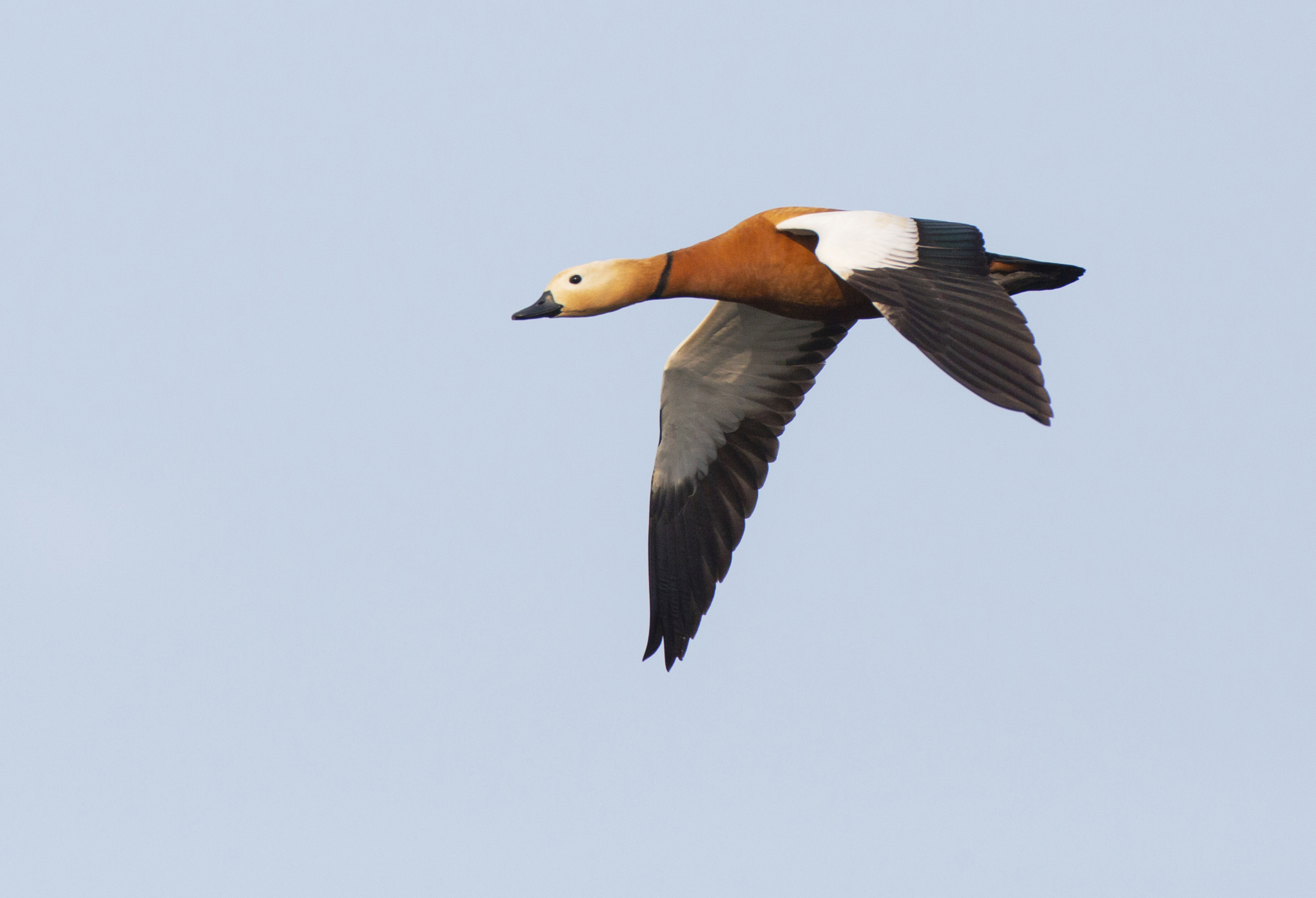 Migrating Ruddy Shelduck passing through The Netherlands could be the source of birds in Britain (Agami / Edwin Winkel).

The species' position in Category B of the British list is thanks to a major irruption from Central Asia in 1892, which deposited birds across north-west Europe in late summer. Some 59 birds across Britain and Ireland included a flock of 20 in Co Donegal (Harrop 2002). Remarkably, three made it as far as Greenland, with seven in Iceland.

Smaller influxes throughout the 19th century followed, while a major arrival in 1994 saw birds across northern Europe, with the majority in Fennoscandia. A number of these were thought to have reached Britain, including a flock of 12 in Cheshire and six in Devon and Cornwall. These were placed in Category D – for species where there is reasonable doubt that they have ever occurred in a natural state – as it was determined at the time that there was insufficient proof of genuine vagrancy, with no noticeable net increase in numbers in the UK, and several proven escapes also present (Harrop 2002).

Notably, conclusive proof of birds from the Eurasian Steppe reaching central Europe was provided when a bird ringed as a chick at Song-kul, Kyrgyzstan, in 1973 was found dead in Poland five years later (Vinicombe and Harrop 1999) – a movement of around 4,000 km.

In recent decades, increasing numbers of Ruddy Shelduck have been visiting The Netherlands to moult between June and August, with approximately 100 birds at the turn of the century across four sites: Lauwersmeer, Ventjagersplaten, Kreupel and Eemmeer. Since then, the moulting population has steadily increased, with 827 recorded in July 2013. By the summer of 2018, the four key locations hosted a combined 1,935 birds, a total substantially higher than the small Dutch feral breeding population of 10-30 pairs.

The birds are thought to moult at traditional safe areas with a reliable food supply, as they become flightless during the process. A similar phenomenon is seen in Common Shelduck, with up to 100,000 birds from across north-west Europe migrating to the German Wadden Sea each year to moult (Vinicombe and Harrop 1999).

The Werkgroep Casarca Nederland was founded in 2012 to discover the origin of these birds, with the group ringing and satellite-tagging several birds on the Eemmeer. The research, published in Limosa (Kleyheeg et al 2020), showed that the majority originated from two distinct feral populations originally comprised of escaped birds: one in Germany's North Rhine-Westphalia, and another across Bavaria and Baden-Württemberg, Germany, as well as parts of Switzerland. 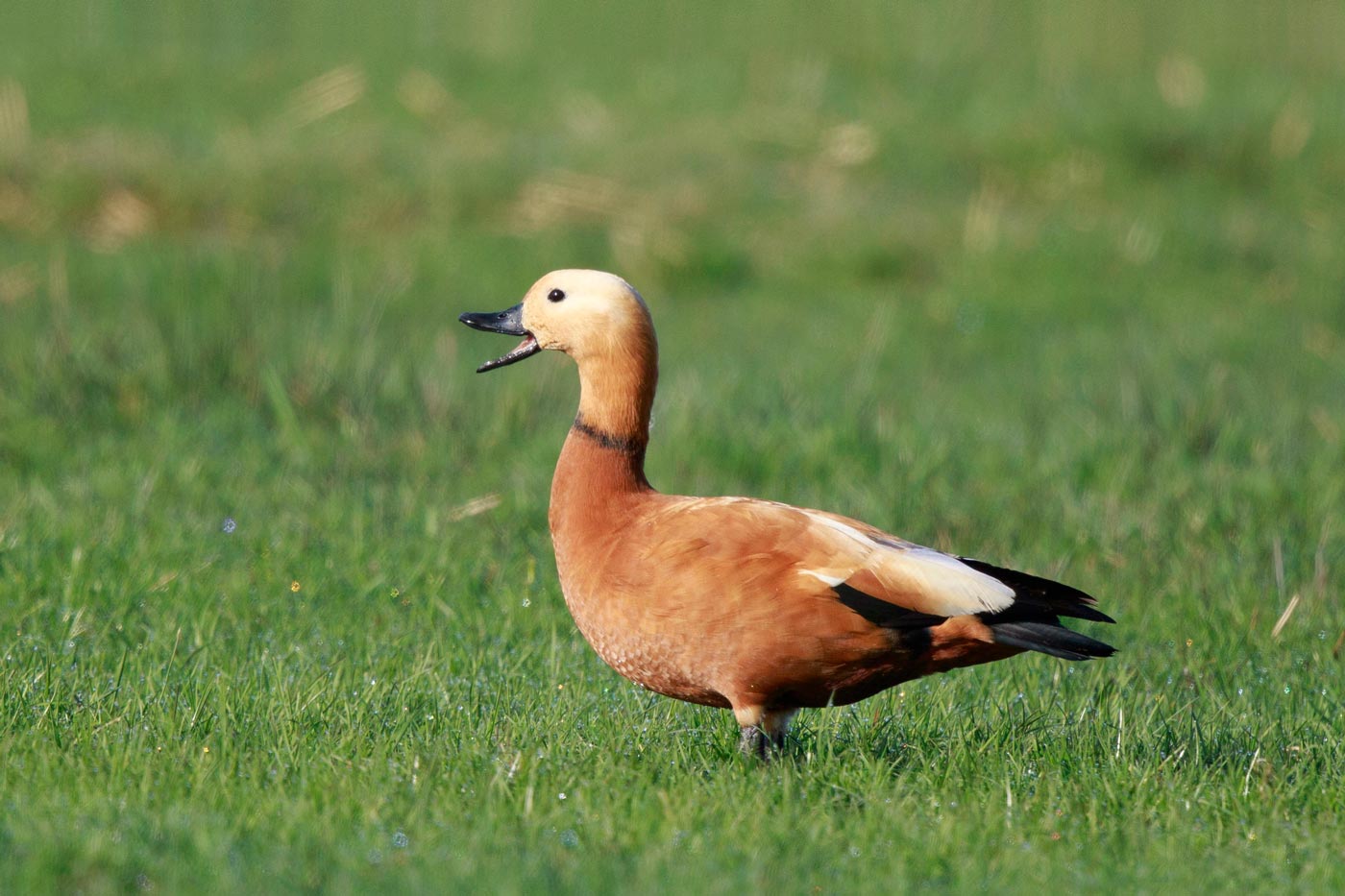 Birds from a naturalised population in North Rhine-Westphalia, Germany, stop off in The Netherlands to moult (Hans Glader / BIA).

Ruddy Shelduck typically arrive at their Dutch moulting sites from early June, with most birds present by mid-July. After numbers have peaked – often in the third week of July – moulting birds begin to depart the area from the first week of August, while a small number remain throughout the autumn. The majority return to Switzerland and southern Germany throughout the winter.

Although the Swiss-German breeding population has been present since the 1960s (Kestenholz et al 2005), it has undergone a rapid population expansion, with a conservative population estimate of no fewer than 3,600 birds in 2018.

Further afield, there is a feral population of several hundred pairs around Ukraine's Askaniya Nova Zoo (which interbreed with the local wild population) and another well-established population around Moscow, Russia (Vinicombe and Harrop 1999; eBird).

A lot has changed since the last review of the species' status in Britain, which failed to conclude that it had occurred in a wild state beyond reasonable doubt since birds from the 1892 irruption (Harrop 2002). However, the number of birds involved has significantly changed over the last two decades, with the population of moulting individuals in The Netherlands skyrocketing in tandem with feral populations across Germany and Switzerland. When the BOURC last considered Ruddy Shelduck's status, the situation was far more complicated, with an unclear picture of feral European populations, escapes from waterfowl collections and potential long-distance vagrants.

Although historic records in Britain undoubtedly comprise a number of escapes from captivity, there is an increasingly strong pattern to the species' occurrence. A small peak in March and April – coinciding with the timing of the birds' spring migration – is followed by a noticeable spike in late summer and early autumn, peaking between July and September – a similar trend to that of classic western European invasion years. Small numbers remain throughout the winter, bottoming out in February.

A substantial proportion of records at these peak times tend to involve small flocks, described by Vinicombe and Harrop (1999) as entirely consistent with an irruptive species and at variance with that of other 'conventional' vagrants or escaped ducks. 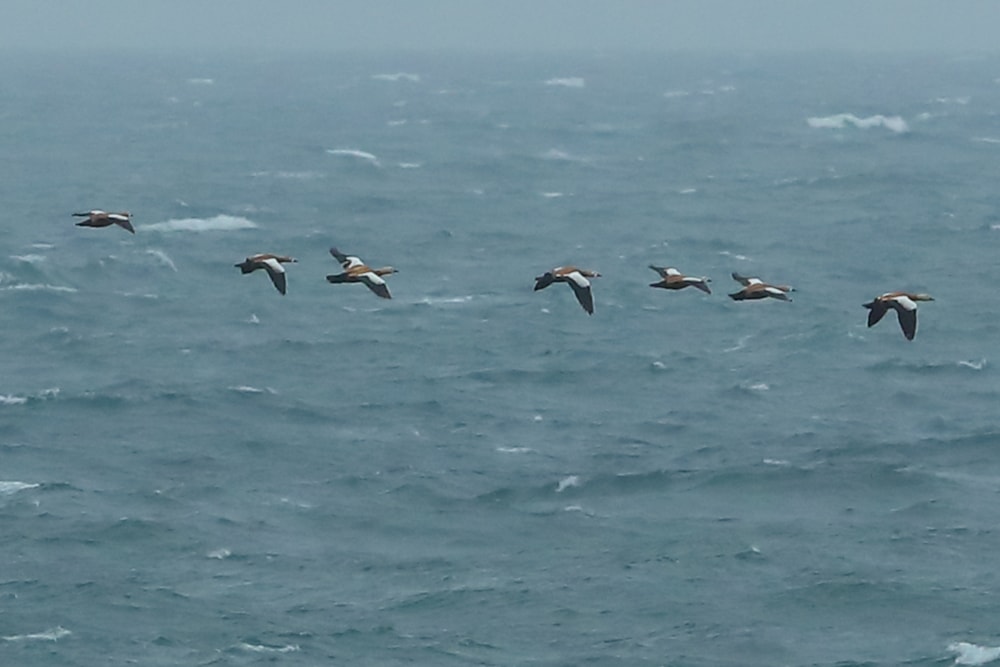 Late-summer flocks of Ruddy Shelduck in Britain correlate with birds that have either overshot or dispersed from The Netherlands (Mike Trew).

An analysis of records reported to BirdGuides.com paints a clearer picture. Of the 101 reports between 2005 and 2020 comprising flocks of four or more individuals, 86 (85%) occurred between June and September. Of these, a considerable majority (68%) were reported from locations along the east coast, with only 17% from western locations. Such occurrences appear to be becoming commoner: more than 10 flocks containing four or more birds were reported in 2020.

The arrival times of these small- to medium-sized flocks during late summer with an east coast bias correlate with birds that have either overshot The Netherlands on their way to moult or dispersed from The Netherlands after moulting.

On the balance of probability, it seems unlikely that these events relate to escapes from collections, particularly the now-reliable small flocks in late summer. Instead, the available evidence suggests that many Ruddy Shelduck sightings in Britain relate to individuals from the naturalised and established population on the Near Continent, and that these birds are consistently overshooting or dispersing from their moulting locations in The Netherlands, a short distance away from the coast of south-east England.

The BOU requires all records of Ruddy Shelduck in the wild in Britain in 1994 and in all years between 1999 and 2020, including proven or suspected escapes, known releases, and any records of breeding in Britain. All records should be sent to ruddyshelduck@outlook.com.