Germany has weakened its nature conservation act this summer in order to fast-track windfarm construction amid the global energy crisis.

The problem is that the flatlands marked out for a significant portion of the additional 16,000 turbines planned for construction by 2030 are key areas for Lesser Spotted Eagle, a conservation priority species in Germany. 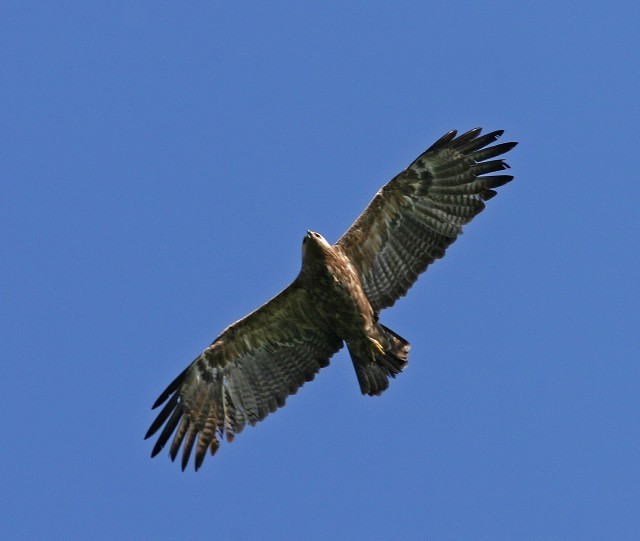 Lesser Spotted Eagle has declined by a quarter in Germany since the 1990s (Steve Wilce).

US company IdentiFlight has already used deep learning to train its artificial intelligence software to recognise Red Kite with a success rate of over 90%. Engineers are now doing the same with Lesser Spotted Eagle, so that cameras on a 10-m tower can recognise the birds approaching from up to 750 m away.

When the system is operational, the camera system will send a message to the turbine, which will enter 'trundle mode' in less than a minute, slowing down to no less than 30 seconds for every spin to allow the bird safe passage.

Eight dead Lesser Spotted Eagles have been found around German windfarms since 2002, a significant enough hit on the country's population to justify taking measures to minimise casualties. The system is on track for certification in 2023.

The policy reforms have been led by the Greens in the country's three-party coalition government, and the software may help them balance green energy targets with biodiversity and conservation.

The environment ministry has produced a list of 15 birds at high risk of collision and now only those species can stop a planning application. Among other changes, turbines can no longer be switched off for the entire breeding season, nor if doing so temporarily means a 4-8% drop in production, and the distance at which a windfarm can be built from a Lesser Spotted Eagle's nest has halved to 1.5 km. The system has already been trained to recognise approaching Red Kites with 90% accuracy (Keith Salmon).

Conservationists say the new limit on proximity to eagle nests might affect 10 nesting pairs in the state of Mecklenburg-Vorpommern. With accusations of violation of EU environmental law, the changes could see scrutiny in court.

The global population of Lesser Spotted Eagle is stable at 40,000-60,000 mature birds and the species is doing well in parts of eastern Europe. However, the German population has dropped by a quarter since the 1990s due to habitat loss.

Wolfram Axthelm, Chief Executive of the German Wind Energy Association (BWE), said: " As a society, we have to start asking ourselves some basic questions. Do we want to build windfarms because we want to mitigate climate change and protect the environment as a whole? Or do we want to save every individual bird?"

"We have to concentrate on the population as a whole," he added.