Ghana has lost 90–99 per cent of its African Grey Parrot (Psittacus erithacus) population in the past two decades, according to a study recently published by a team of researchers from Ghana and the United Kingdom.

The population decline of Grey Parrot, a heavily traded cagebird species, is evidenced by the near-total loss of the major roosts known in 1992. Further evidence indicates an almost a tenfold reduction in bird encounter rates observed in the 1990s compared to 2014, as well as the perceptions of 96 per cent of the almost a thousand residents that were interviewed during the study. 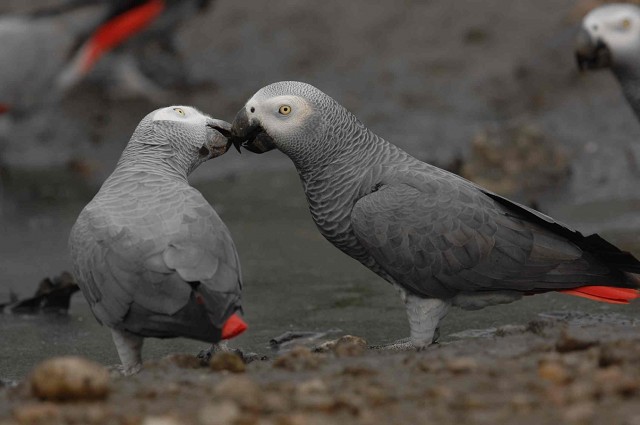 African Grey Parrot populations in Ghana have declined catastrophically and the species is now very rare across the country (Photo: Reto Kuster)

"Dedicated searching, including visits to roosts which previously had as many as 1,200 individuals 20 years ago, yielded just a handful of Grey Parrot sightings," said Nathaniel Annorbah, a Ghanaian graduate student of the Manchester Metropolitan University, and the lead author of the scientific paper published in Ibis. "Grey Parrot populations in Ghana have declined catastrophically and the species is now very rare across the country," added Dr Nigel Collar from BirdLife International.

"Illegal trade must surely have contributed to the post-1990 declines that we report. This is affirmed by the fact that in the years 1991–2012 when trade was outlawed and Ghana's reported exports of Grey Parrots totalled just 35 individuals, the population in the country still declined by 95 per cent," emphasized Dr Stuart Marsden from Manchester Metropolitan University.

"After a successful campaign to ban the trade in Grey Parrots lead by the Wildlife clubs of Ghana, the junior wing of Ghana Wildlife society this comes as a great disappointment," observes Mr Japheth Roberts of Ghana Wildlife society (GWS, BirdLife Partner in Ghana). "However, it shows us that there are challenges associated with sustaining conservation action and impact over the long term. Having achieved success before, this is the time for GWS and its partners to hit the ground running to arrest and reverse the catastrophic collapse of Grey Parrot in Ghana."

The situation for Grey Parrot is not only grim in Ghana, but in most of the west African region. Kariuki Ndang'ang'a, the BirdLife Africa Team Leader for Species Science, explained: "Lack of evidence from this and other studies that any Grey Parrot populations in the west Africa region are healthy suggest that trade in the species must surely be ruled out in the region."

In fact the authors question whether indeed there should be any further trade in much of mainland central Africa as well. The IUCN Red List classification of both Grey Parrots, and especially the much smaller-ranged Timneh Parrot (Psittacus timneh), clearly requires re-evaluating.

In 2013/14, the Africa Secretariat of BirdLife International and CITES supported stakeholders in Liberia, Sierra Leone, Democratic Republic of Congo and Côte d'Ivoire to draft national management plans for Grey Parrot, as well as update an existing one for Cameroon. These management plans including methods for monitoring populations and trade in the species must be implemented without delay.

Article adapted from that by Kariuki Ndang'ang'a on the BirdLife International website.