Across continents: conservation goes beyond borders

Mississippi Kite, Philadelphia Vireo, Tennessee Warbler, American Redstart and Louisiana Waterthrush: a list you might expect from a road trip around the United States rather than a trek through mountain rainforests of Caribbean Guatemala. But each of these species is one of the many Neotropical migrants that fly down from North America to winter in the warmer climes of Central and South America or the Caribbean islands.

Most of these are passerines such as warblers, thrushes, tanagers and vireos, although there are also many wader, raptor and waterfowl species that are considered Neotropical migrants, breeding in North America and following the warmer weather south for winter. It is not directly the temperature that makes them migrate, however, but rather their diets of flying insects, caterpillars, fruit and nectar that are not sufficiently available on their breeding grounds during the colder months.

Not much was known about the migratory ecology of these birds until the late 1980s, when several long-term studies showed that many  had been experiencing declines. The most probable cause seemed to be the loss and degradation of habitat in the Neotropics. The resulting concern led to the founding of the Neotropical Migratory Bird Conservation Programme (Partners in Flight, PIF), back in 1990, and there has been a considerable effort since then to learn more about the birds’ migratory paths and wintering habitats, to design the best strategies for their conservation.

One of the most prominent threats that came to light as a result of the research was the loss of both summer breeding and winter feeding habitats. One example is the striking Golden-cheeked Warbler, a small passerine whose contrasting gold-and-black markings make it easy to spot in the Ashe Juniper forests of its home state. The species is restricted to Texas in the US and relies on the state’s juniper forests for breeding before migrating down the Sierra Madre in Mexico and wintering in forests of Guatemala, Nicaragua, Honduras and Mexico. 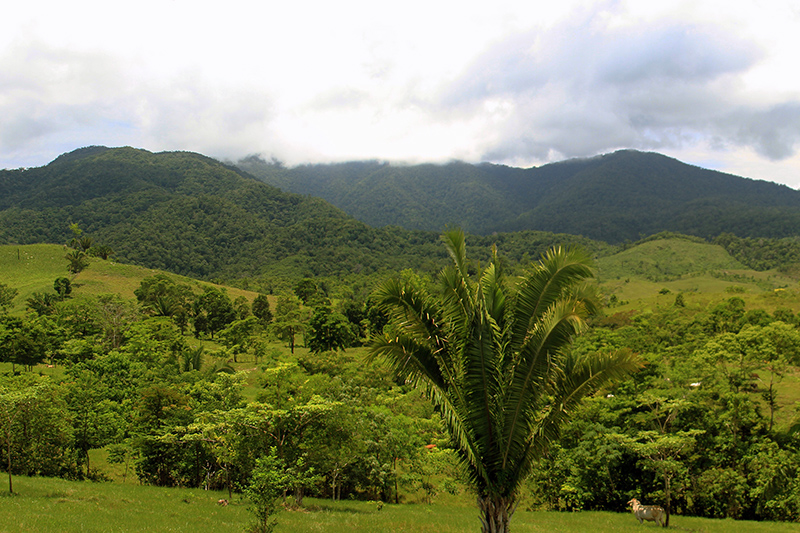 Sierra Santa Cruz in Guatemala provides vital habitat for migratory birds, but it is at risk from agriculture and cattle ranching.
Photo courtesy of World Land Trust.

Golden-cheeked Warbler is classified as Endangered due to the decline and fragmentation of its breeding and wintering habitats. The Ashe Juniper forests in Texas have been under clearance for land development and agriculture, but the IUCN classification for the species says: “The main cause of decline may be logging and firewood-extraction, and agricultural conversion for cattle reducing pine-oak habitats in southern Mexico, Guatemala and Honduras.”

Various organisations are involved in the preservation of the tropical habitats that are vital for the survival of Neotropical migrants. The Foundation for Eco-development and Conservation (FUNDAECO) has been working to create a network of protected areas, saving the remaining forests of Caribbean Guatemala from clearance for cattle ranching and oil palm plantations. This region is a rich habitat for birds migrating between the Americas, as both a destination and a stop-over site for species travelling further south (such as Blackburnian Warbler, Eastern Wood-Pewee and Canada Warbler).

“The plight of declining migratory bird species needs to be considered as a message about the importance of international conservation – these birds do not operate within political borders, and to ensure their conservation, neither should we,” commented Marco Cerezo, General Director of FUNDAECO. “Golden-cheeked Warbler is a good example of a species facing habitat loss in North and Central America, and we consider our efforts in protecting its habitat in Central and Caribbean Guatemala as an important part of the conservation effort for this species across continents.” 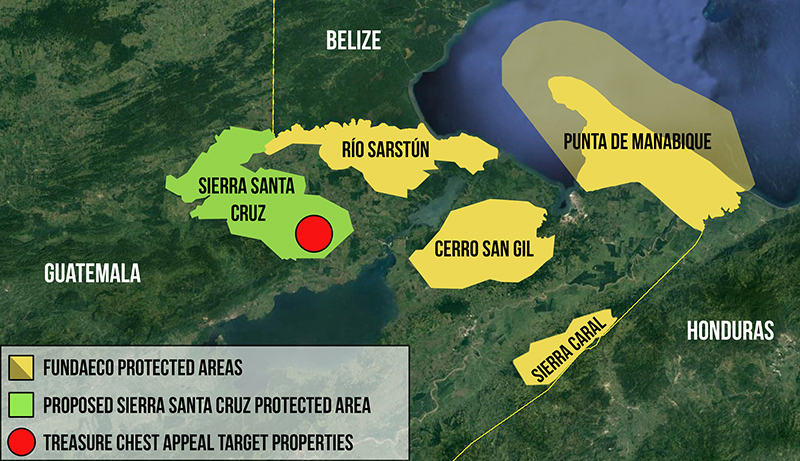 FUNDAECO is currently working with international wildlife conservation charity World Land Trust (WLT) to save the last unprotected rainforest in Caribbean Guatemala, the forests of the Sierra Santa Cruz mountain range. The Treasure Chest Appeal was launched by WLT in early October, and aims to raise £625,000 for the purchase and protection of a 2,500 acre (1,000 hectare) reserve within Santa Cruz which would become the core of a larger protected area in the future.

Dan Bradbury, Deputy Director of Communications and Development at WLT, said: “Sierra Santa Cruz is an incredible hot-spot for biodiversity in the Caribbean.” “In addition to 45 migratory species that winter or transit through Sierra Santa Cruz, such as Golden-cheeked Warbler, there are 214 resident bird species that have been recorded, including globally threatened species like Great Curassow, Great Tinamou, Keel-billed Motmot and Ornate Hawk-Eagle. Protecting the tropical forests in this region is of incredible importance for the survival of the threatened neotropical migrant and resident birds found here.”

To find out more about the Treasure Chest Appeal to save Sierra Santa Cruz, visit the WLT website.

All donations made to the Treasure Chest Appeal before midnight October 18, will be doubled by the sponsors of WLT’s Big Match Fortnight.