A salutary lesson in the perils of inflation

The other day, an MP, some councillors (including His Worship the Mayor), a handful of teachers and a vicar — all supposedly upright and respectable members of society — took a large carrier bag full of bits of litter and scattered then on a nature reserve.

Since the Environmental Protection Act 1990 unequivocally makes it is an offence to drop 'or otherwise deposit' litter in a public place, you might think they would have been arrested for committing such a foolhardy, anti-social act, then berated in the press, and hounded out of office. Or dragged to court and served with an "ASBO". Or at least received an "on the spot fine", or fixed penalty. But no: several of the policemen present were observed laughing and smiling. In fact, the most senior officer even joined in!

To tell the truth, they didn't actually scatter the litter directly on to the nature reserve. First they filled some of the pieces with helium (they were, of course, balloons) and tied other pieces of litter, plastic ribbon, to them. Then they let them go, and away they floated. 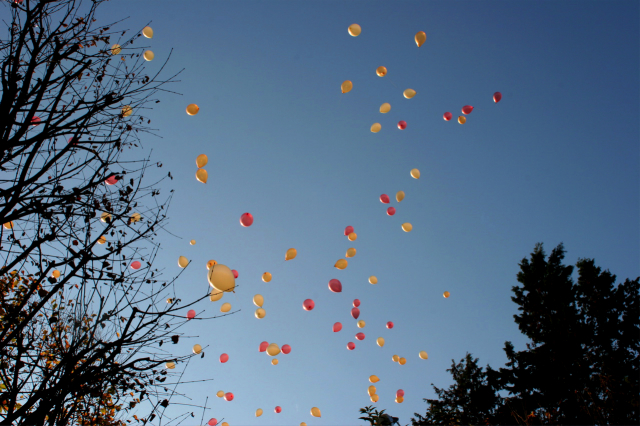 As you no doubt already know, what goes up must come down, and sure enough, down came each of those balloons.

Many shattered into tiny fragments, after freezing at altitudes as high as ten kilometres. They fell like rain onto the nature reserve. And, from such height, onto a vast area, including farm fields, and into the sea. Perhaps even onto your garden, or your local patch.

But some of the balloons landed intact. New Scientist magazine report that between 5 and 10% of balloons that are released do not burst, but land whole, though partially deflated. In the USA, over 32,000 intact balloons were picked up on beaches during one year by one conservation organisation alone.

What do you think happened, when those pieces of litter and semi-inflated balloons were eaten by wildlife, farm animals or pets? To a bird or other animal at sea, a piece of floating balloon will look just like the jellyfish they usually eat. Evidence has already been found of birds, dolphins, fish, Loggerhead Sea Turtles Caretta caretta, Leatherback Turtles Dermochelys coriacea, and Blue Sharks Prionace glauca suffering or dying, their stomachs blocked as a result of eating latex balloons. In 1985, an infant Sperm Whale Physeter macrocephalus was found dead of starvation after swallowing an inflated biaxially oriented polyethylene terephthalate (boPET) polyester film balloon (the shiny, metallic-looking balloons sold under the brand name "Mylar", or similar) which had lodged in its intestines. A juvenile Green Turtle Chelonia mydas washed up at Knott End-on-Sea beach near Blackpool starved to death in December 2001, after a balloon blocked its gut. If strings are tied to balloons, birds and other animals may become tangled in them, leading to suffocation, starvation or drowning. There have even been cases of chicks becoming so entangled, after their parents have used plastic ribbons to build their nests. In Devon, farmers report having to call out vets to cows with balloons lodged in their throats. 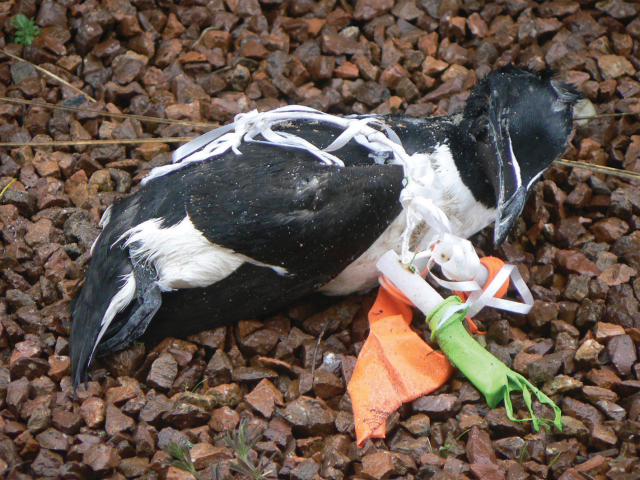 Because balloon litter poses a threat to wildlife and domestic animals — and is very unsightly, too — the Ross-on-Wye–based Marine Conservation Society are campaigning to stop balloon releases, both by persuasion in the short term and, eventually, through prohibitive legislation. They are supported in that campaign by a large number of reputable organisations, including the RSPB, the RSPCA, the National Farmers' Union, the Tidy Britain Group, Keep Scotland Beautiful, county bird clubs, various Wildlife Trusts and other organisations. Overseas organisations opposed to balloon releases are as diverse as the Caribbean Conservation Corporation, Clean Virginia Waterways and the Sea Turtle Survival League.

"Promotional releases of balloons that descend into the sea pose a serious ingestion and/or entanglement hazard to marine animals."

"We're not out to spoil anyone's fun and we're not against the sale or use of balloons for celebrating special events as long as they're disposed of properly afterwards. But releasing them into the air is what causes the problem and as a responsible Council it's our duty to raise awareness of the risk to wildlife and to do all we can to minimise that risk. Balloons released in Plymouth get caught on the prevailing winds and are carried straight onto Dartmoor, into the countryside of the South Hams and into coastal waters. The threat they pose is simply unacceptable."

A month previously, Prestonpans Infant and Nursery School in East Lothian became the first school known to have banned balloon releases, earning support from their local council's biodiversity officer, their MP, their MEP and, most importantly, the local community.

The people who manufacture and sell balloons are quick to defend the practice of releasing them, but to paraphrase the immortal words of Mandy Rice-Davis, "Well, they would, wouldn't they?" They argue that latex balloons are biodegradable — which, to be fair, they are; but a latex balloon on land can take up to six months to break down. In other words, they linger as long as an oak leaf. But worse than that, in salt water, such as at sea, they break down much more slowly, retaining their elasticity for twelve months or more. And while a balloon may degrade over many months, it's hardly a safe thing in the meantime. You wouldn't be so reckless as to give one to a baby to play with, for fear of choking, so why would you allow an animal to eat one? 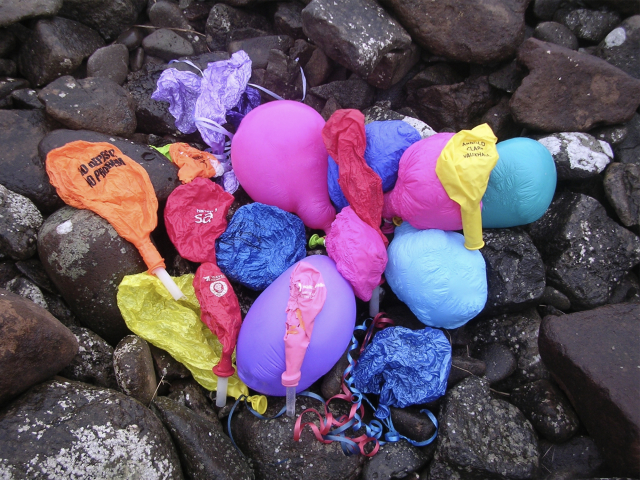 In the United Kingdom, the National Association of Balloon Artists and Suppliers, "the only independent national trade association for balloon decorators, retailers, wholesalers and manufacturers and suppliers of balloon-related services", has a code of conduct for balloon releases, aimed at minimising their environmental impact, but even they concede:

"Problems can arise when a balloon is not inflated properly or fully or is carrying too much weight and therefore does not reach the height at which shattering occurs. This situation causes a potential danger to wildlife and the environment."

"problems may occur if a partially inflated balloon is ingested, causing possible blockage of the alimentary tract."

What can you do to help?

Sign the MCS petition to have balloon releases made illegal, and consider joining the MCS.

If you are a member of a county (or similar) bird club, ask them to agree a policy of not releasing balloons, and opposing balloon releases in general — if necessary, propose a motion to that effect at their Annual General Meeting (AGM). If you have children at school, let their teachers know that you will oppose balloon releases, and suggest safer alternatives. Write to your local councillors, asking them to agree not to participate in balloon releases, and to prohibit them at council events and at other events held on council land. Write to your MP, asking them not to attend balloon releases, and to support any future legislation restricting or prohibiting them. Please mention the Marine Conservation Society campaign when you do so.

If you see a balloon release mentioned in your local news media, write to the newspaper or radio or television station concerned, and to the organiser, expressing your opposition and explaining the potential for harm to wild and domestic animals. If the release is a future one, ask the organisers to do something different instead. Mindful that balloon releases are sometimes used to raise funds for good causes, the MCS propose several, more environmentally friendly, alternatives, including sponsored balloon-popping and "guess the number of balloons in the car" competitions, after which all the balloons can be safely gathered up and disposed of properly.

If you do oppose any recent or planned balloon releases, please notify the MCS, so that they might do likewise.

Andy Mabbett is a trustee of the West Midland Bird Club, an RSPB volunteer and member of the MCS, but writes here in a personal capacity.
Written by: Andy Mabbett
Login to leave a comment
Return to List