White-faced Plovers have been detected wintering in very small numbers in Malaysia, Thailand and elsewhere in southeast Asia, and are now regularly sighted from December to February. The whereabouts of their breeding grounds was unknown, other than small numbers sighted at two locations in Fuzhou, China — on Hainan Island and around the Minjiang estuary. It was therefore with considerable excitement that I found two beaches on the Guangdong coast harbouring no fewer than 279 White-faced Plovers. 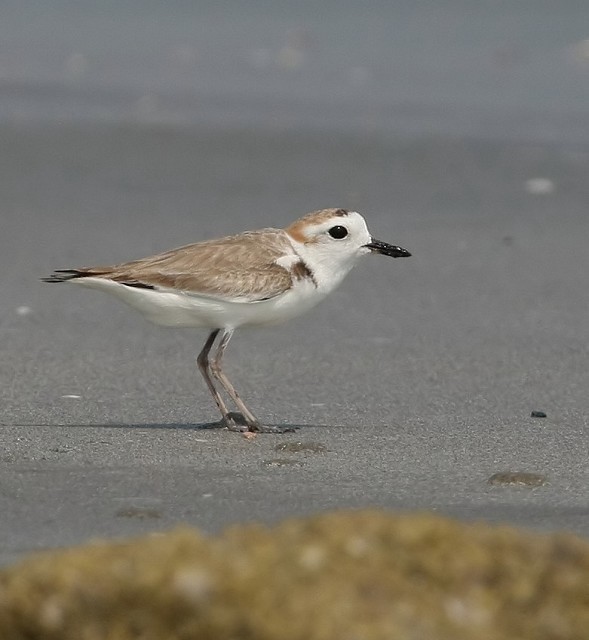 I arrived in Shenzhen at the end of January having previously worked in Beijing for three years. Since then, I have spent most weekends birdwatching along the coastal areas about two and a half hours by bus to the east of the city, near to the two towns of Haifeng and Lufeng. Xiao Cao, a local birder, had kindly given me some information about Haifeng, including the fact that terns frequent a sand-spit near Dahu beach in summer. The terns, mostly White-winged, Whiskered, Little, Common and Greater Crested, started to arrive in early May. It was at about this time that I noticed there appeared to be numbers of Kentish Plovers on Haifeng beach that, unexpectedly, hadn't migrated northwards. I mentioned this to Martin Hale, a friend in Hong Kong, who also thought it was odd.

On the weekend of 21st May I decided to try another beach area, which appeared to be closer to the terns. This involved relocating to Lufeng, a town about 25 km (50 minutes by bus) east of Haifeng. I noticed on the map that there was a small village, Shanghaizai, situated about 6 km to the southwest of Lufeng that was near to where I wanted explore. I managed to get lost and ended up on the wrong point — which, I may add, was totally birdless — but I persuaded a local fisherman to kindly ferry me over to Shanghaizai beach.

Shanghaizai beach is about 3.5km in length, and virtually deserted apart from a few itinerant camping fishermen and their dogs. I immediately started to see pale greyish "Kentish Plovers" with long greyish/flesh pink legs, at least 30 birds in total. They were quite distinctive once I looked at them more closely. As well as the plumage colour and longer tarsi, the beak was thicker and stronger-looking than nominate Kentish Plover and the supercilium was whiter, longer and broader. They had a very upright stance which, with their longer tarsi, gave them a tall appearance similar to an Oriental or Greater Sand Plover. They also had a stronger white wingbar than in Kentish Plover. The females in particular were much whiter around the eye, while the males had a short dark shoulder-patch and a steep, extensively white forehead. 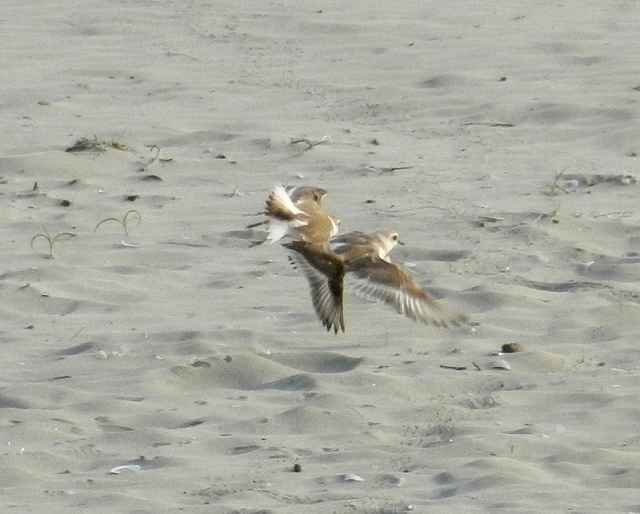 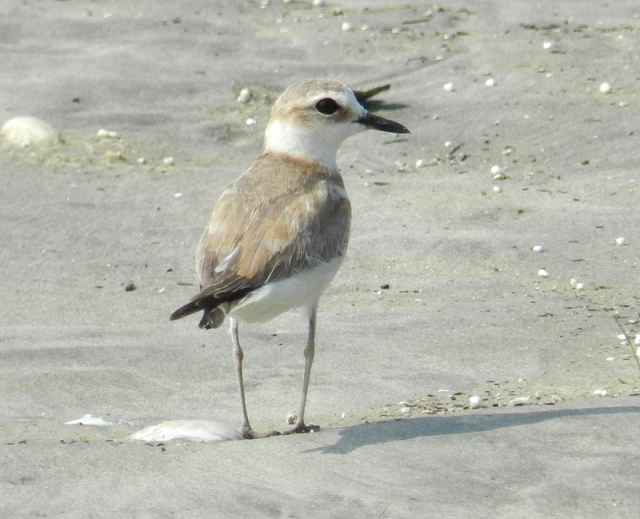 Following my discussion with Martin, I was carrying some field notes with me for White-faced Plover; after checking them, I was fairly certain that these birds were indeed White-faced Plovers. Having never seen the species before, I decided to check their ID with Peter Ericsson in Thailand, whom I knew has seen them regularly during the late winter months. Peter immediately confirmed the identity of my birds and forwarded my photographs to Dave Bakewell. One of the first things noted was that these birds are far paler than the birds that Dave and Peter are used to seeing in January in Malaysia and Thailand respectively. It is apparent that the males in particular lose most of their crown colour and appear washed out by May/June. Dave put me in touch with Peter Kennerley, his co-author on the fascinating original paper on these lost birds. 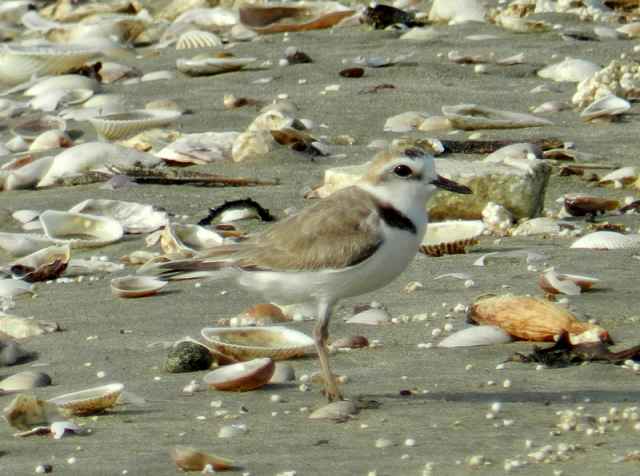 I counted 148 White-faced Plover adults on the beach along with seven juveniles and two chicks. Dave Bakewell informed me the most seen at one time previously was fourteen! I decided to check Dahu beach where I had originally seen numbers of late-staying "Kentish Plovers". On 29th May 2011, I counted 132 White-faced Plovers there; I found neither nominate-race nor eastern nihonensis Kentish Plovers amongst the dealbatus birds. The large numbers of apparent new arrivals included a number of quite brightly coloured male birds, which was surprising, and I wondered whether these birds were non-breeders or late-moulting birds.

Dave Bakewell suggested that the plovers might already be rearing their second broods and that the breeding season was virtually over. I am sure that this is the case because, when I returned to Shanghaizai beach on 4th June 2011, I found only 32 adults. However, amongst the adults I saw three juveniles and five near-to-fledging young. It is interesting to note that the young are much paler than both nominate and eastern nihonensis races of Kentish Plover, being sandy coloured with faint speckling. They also, uniquely, have greenish-yellow legs as opposed to greyish or pink. This colour is apparently lost by the time they are fully fledged, by which time the legs have become the same greyish-pink as the adults. 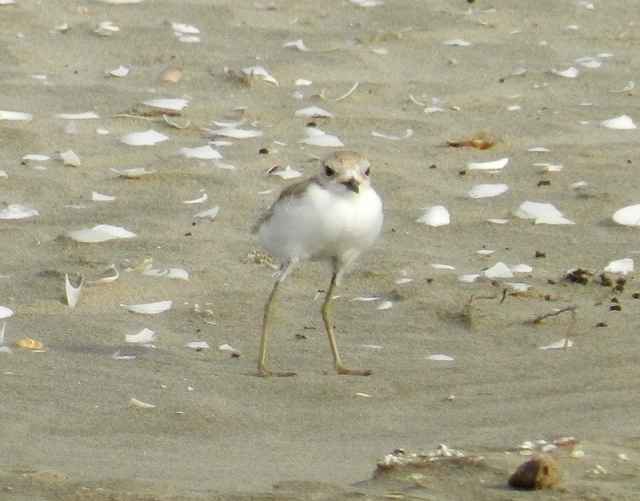 The beach nesting areas differ between the two sites; on Shanghaizai beach there are dunes at the back of the beach near the treeline, while on Dahu beach there is not much cover apart from some mangrove scrub that seemed to be favoured by the few breeding birds. The adult breeding birds are very aggressive and drive off any other adults that drift too close to their young. I also noticed on two occasions that mating followed brief chases, initially on the ground and then in the air.

I believe that these birds have possibly been using this area to breed for some time, as I saw a photo taken in June 2009 on Dahu beach which is definitely of a female White-faced Plover. If this is correct then I expect to find these birds back again next year, though I shall be checking the beaches much earlier in the year to attempt to ascertain the arrival date of White-faced Plover. It will also hopefully allow me the opportunity to find out whether the dealbatus birds arrive with Kentish Plovers or on their own. This could prove useful in trying to establish where this large population of White-faced Plovers is wintering. I have already checked my photos from spring 2011 and found two photos of White-faced Plover taken on 8th April. The last photo I took of a nominate-race Kentish Plover was on 4th April. Interestingly, none of the late-spring nominate- or eastern-race Kentish Plovers were found on the beach; all of my records were from the half-flooded ponds. It may be that White-faced Plovers arrive as the nominate or eastern Kentish Plovers move north; hopefully I will be able to go some way towards answering this question next spring. 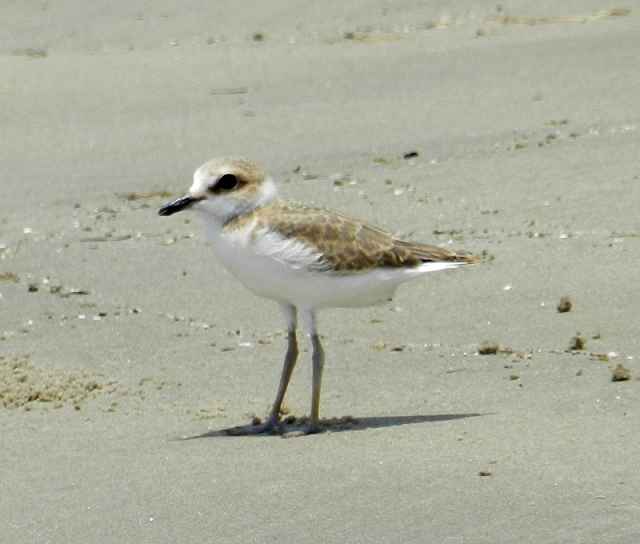 The major problem that now arises is how to protect this highly important breeding area, which is something everyone I have contacted is now considering. I hope we can come up with a sensible and practical plan, agreeable to the authorities, to protect these stunning birds. Undisturbed beach areas in south China are rare and can be transformed virtually overnight into "concrete holiday dormitories", which would be disastrous for the plover. You only have to travel to the west of Shenzhen to see what can happen to coastal zones in south China, as has also happened in areas of the USA and Europe.

If anyone should like further details about the two beach areas and local travel logistics please don’t hesitate to contact me.

In growing recognition of Robert Swinhoe's work in 1870 in originally discovering, collecting and describing this distinctive taxon, efforts are now being made to keep his name associated with the bird. It therefore seems fitting to suggest that, in future, Charadrius dealbatus be known by the English name Swinhoe's Plover.