Once upon a time the much-maligned Canada Goose drew scant attention from birders. Introduced to grace ornamental parks in England during the 17th century, the spread across much of our countryside is seemingly endless and many regard it as a nuisance on their local patch. The catholic tastes of these birds ensure that they can commandeer any patch of water, much to the chagrin of the local species (and observers!). Previously, most birders perhaps considered that the most exciting thing about Canada Geese was their moult migration flight to the Beauly Firth in Scotland and their occasional hard-weather movements overseas.

Recently, Canada Geese, along with many other species, have become the focus for birders interested in separating identifiable forms, or races. The current vogue is a mercurial sport, but is becoming increasingly well documented. Much of this is perhaps driven by the desire to see certain species split in the future, but hopefully also to monitor the occurrence of these birds in Britain and Ireland and assess their true status.

During the past few weeks on Bird News Extra we have been publishing records under 'Canada Goose' of Lesser Canada Goose, Richardson's Canada Goose and Cackling Canada Goose, and you may well have wondered what we were referring to. In actual fact we have not been making up names for our own amusement, but these refer to the vagrant Canada Geese which regularly turn up in small numbers in Britain and Ireland in winter, many of which can be assigned to one form or another based on a combination of identification features.

This short article provides a quick overview and background to these vagrant Canada Geese. Such birds often look strikingly different to the feral population that we are all used to feeding down at the local park, and are usually located amongst carrier flocks of wintering Barnacle Geese, Pink-footed Geese, Greylag Geese or Greenland White-fronted Geese. However, there are a number of feral 'vagrant types' roaming the countryside, so the ones considered to relate to genuine vagrants are those with large flocks of wild geese in Scotland and Ireland.

At least four forms considered to relate to genuine vagrants have been identified in Britain and Ireland (in addition to nominate birds), plus minima is a long distance vagrant and is a long shot for potential vagrancy. The main features of each are listed below, but a combination of features needs to be used in order to assign a bird to a particular form, and that is not always possible:

Cackling Canada Goose minima This is the smallest and darkest of the vagrant forms, with a small bill and a short neck and is similar in size to a Brent Goose; minima breeds in coastal western Alaska and winters from California to northern Mexico.

Richardson's Canada Goose hutchinsii This is the smallest of the pale forms with a thick straight neck and a small bill; hutchinsii breeds in Arctic Canada and winters on the Gulf coast of Texas and Mexico.

Taverner's Canada Goose taverneri Small, with a short bill and square-headed appearance. Many, but not all, show a dark throat line which divides the white chin strap; taverneri breeds from the Mackenzie River westwards and winters on the western seaboard southwards to California - this is one of the least likely forms to occur, but one in Ireland was assumed to have become caught up with carrier species wintering on this side of the Atlantic.

Todd's Canada Goose interior The largest of the vagrant forms, only slightly smaller than canadensis with a long, thin, neck and a long bill, with narrower feather fringes to the upperparts; interior breeds to the south and east of Hudson Bay and winters in southeastern USA.

Opinion is divided as to exactly how many different forms occur, but it is considered that up to 11 are recognised, possibly of four species. Of these, up to five forms have occurred as vagrants on this side of the Atlantic, whilst nominate 'Atlantic' Canada Goose canadensis breeds in southeast Canada and northeast USA and winters on the Atlantic coast of the USA, and is therefore the most likely of the North American Canada Geese to occur as a vagrants. Conclusive proof to isolate a vagrant canadensis from our feral birds would require a bird with a traceable neck collar. Just to add more confusion, or perhaps interest, the Dutch recognise two species: Canada Goose Branta canadensis and Lesser Canada Goose Branta hutchinsii, with the latter including the small races (minima, leucopareia, hutchinsii), but confusingly not parvipes which is under Canada Goose. The Dutch approach might be better labelled as 'big ones' and 'small ones'...crystal clear so far?

This is a very brief introduction to vagrant Canada Geese. Familiarity with the variation in your local geese is a good starting point before heading off north and west to the wintering grounds of wild geese to search for your own. Once a vagrant is suspected, good views and attention to detail are key factors in attempting to allocate a possible vagrant correctly to a particular form. Potential vagrants elsewhere would be difficult to prove beyond all reasonable doubt as many of the smaller race birds are commonly kept in captivity and escapes regularly attach themselves to local geese flocks.

The first record of a 'small race' bird was on Islay in 1958, but it is only recently that vagrants have been subjected to closer scrutiny and more serious attention by the birding masses. The only proven vagrancy involved a Lesser Canada Goose parvipes. Two birds were with Pink-footed Geese in Aberdeenshire between November 1992 and January 1993. One of these birds had a neck collar fitted and was shot. It transpired that this bird was trapped as a 2nd-year bird in Maryland in February 1992.

In the past few weeks, Taverner's, Lesser, Cackling and Richardson's have been seen on Islay, whilst a Lesser has been seen in Norfolk. Other birds have been seen at other sites, but their exact identity was inconclusive. Clearly the humble Canada Goose is perhaps not quite as boring as we all thought, but a review of the taxonomy might mean that we all have to start again 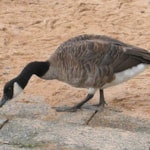 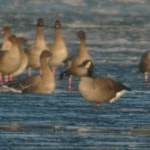 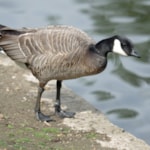 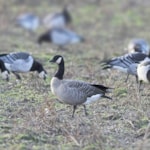 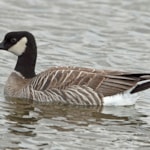