Sex on Earth: a Celebration of Animal Reproduction 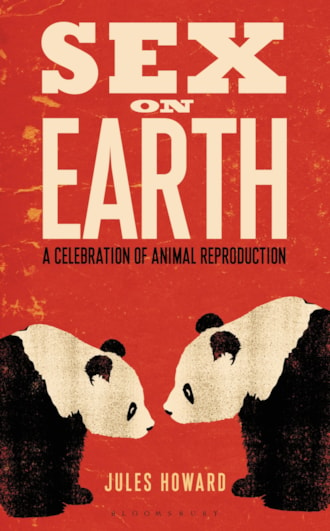 Written in a brilliantly engaging style by biologist Jules Howard, this fascinating and highly readable work covers the how and why of sex on Earth, in all its diversity.

1,000 million years ago, a sexual revolution occurred on Earth. Sex happened for the first time; from this moment the world became ever more colourful and bizarre, ringing with elaborate songs and dances, epic battles, and rallying cries as the desires of males and females collided, generation after generation. All of your ancestors took part and succeeded – an unbroken chain of sex right back to the dawn of complex life on Earth.

The world in which we live rings, bleeds, and howls with sex. It's everywhere. Right now warring hordes are locking horns, preening feathers, rampaging lustfully across the savanna, questioning the fidelity of the ones they love. Birds are singing, flowers bloom. A million females choose; a billion penises ejaculate (or snap off); a trillion sperm battle, block and tackle.

Written in a brilliantly engaging style by biologist Jules Howard, this fascinating and highly readable work covers the how and why of sex on Earth, in all its diversity. From sperm wars to cuckoldry, hermaphrodites and virgin births, spent males, racy harems, clitoral births, hips, breasts and birdsong, penis-percussion, and those riskiest and most elusive of all traits, monogamy and true love, all this and more is discussed in Sex on Earth, as Jules takes us on a voyage of discovery of the ins and outs of animal reproduction.