With price, performance and ergonomics in mind, American-based optics manufacturer Vortex has completely redesigned its entry-level Diamondback telescopes to match the look of its Viper HD and Razor HD ranges. Aside from the obvious aesthetic differences, the two models, 16-48x65 and 20-60x85, have been optically upgraded to include HD glass and larger objective lenses to improve image clarity and brightness.

Out of the impressively sumptuous box, the 65-mm model bears all the hallmarks of a perfectly crafted, robust and well-protected piece of kit. A new aluminium chassis is wrapped in dark spruce rubber, more smoothly textured on the upper side of the body, the latter bisected by a swish length of raised and grizzled whirling arcs, culminating in a 'rocket head' that bears the Vortex logo.

The focusing wheel is of a single, helical format, closely set into, and flush with, the chassis. Although initially appearing to be a little stiff, I found it turned smoothly, its finely ribbed black rubber covering, combined with its overall broadness, offering plenty of grip and making it easy to operate. 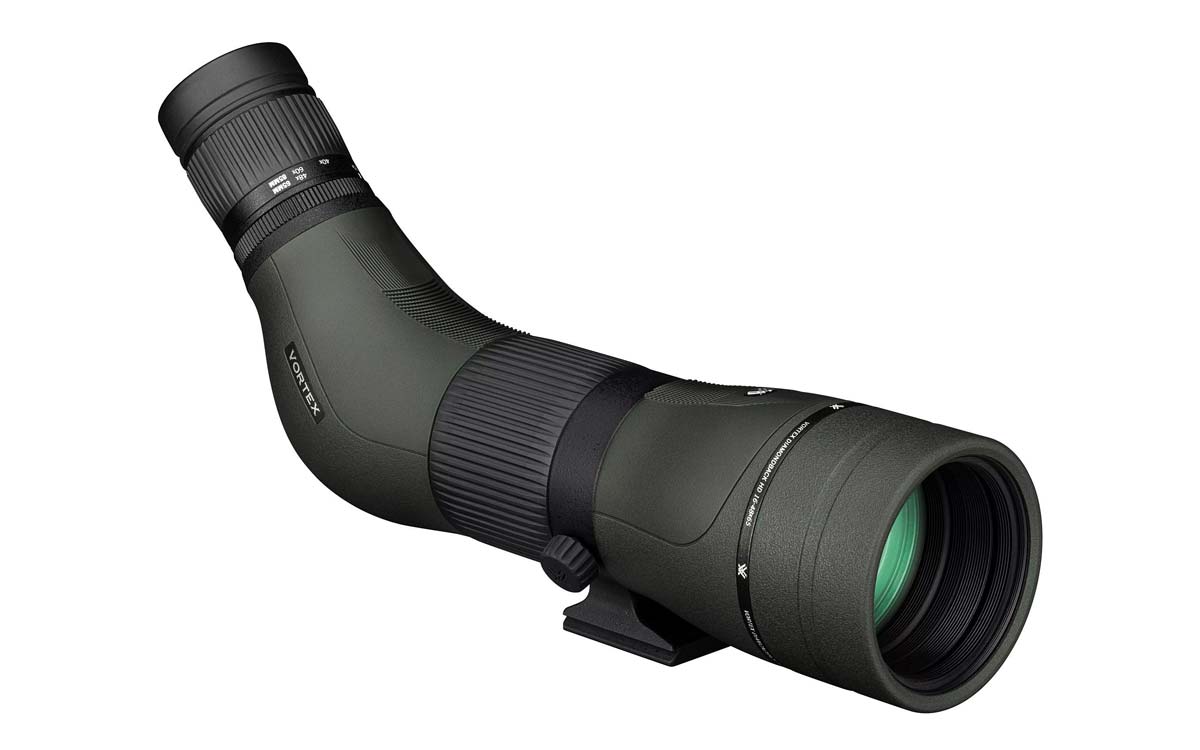 Immediately adjacent to this is the rotating tripod mount, which has eight equidistant click-lock positions. One key feature of the mount is an Arca-Swiss foot and this is now the same for all of Vortex's scopes, including the Razor HD and Viper HD. Bizarrely, the company appears to have omitted flagging up this very useful feature – designed to increase stability and to help adjust balance – in its specification and sales literature.

A narrow black ring bearing the model number separates the matching rubber-covered, lightweight objective lens hood, referred to by Vortex as a 'sunshade'. It is, of course, much more than that as it offers considerable protection from the elements in inclement conditions. Sliding it out smoothly and easily, I discovered when fully extended it provides the objective lens with a seriously impressive 65-mm protective recess, which is considerably more than in many top-tier models.

Another neat inclusion in the lens hood is the recessed ring in the rubber armour, which allows the loop of the tethered lens cover to sit tightly within it so that it does not accidentally slip off or become detached in the field through snagging. Full marks to Vortex for adopting this simple design initiative, as most optics manufacturers simply offer slide-on rubber ring tethers on their binoculars and telescopes, keeping their fingers crossed they won't fall off. Unfortunately, although perhaps a minor detail, the lens cover clips soundly into the body of the scope, rather than into the hood, so doesn't stay put when the latter is extended.

At the business end of the scope, the new zoom eyepiece screws into the body and is locked by tightening a milled ring at the interface. The new design delivers an increase of up to 20% in the field of view, as well as magnifications of 16-48x on the 65-mm model and 20-60x on the 85 mm. I found the zoom operates smoothly, rotating easily via a grippy milled rubber ring.

The eyecup, with its squared-off soft rubber covering, twists out to click-lock in three positions above the base setting. Like the objective lens hood, the latter also neatly incorporates its own recessed ring to prevent accidental detachment and loss of the tethered lens cover.

The visible field of view is dependent on a combination of eyecup extension and magnification. This may vary between users, but to give examples of extremes, I was able to see the full field at the lowest magnification, irrespective of eyecup positioning, but could only see the complete field at the highest magnification setting when the eyecup was in either position one or fully retracted.

The image remains sharp and bright across the full magnification range, extending almost to the very edges of the field of view, where there was some detectable curvature of field. I was pleased to see an accurate portrayal of natural colours, from pale straw through to the darkest conifer-green, against an overall 'warm' colour rendition.

There was, however, a notable degree of chromatic aberration. This was particularly evident when viewing dark birds, such as Eurasian Coots, against a brightly lit aquatic background, although it was far less obvious across darker backgrounds or in situations where the background setting comprised a range of colours and textures, such as woodland.

At £449, the new 65 mm Diamondback would appear to represent a good-value first telescope for birders looking for that extra reach beyond binoculars but the caveat 'try before you buy' applies, as ever when purchasing new optics.

The scope is supplied with a neoprene stay-on case, as well as the protective rubber lens covers.