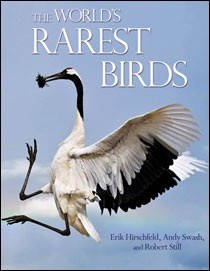 There is no sweetness in the irony that the rarest birds — those we often covet most and as birders often invest so much in seeking — are those that we have, in many instances, pushed to the edge of extinction and are in danger of losing. The list at the heart of this 360-page volume is the one list we should be ashamed of having to keep. While some of the species captured and published here for the first time, perhaps for a final time, are island endemics that may have always held a precarious grip on their existence, far too many of the 640 Endangered or Critically Endangered species included are simply rare because of our actions.

If you care about birds, this is a sobering book. It's hard not to be troubled by some of the superb images that reveal the exceptional beauty of many of these 'most rare' when they are set alongside species accounts that make uncomfortable reading due to the plain honesty of their delivery. There is an almost repetitive rhythm to the causes that contribute to the catastrophic position many of these species currently hold — "deforestation, degradation, disturbance...deforestation, degradation, disturbance" — a mantra that ensures this book is truly a viewing pleasure dipped in guilt.

The World's Rarest Birds is the result of harnessing the incredible upsurge in digital photography and the subsequent availability of photographs as a result, via an international photographic competition. The winning images, along with over 800 others, provide the visual feast on offer. However, there is much more to The World's Rarest Birds than the images, not least that the current status of c.650 of the world's most threatened species is brought together in one volume, each with an estimate of the population size and an indication of the threats they face.

Following an introduction, with sections on diversity and distribution as well as endemic and important bird areas, are pages covering the IUCN/Birdlife Species Category Assignment process and extinction/possible extinction. The next 22 pages are devoted to a 14-category assessment of the threats faced by birdlife: these range from agriculture, hunting through fishing and climate change to geological events, each summarised globally with examples of species particularly affected by that particular threat. These sections pull no punches; they don't step back from attributing responsibility for the position that the species featured find themselves in, with the threats laid out with measured simplicity. The layout of these sections allows for some larger images than the individual species accounts and many of the book's most eye-catching are here, from the stunning Hyacinth Macaws via the striking Belding's Yellowthroat of Baja California, to the solid features of the White-rumped Vulture.

The main species accounts are ordered in six 'Regional Directories', each prefaced with an introduction to the conservation challenges in that particular region. Within each region are short sections providing a synopsis of a particular 'hotspot', introducing some of the key species, the conservation challenges and recent history. While in the main these make pretty depressing reading, there are still seeds of optimism hidden away in conservation successes such as the Ouvea Parakeet, whose population has increased threefold since the early 90s, and the community nest-warden scheme in the Central Panay Mountains that may have halted and reversed the decline of Walden's (Rufous-headed) Hornbill.

The concise species accounts follow a formula: each is headed by references to threat codes, and a population estimate is followed by a few sentences on the distribution and habitat of the species and a brief assessment of any conservation action, as well as occasional brief comments on behaviour and ecology for some species. One particularly innovative feature is the inclusion of QR (Quick Response) codes for each species. These codes can be scanned via a free app available for smartphones and tablets: scanning a QR Code automatically opens the species factsheet on Birdlife International's website providing more detailed information on the species. These factsheets are updated annually and include high-resolution distribution maps. A simple deployment of technology but one that ensures that the latest information is available at your fingertips as you can grab a picture of the QR code to store in a photo library and access the information via the stored code at any time.

The final section details 60 'Data Deficient Species' of which little is known about population, current threats or in many cases whether they continue to exist at all. Hopefully the woeful lack of information on some of these enigmatic species will inspire some of the new generation of birders to rise to the challenge of discovering more. While twitching Baer's Pochard may be feted in some quarters, the recent rediscovery of Sillem's Mountain Finch after an 80-year absence of records is a far greater and more inspirational narrative.

This is a coffee-table volume that scrapes the glossy veneer from rarity, places a marker firmly in the ground in a measured manner and unflinchingly highlights the endangered and vulnerable along with the challenges that face us to make them less so. If it succeeds in raising awareness for even some of the species it highlights it will be a major achievement. Buy a copy and give it to your MP or MEP with a personal message to do more; it's the least we can do.

Thanks to Princeton University Press for providing a review copy of The World's Rarest Birds; this copy has been donated to the library of my local high school in the hope it inspires some of those that pass through.