The Sibley eGuide to the Birds of North America app

The North American Bird Guide by David Sibley (known as just ‘Sibley’ in the vernacular) was a revolutionary revision of the standard field guide, being largely based on illustrations with very little text. An acquired taste, those who like it swear by it, though others find the illustrations a little too bright and rendered with artistic licence.

I am a fan, but the original softback has always been rather sizeable for use on the hoof and I looked forward to trying out the app in the field on a visit to New York at the tail end of the migration period.

The most recent version of the app (v1.8) is 447 MB in size (taking about 40 minutes to download via wi-fi, depending on your connection speed). It contains the whole text and illustrations from the book (some 6,600 paintings and about 800 range maps), plus vocalisations (about 2,400 individual samples of 700 species). It is these last that are the real clincher for mobile users. Multiple calls and songs are included for virtually all species, often from several recording locations, and therefore provides regional variations of each. New discoveries, like the currently mooted King and Clapper Rail splits, weren’t confirmed previously, but much of the continental variation is included.

The real virtue of this app is its simplicity. On opening, the user is presented with a choice of indexes: Taxonomic, Alphabetic and Smart Search. You can also choose to update your current list from this home page, and set location and language. There is also the usual introduction, bird topography and usage tips.

Once you have found the species you are looking for (and this won’t take long), you will be able to scroll through colour illustrations of each in all plumages and the major regional variations, while reading the basic information on the species. There are icons to the top right for selecting range maps or sounds. A real advantage is that you can keep the bird sounds looping while looking at the illustrations. I didn’t use the sounds for field playback – merely for quiet field reference – as I visited in the breeding season, but there will be a clear advantage for birders to have such an astounding sound library come the autumn migration period.

Like the book, the app is due a revision soon, and we understand that David Sibley has been working flat out to ensure that this will be next year (2015). The downside at present is that current users won’t be able to get an upgrade as things stand. The author is trying to change this so there may yet be good news for purchasers new and old. 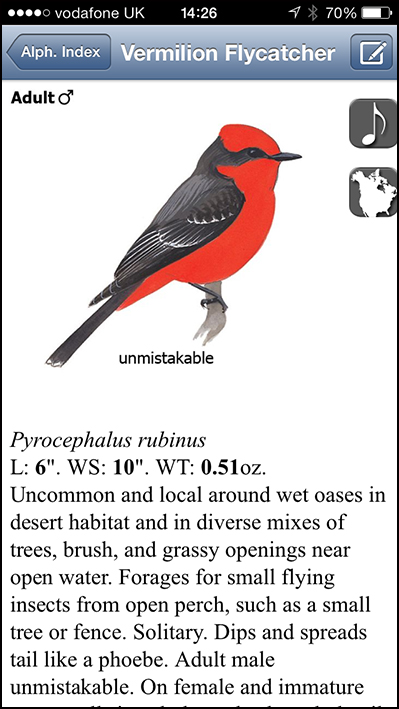