The Helm Guide to Bird Identification 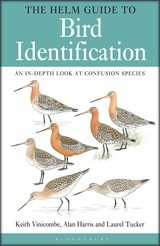 I think it's fair to say that Keith Vinicombe, Alan Harris and Laurel Tucker's Field Guide to Bird Identification, first published by Macmillan back in 1989, is a classic. Tackling a wide range of confusion species, it acted as an important reference to birders of all calibres. But, as is the case in many walks of life, time leads to progression. Over the past 24 years there have been huge advances in the field of bird identification, and Vinicombe et al.'s guide was in need of an update.

That moment has come: improved, bulked out, refreshed and subsequently reprinted, the classic has returned in its 2014 incarnation as The Helm Guide to Bird Identification. Many will remember the original Macmillan edition and concede that it looks somewhat dated, now that we're well into the 2010s. Helm has, therefore, given it a typically professional makeover. It's presented in classic Helm format (see right): modern, fresh, easy to navigate around and undeniably better presented.

As you flick through the contents, you'll notice the vast improvement in the quality of the print: the reproduction of Alan Harris' excellent artwork in the new edition gives it new life — take the white-winged gulls, for example. And, while the associated handwritten notes possessed a certain charm, there is no denying the typeface used in the Helm version is clearer and altogether more professional-looking.

One thing obvious to anyone who holds the two side by side is the greater bulk of the newer version: it's taller, wider and thicker, with the original's 224 pages upped to almost 400 this time round. Not quite as portable, then, but this isn't really a book to take out in the field — it's much more a handy reference that will fit in perfectly on a bookshelf no doubt already furnished with various other Helm field guides. This increase in bulk naturally reflects the advances of bird identification over the past two decades, with new identification complexes coming to light and greater detail applied to problems old and new.

Take, for example, the inclusion of Caspian and Yellow-legged Gulls, very much a 21st-century identification dilemma that led to an explosion in birders' interests in all things Larus. The gull illustrations on pages 220–221 and 223–224 were actually among my favourites in the whole book: the Caspian Gull illustrations are among the most complete in a non-specific European guide (i.e. excluding Olsen and Larsson's Gulls of Europe, Asia and North America) — they're an improvement on the Collins Bird Guide (2nd edition), for instance. Other examples include the 'red-tailed shrike' complex discussed and illustrated at considerably greater length, as well as various warbler splits ('Bonelli's Warbler' becomes Eastern and Western, 'subalpine warblers' include text on Moltoni's and so on).

Is it worth buying? Yes, definitely. This, as the book says, is "suitable for birders of all levels". While it might not be quite on the level of intricacy of van Duivendijk's Advanced Bird ID Guide (which is primarily aimed at the more experienced end of the market, and also lacks illustrations), it's not intended to be — the great advantage of this publication is that it offers illustrations, which makes it much more accessible. For beginner and intermediate-level birders, there's plenty of information to soak up; plenty to learn about. And for those more seasoned among us, it'll act as an extremely useful identification reference on many of the more pressing quandaries relevant to British (and European) birders in contemporary times.

The Helm Guide to Bird Identification will retail for £25, but is available to pre-order at the Birdwatch Bookshop for a reduced price of £23 (£22 for magazine subscribers). To take advantage of this offer, click on the Birdwatch banner below.