The Bird Songs of Europe, North Africa and the Middle East app 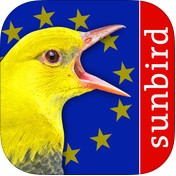 Back in 2003, the most comprehensive set of sound recordings available for Western Palearctic birds was published by German company Musikverlag Edition Ample. Featuring 2,817 recordings of 819 species over 19 hours and 20 minutes of running time on 17 CDs, it dwarfed all predecessors in both scope and content. Fast forward 11 years and that collection has been reborn as an app. It's essentially the same species and tracks as before, but with all the packaging and multiple optical media replaced by a single 1.42 GB download.

The completeness of the CD edition and the two-disc MP3 version that followed attracted many admirers, but also some criticism, including disagreements over the identification of some species' vocalisations. The publisher tells me that identification errors in the original products have been eliminated in the app, and it would be reasonable to assume that such changes are reflected in the marginally reduced coverage of 810 species, though the number of recordings has actually increased to 2,850.

Launch the app and you'll see an attractive grid of photos illustrating key bird families/groups in the region. This initial default start screen can be switched to an A-Z species directory or a listing of families in taxonomic order; both options load a species view on the right-hand side of the screen which features an animated spectrogram and track information.

Under the species view, there are options for similar species, a description of the bird in question, its Wikipedia entry, and the facility to create a sightings list. The similar species filter may be helpful to beginners but it can be a little arbitrary (for example Eyebrowed Thrush is one of the 'similar' options for Song Thrush), while the description text is informative to a degree but appears translated into English from German, and is in need of editing.

The Wikipedia feature is of no extra value as it doesn't work offline — effectively, it's a link which requires an internet connection. The facility for users to create their own lists is again, in my opinion, of limited benefit — there are easier and more intuitive ways of doing this digitally. Oddly, switching between these functions was occasionally sluggish, andI found that the app could be slow to respond to tapping on my device.

The real value of this product, as its name suggests, is as an audio resource, and it's useful to have so many Western Palearctic bird sounds brought together in a single app. The addition of spectrograms in this format really helps visualise vocalisations, and I like the fact that it is possible to play 'subtracks' directly (rather than by old-school fast-forwarding) with the simple tap of a finger.

On the downside, track information is scant on detail — one of the criticisms levelled at the original CD set — and date, location and recordist data are missing. This may not seem too important, but in some cases it's unclear whether calls relate to breeding birds, migrants or those on their wintering grounds, or even adults and juveniles.

This is particularly an issue for taxonomically 'complicated' species for which vocalisations can be significant. For example, there are just two tracks (each with two subtracks) of Yellow Wagtail, for 'song of male' and 'calls', with no clue as to which of the 10 or so potential subspecies from across the region is involved. The same is true for the vocally complex Common Crossbill, while large grey shrikes — potentially three or more species — are represented by a catch-all Great Grey Shrike, with six location-less songs, one subtrack of calls and another of fledgling calls.

It's a shame that perfecting the all-important audio element of this app wasn't a higher priority than the extra functionality, which must have involved considerable development time and money. The result is a product that would benefit from further improvements, yet still costs £54.99 — it's very expensive for an app. There are cheaper or even free alternatives (admittedly less fully featured) like Aves Vox, as well as stiff competition from the Collins Bird Guide app, which has just launched and is priced much lower.

This app will, however, benefit from free updates in future, including the intended addition of calls from the same publisher's Bird Sounds in Flight MP3 disc, which features 850 recordings of 350 European species. Such major enhancements at no further cost are sure to increase its appeal.