Keeping its powder dry for the past few years, Swarovski has at last unveiled its new baby, which has been in the development pipeline for some considerable time. Following substantial, in-depth market assessment, part of the philosophy behind it is linked to promoting ecotourism, allowing travellers to maintain a high level of quality viewing without the need to transport and carry heavy optics and tripods around when birding overseas.

So, enter the Swarovski ATC – the initials resulting quite simply from 'Angled Telescope Compact'. Unlike the well-established ATX/ATS range of telescopes, this new scope is not modular as its small size alone negates the need for separate components. Its design is, however, derived from the aforementioned range and features, effectively, the same eyepiece from that series, neatly integrated within the short, slim, almost disproportionately small body. Retaining this same-sized ocular quite simply means that the image produced will be of a higher quality than it would have been had the ocular been made smaller.

The objective lens has been fixed at 56 mm, which matches the brand's largest binocular and is set at this value to ensure that magnification is not compromised, allowing the delivery of a magnification range of 17x-40x, while the focusing system employs the same, integrated helical body ring as the larger telescopes in the series. 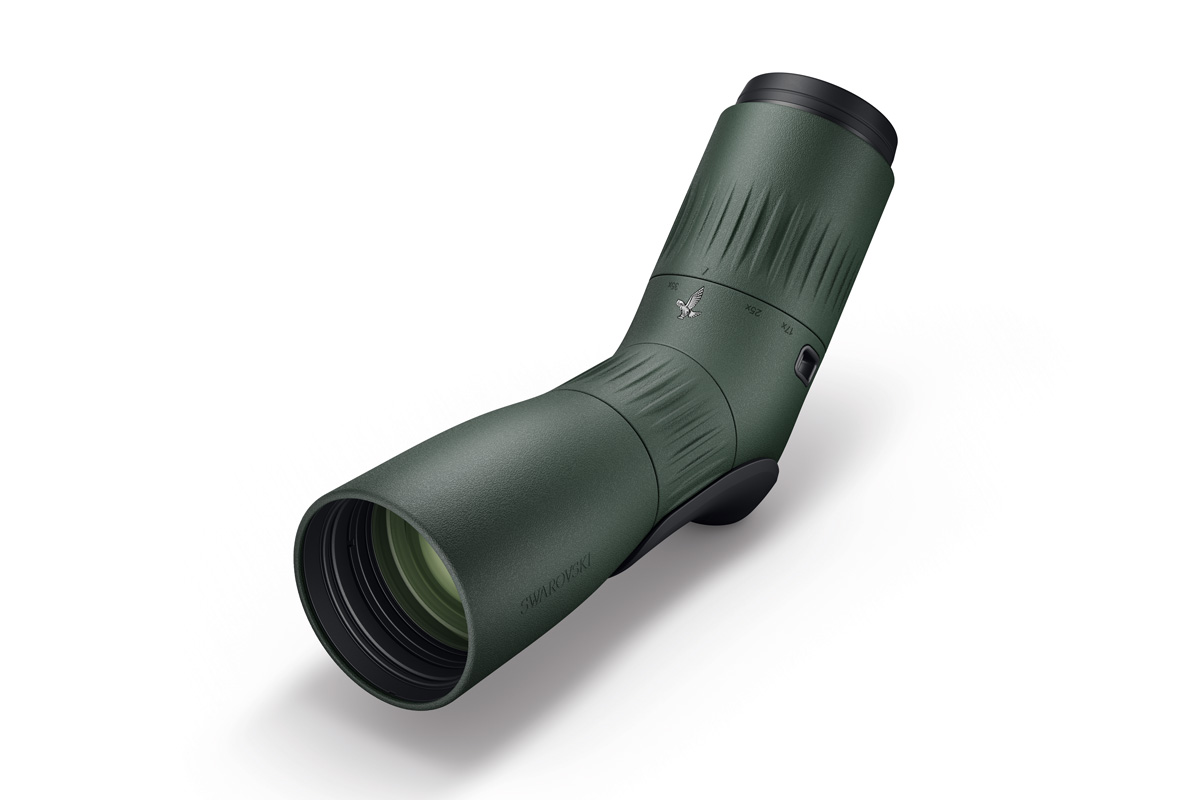 Weighing in at less than a kilo, it would appear that this new scope has just about everything going for it in the niche it was designed to fit into and my eagerness to put it to the test was fulfilled in South America during late August. What better environment could there possibly be than the mountains and valleys of the Colombian massif and the jungle trails of the Amazon basin, for a group of birding journalists with a keen interest in optics to test this promising-looking product?

As visitors to the South American continent will already know, the variety of birds is vast to the point of being overwhelming, so starting off at La Cocha lake, some 2,700 m above sea level in the Andean massif, provided plenty of scope for some, not too taxing, testing on small numbers of waterbirds out in the open, including Andean Duck, Bare-faced Ibis, Slate-coloured Coot and Andean Gull.

The first practical aspect that becomes evident when using the ATC is there is no objective lens hood – a design decision made by Swarovski to reduce size, weight and complexity. There is, however, a 27-mm-deep recess for the objective, which serves to offer some shade and protection from rain, depending on prevailing conditions. An objective lens cover clips neatly inside this and can be both fitted and removed very quickly.

Further protection is available for the ocular in the shape of a solid lens cap, which can be attached by a cord to one of two recessed metal rods on either side of the prism housing. The same two rods also act as attachment points for a shoulder strap if the user chooses to hand-hold the scope or rest it on a solid object or against a tree or post, as opposed to using it with a tripod.

There are no plans to manufacture and supply an external, slip-on case, either – another aspect of the 'keep it simple' strategy. But if my reckless behaviour is anything to go by, the ATC's tough rubber body armour served to provide more than adequate protection on each of the three occasions I sent my tripod-mounted sample scope crashing to the ground – including on a road and a concrete floor. It remained undamaged! 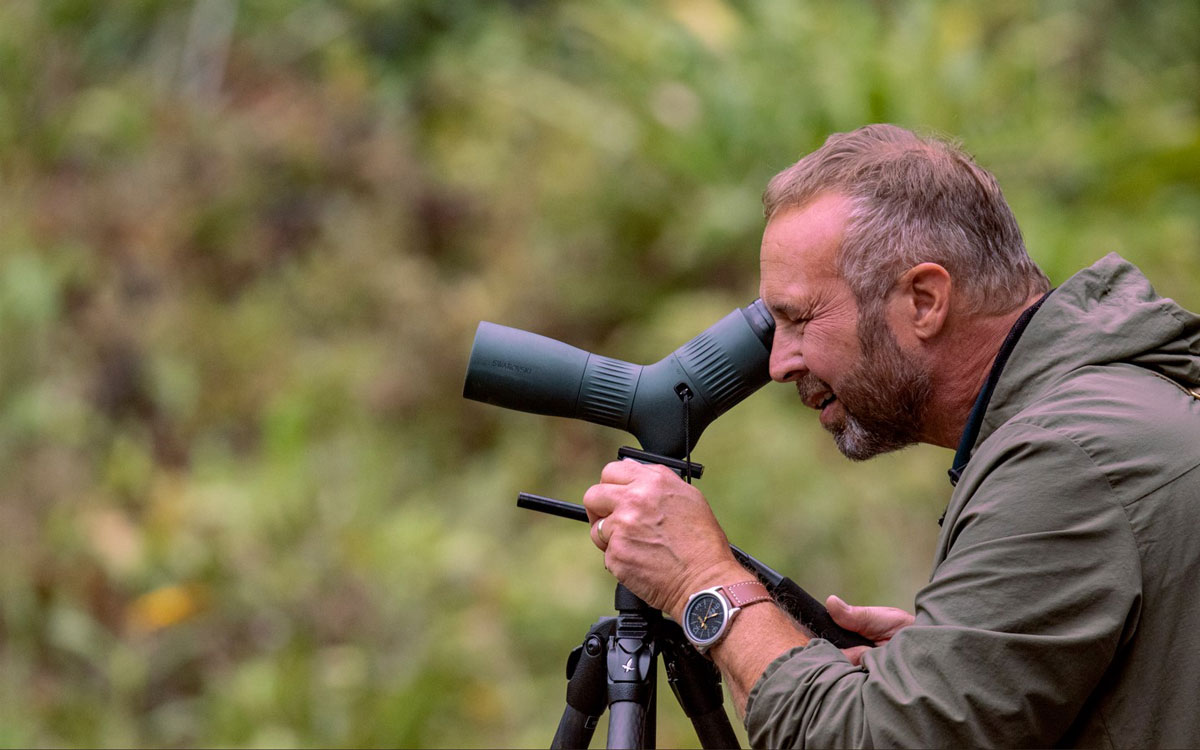 The ATC mounts to a tripod via a threaded connection port on the base of the prism housing.

As any potential user would expect, this neat scope is very easy to use and simple to operate. The built-in zoom turns swiftly and relatively smoothly through approximately 120°, clockwise, from 17x to 40x, with a subtly raised pointer indicating the value of the magnification reached on the adjacent part of the body. Regardless of the magnification setting, the manufacturer's close focus distance of 3.4 m holds good.

Further numerical analysis reveals that approximately 2.6 clockwise rotations of the broadly-ribbed focusing wheel take the image from close focus to infinity, with one turn toward the end of this range swiftly moving the focused image from 10 m to 'long distance'.

And the image itself? Well, unsurprisingly, it meets the high level of quality the birding world has come to expect from the company that many now regard as front-runners in the optics industry. With the integration of field-flattener lenses, I found the ATC provided a consistently sharp image across the whole field of view and it did not disappoint in the brightness department, either. Colours, too, were true to life and most importantly, focusing was easy to achieve, the mechanism behind it not coming across as being too sensitive.

Set against a generally cold to neutral colour rendition, the level of chromatic aberration varied from negligible in the centre of the image to tolerably low toward the edges of the field, although throughout the period of use it was generally unnoticeable.

Aside from the birds already mentioned, the ATC delivered mouth-watering views of some of Colombia's finest birds, including Scarlet Ibis, Chestnut-bellied Cotinga, Ferruginous Pygmy Owl, a host of mountain tanagers and many of the colourful cloud forest birds associated with this region.

For those practicing digiscoping, the ATC is compatible with mobile phone adapters, which fit around the twist-out ocular collar. There are no plans to produce a compatible camera adapter as any standard DSLR would tip the balance on this small scope, although the more enterprising digiscopers can easily make their own if they are considering using a compact digital camera. I did and I was more than happy with the results.

And while we're on the subject of balance, the pivotal point of the ATC is to be found at the base of the prism housing, which is where a threaded tripod connection port is integrated. There was a conscious decision made to avoid including a conventional tripod foot but in so doing there is no hole to accommodate an anti-rotation pin from a standard quick release plate and the scope can, and did, work loose on occasions.

If the scope is not to be used with a tripod, there is the option to attach a 'half shell' (supplied with the scope) to the tripod connection port – a neat idea which enables the scope to be rested on a wall, bean bag or car window without the point of contact interfering with the operation of the focussing wheel.

The ATC will be available in green and burnt orange, with a straight version, the STC, in green only.

In summary, it would appear the ATC has a bright future ahead of it and it is expected to be in high demand. It goes on sale on 3 October [2022]. 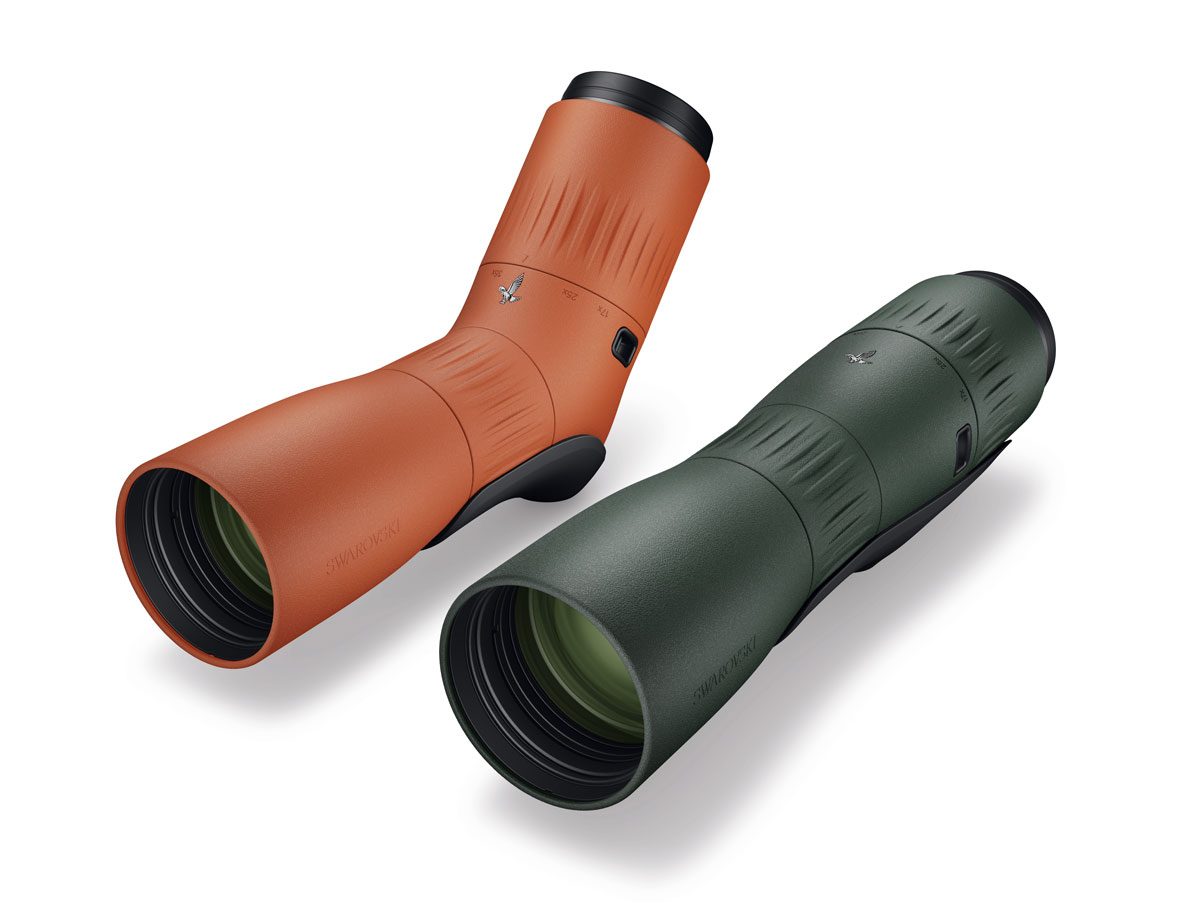