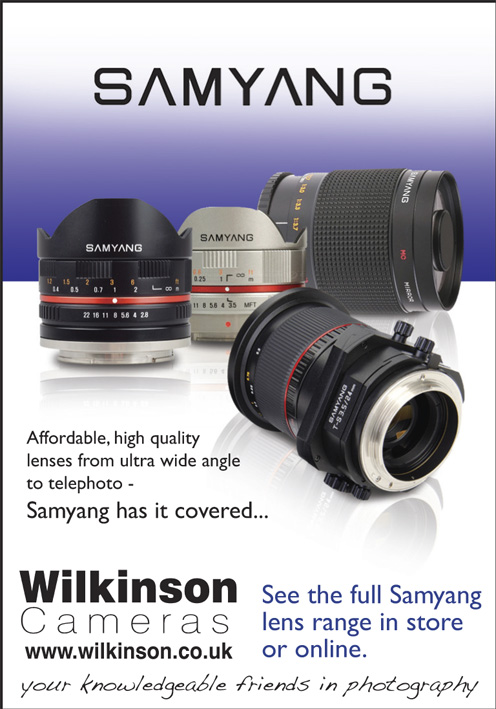 Click on the image above for more information
and to purchase Samyang lenses.

Picking up one of these lenses certainly brought the memories flooding back: Titchwell, Norfolk, May 1984, and a pink Ross’s Gull flying over the marsh as I desperately tried to focus my 500-mm mirror lens on the bird as it dipped down to the water. Those black-and-white photos still grace the pages of my diary of the time, and I can still remember how difficult a lens it was to use. I had no idea how I would manage with a mirror lens again after years of super-fast AF lenses, but there was only one way to find out.

One of the advantages of a mirror lens is its small size compared to a telephoto version of the same focal length. This one is a fraction of the size of my own 500 mm, even smaller in length than my 300 mm f4; it is also lightweight, making it easy to carry in a large pocket. But the main attraction of both Samyang models is the price: the 500 mm sells for £199.99 and the 800 mm costs £299.99. Could they be any good at such a low price?

As the name suggests, these lenses have a number of mirrors inside that reflect the light gathered by the lens, instead of the longer straight route taken through a telephoto lens, and this allows for the compact and lightweight design. Both models are exactly the same design; the 800 mm is simply larger.

Front and rear lens caps and a carrying case complete a nice-looking package. A lens hood would have been useful, if for nothing else than to protect the front element from accidental knocks. Mounting the lens is via a T-mount, sold separately.

So, what was it like to use a mirror lens again? I started with the 500 mm as this will probably be the most popular choice for anyone considering buying. The main problem with a mirror lens is that because it is so light you think it will be easy to hand-hold, but it isn’t. Manually focusing and keeping a lens with this magnification steady is not easy, even using a fast shutter speed on a sunny day.

Focusing is so precise with this type of lens that a light turn of the ring takes you to infinity and back, so you have to be extremely careful. I did take some sharp-looking images hand-holding, but I think they would have all been improved by using a tripod.

Sharper shots were taken from inside a hide at my local reserve using a beanbag to rest the lens on. This also made focusing easier as I wasn’t worried about camera shake and could concentrate on my subject. And I have to confess that I really did have to concentrate on the focusing side of things; gone are the days when it was second nature to follow a bird while turning the focusing wheel and pressing the shutter. I would press the shutter and wait for the focus to lock while the bird kept moving, but I did get back into the swing of things after a few sessions.

Looking at the results later I was pleasantly surprised at the sharpness, contrast and colour, considering it was a £199.99 lens. The quality of some Turnstone images was good and a 6x4-inch print made from one was particularly pleasing.

The 'doughnut' effect caused by the light hitting the mirrors and reflecting background shapes was apparent on a couple of shots, depending on the type of background. A plain sky is no problem, but even something that wasn’t obvious at the time, such as rabbit droppings, showed up as circles on the finished image. It is possible to remove these using the Clone tool in Photoshop, but it is a lot of work; I don’t find them that much of a distraction, but some people do.

Next came the 800-mm version, and this was far more difficult to use. All the problems mentioned with the 500-mm lens were even more obvious with the extra magnification. I found it impossible to take a sharp hand-held shot due to camera shake and had to use a beanbag or tripod most of the time. For the extra £100 I’m not convinced that this is a better option, but some may be attracted to the added power of the lens.

At the fixed f6.3 aperture the 500-mm image does appear a little dark when looking through the viewfinder, but I didn’t find that too much of a problem. With the f8 aperture of the 800 mm, I did notice it was more difficult to focus accurately. But digital does allow hundreds of images to be taken without extra cost so at least the expense of wasted film isn’t an issue. I’d recommend using at least ISO 400 so that a fast shutter speed can be used to ease problems of camera shake.

Overall I was impressed with the quality of the 500-mm lens for just under £200. It is difficult to compare the images I took 25 years ago on grainy film to those of today viewed at 100 per cent on screen, and I’m pretty sure the old negatives wouldn’t stand up to that same close scrutiny. If your budget will stretch to £700 there are probably better options, but in these credit-crunch times when every pound counts, for someone wanting an entry-level lens to bird photography, Samyang's 500 mm F6.3 option could be a good choice.