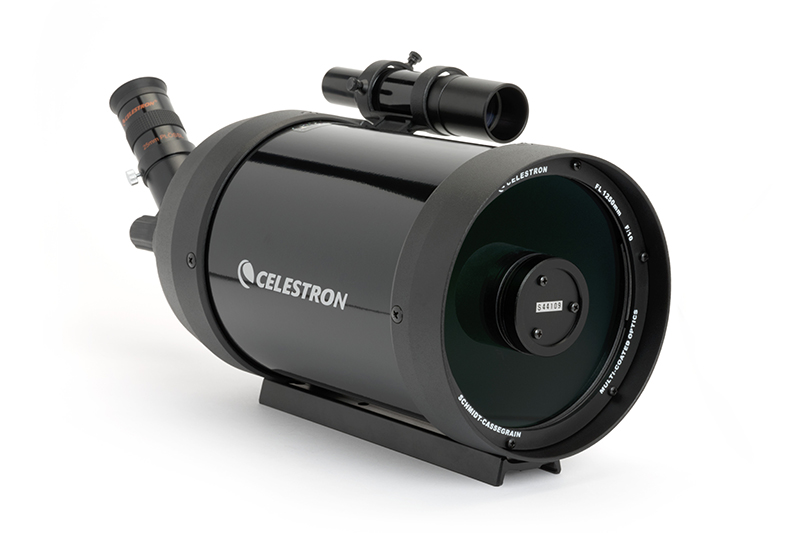 When it comes to choosing and using optics, most of us would be loath to turn the clock back to what might be considered ‘old technology’. But I spent much of September using a telescope that was first launched in 1971 and which has changed little since. In a departure from current birding convention, I put Celestron’s C5 spotting scope to the test alongside some top-tier gear and I was pleasantly surprised with the results.

In today’s optics market, this piece of kit – and others of its ilk – would be overlooked by birders due to its large proportions, heavy weight and it not being waterproof. Game over, then? Not so fast! The fact that its optical excellence is the reason it was chosen by NASA for many space shuttle missions clearly says something about it.

Despite its apparent bulk, the C5 is actually shorter in length than many 65 mm scopes and its large, 127 mm diameter objective is designed to substantially increase light-gathering capacity above and beyond the contemporary spotting scopes in common usage for birding. Technically, it is a Schmidt-Cassegrain telescope, a model that uses a combination of mirrors and lenses, incorporating a Cassegrain reflector’s optical path with a Schmidt corrector plate to make an uncomplicated and relatively compact instrument. In essence, its simplicity is the key to its success.

Celestron’s premium coating technology ‘StarBright XLT’ employs multi-layer mirror coatings and multiple layers of magnesium and hafnium fluoride on the corrector plate. The current C5 uses a better, more transmissive glass for the corrector than has been used in earlier models.

Offering 4.5 times more light-gathering capacity than a 60 mm telescope and 2.5 times more than an 80 mm model, the C5’s large objective allows it to outperform smaller spotting scopes. It is compatible with Celestron’s range of Astro scope eyepieces. I used it with two of these, offering fixed magnifications of 50x and 178x.

Attempting to locate a bird with a fixed high-magnification eyepiece is not always easy, especially if it’s at fairly close range. In this respect I found the small, 6x30 ‘Finderscope’, which slots into a bracket mounted at 45º off the top centre of the chassis, very useful for initial subject location. There is little eye relief with this guiding aid so it takes some getting used to, although its attachment and subsequent use is optional.

Attaching an eyepiece is simple. There is a 45º erecting prism that simply slots into the ‘visual back’ of the scope and is secured in place by twisting a screw between thumb and forefinger. The prism serves to correct and present an otherwise back-to-front and upside-down image to the eyepiece, which also slots in and is similarly held in place. This set-up allows different eyepieces to be interchanged in a matter of a few seconds. Like the Finderscope, the eyepieces offer only short eye relief and for wearers of spectacles they are perfect in this respect.

Focusing is simple and easily performed by turning a large, broadly milled, rubber-covered wheel offset to the right of the eyepiece. It reminded me of tuning in an old-fashioned radio and it allows close focusing down to 6.1 m. It requires multiple turns to focus accurately at this short range, but for long-range viewing this is not the case and it’s easy to obtain a sharp image with little turning, with the added advantage of it being not too sensitive.

Earlier in this review I confessed to being pleasantly surprised with the scope’s performance. I have to say the image quality substantially exceeded my expectations. It’s sharp – except at the very periphery – relatively bright and the colours are accurate, although I felt a little more contrast wouldn’t have gone amiss. In my side-by-side comparison with a top of the range scope, at the same magnification, the resolution was as good, with both delivering the clear, crisp plumage detail of a juvenile Lesser Black-backed Gull I was watching at several hundred metres’ range.

There is some field curvature evident when panning, but I didn’t find this a problem; however, the field of view offered with the 50x magnification eyepiece is at the lower end of the range offered by many other scopes on the market. One big plus is the negligible amount of chromatic aberration evident in the image, which appears to be considerably less than that found in many conventional birding telescopes.

Using the C5 with Celestron’s Luminos 7 mm eyepiece pumped up the magnification to a whopping 178x, with surprisingly little loss in light. The only drawback with using this eyepiece was the extreme difficulty in obtaining a sharp image. I was still able to see detail on distant birds, but the hoped-for crispness was distinctly lacking. An equivalent eyepiece offering around 100x magnification would probably be more suitable.

The C5’s limitations may be its weight and the necessity to use a sturdy tripod for support, as well it not being waterproof. There is no stay-on case to offer any form of protection. However, the C5 is designed to be fully camera adaptable, and by using an optional T-Adapter and T-Ring for a 35 mm DSLR camera with a high magnification eyepiece it offers the potential for long-distance digiscoping.

It comes with a water-resistant, soft-sided carry case for transporting the component elements. To my mind, this scope represents good value when used in the right environments, especially as it can be found well below £500 through some judicious shopping around.