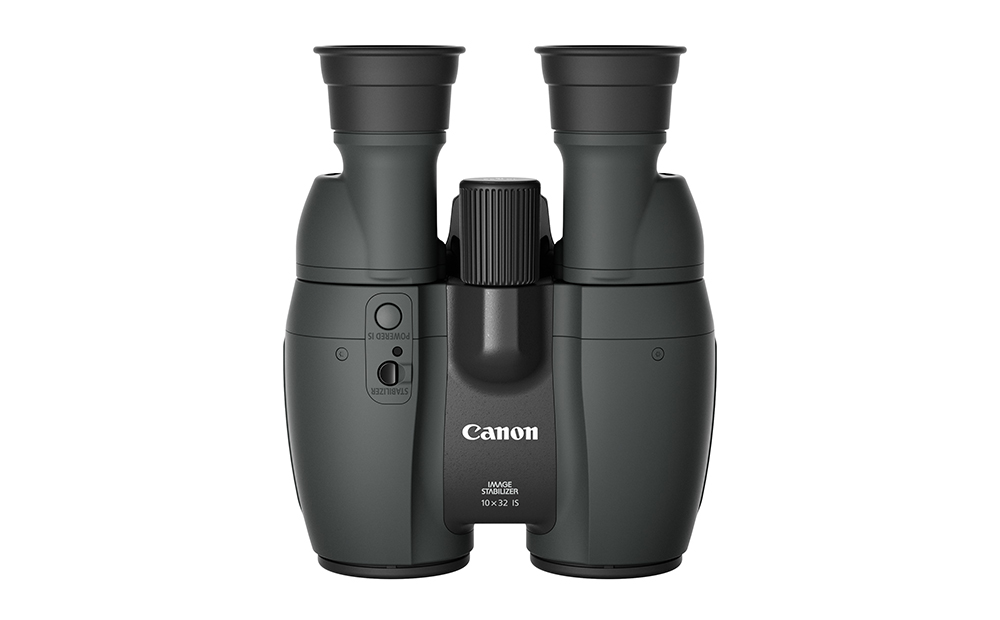 It was only two years ago that I reviewed Canon’s image-stabilisation binoculars (Birdwatch 282: 58-59). However, there have been some significant enhancements to the range since then.

With a higher level of operational quality than the previous models, including a system to preserve battery life, the 10x32 IS III takes stabilised image observation to the next level. The body has been completely redesigned – so much so that its predecessor, the 10x30 IS II, appears positively archaic. As well as being far more aesthetically appealing, the functionality and ergonomics have been ramped up, too.

These enhancements come at the expense of a larger body size and increased weight, although the chassis now houses objectives that are 2 mm larger in diameter, thus increasing the light-gathering capacity of the binocular. The body also holds the image-stabilisation system, which includes sensors and a power source, and there is no central hinge as a result. The battery compartment is underneath the body, its cover clipping in firmly and internally tethered so it doesn’t fall off and get lost.

The higher metrics, although outside the general range of 30-32 mm binoculars, are still in line with many standard 10x42 models on the market.

The stabilisation system is known as the Vari-Angle Prism type. Two sensors detect horizontal and vertical shaking respectively. The two Vari-Angle Prisms in both the left and right sides of the binocular are controlled by a microprocessor to instantly adjust the refraction angle of the incoming light. The response is immediate, and the image remains stable even when panning.

I found the new model easier to use than its predecessor. The body is covered with a rubberised coating making it rain resistant, but it still lacks the ‘waterproof’ or ‘all weather’ attributes of the larger models within the range.

Four ribs run along each of its sides to increase grip at the point of contact with your palms, while the fingertips sit neatly towards the top centre of the body, allowing the thumbs to rest in the smoothly contoured bases of the oculars. Because there is no central hinge, the latter are mounted on a synchronised swivel system, which means that they can be rotated in or out to allow the adjustment of interpupillary distance to achieve the most comfortable viewing position for your eyes.

The eyecups are rubberised and fold down for spectacle-wearers. The dioptre adjustment is located beneath the right ocular. It does not lock.

The improved ergonomics increase the comfort factor. Perfectly positioned, integrated strap lugs sit opposite the top end of a newly designed, much deeper (34 mm) focus wheel. This turns very smoothly, with approximately 2.25 clockwise revolutions between the closest-focus distance to infinity.

Another improvement is in the close-focus distance itself, which is now 2 m. The previous model was 4.2 m.

But the raison d’être for this binocular lies in its image-stabilising functionality. Instead of operating this through one, centrally located button, there are now two buttons positioned on the right side of the body. One operates general image stabilisation for panning and long-distance viewing in which the image is constantly changing, while the other, the ‘Powered IS’, is said to be more effective when targeting one point for longer periods. I found both to be effective in either circumstance.

A major difference between this and the previous model lies in the fact that it is no longer necessary to continually hold down the buttons to remain in stabilisation mode. A simple quick press and release of either switches on stabilisation for five minutes, after which it automatically turns off. A second press switches off the system if five minutes’ viewing time is not required; in order to conserve power, the automatic turn off kicks in after 10 seconds if the binocular is hanging down. You can remain in stabilisation mode by holding down either button. A green light shows whenever the IS system is operating.

This binocular would be perfect for use on a pelagic trip, with a vessel in constant motion. It also works well if you need to hold the binocular with one hand – to write notes or make a phone call, for example. I can also see an application for using it to capture images using a compact camera or mobile phone.

The nearest I got to emulating a pelagic trip was using the binocular from a moving vehicle. It focused clearly and comfortably on Northern Lapwings, European Golden Plovers and Black-headed Gulls, all of which were visible with ease in fields alongside the road.

All Canon IS models will function as ‘normal’ binoculars when the power source runs out or is removed. The image quality is high, delivering a nice 3D effect, which is always more marked in porroprism binoculars than in roof-prism models.

Given the 32-mm objective combined with a 10x magnification, I was surprised at how bright the image was in poor light. The contrast is good and the colours are natural, with a very slight warmish tinge. Canon uses field-flattener lenses so there is no significant curvature of field and the image sharpness extends to the edge of the field.

On the negative side, the level of chromatic aberration in the centre of the field is a little higher than I would like. However, this is only evident in clear-cut ‘black-on-white’ scenarios, such as dark birds in flight against a cloudy but bright sky.

The 10x32 IS III is supplied with a comfortable, broad neck-strap. An articulated rainguard and a soft, padded, zip-up case complete the package. With a price of £1,300, this model is much more expensive than its predecessor, but then it’s a different piece of kit altogether!