Take a Fiat 500 Abarth, with sports suspension, along with a poorly maintained country lane – complete with potholes – and you have all the ingredients you need for testing the new Viking Scout image stabilisation binocular. This, of course, presupposes there is no readily available rough-sea pelagic trip to embark upon – but in Britain, in December? I don’t think so.

Image stabilisation is nothing new and there is already a choice of models on the market, albeit a narrow one. However, more manufacturers are now recognising 'IS' as having potential appeal to the birding community, and Viking is the first to launch a model aimed specifically at birders.

Attending regular optics events at RSPB reserves, the company had frequently been asked for a model that was small and lightweight but which also offered the comfortable shake-free viewing of an image-stabilised binocular. Having registered the demand and seen the potential, wheels were set in motion and the Scout IS was born and duly launched in December 2018. 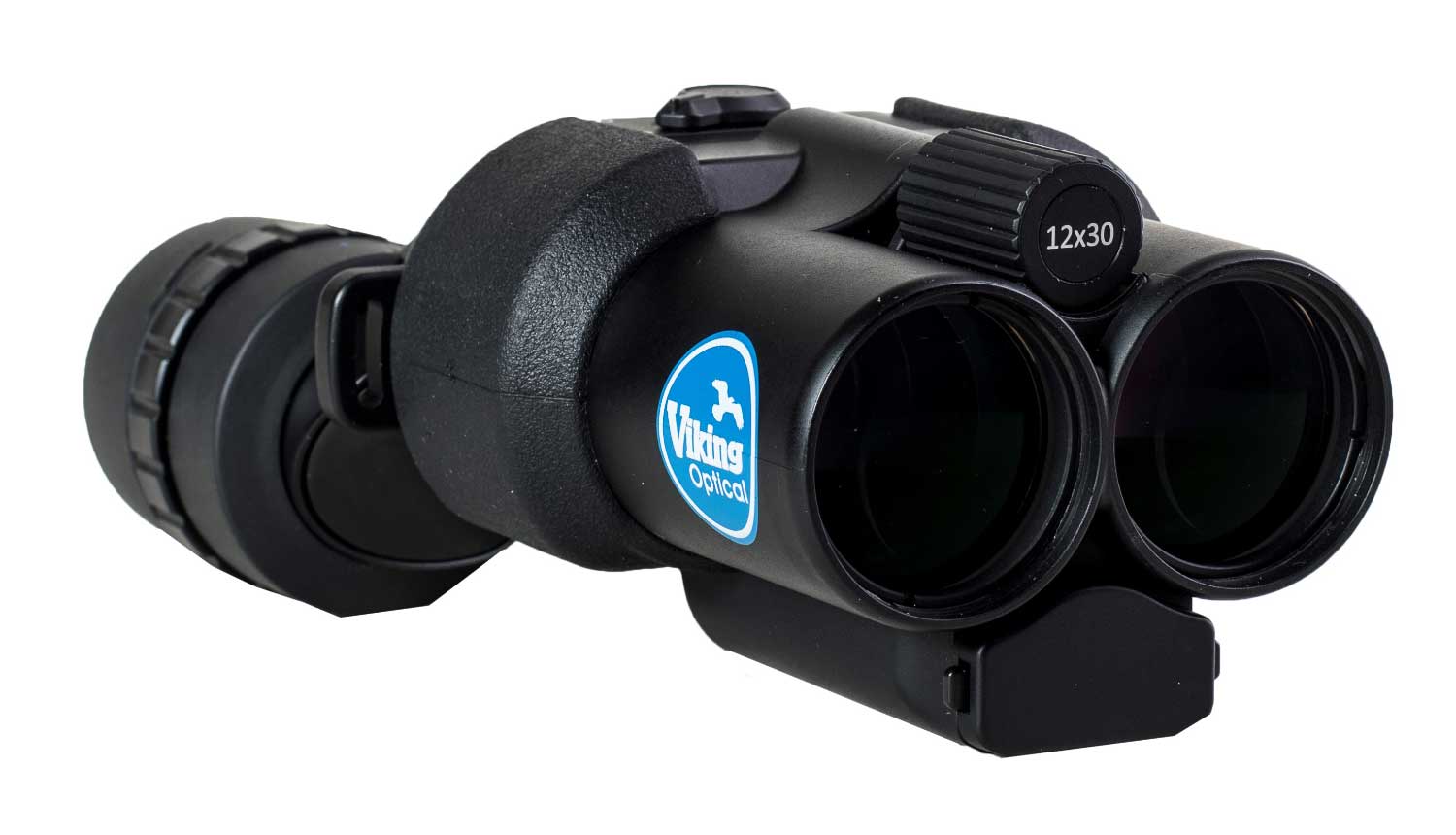 IS enables the magnification envelope to be pushed, allowing users to take advantage of a higher magnification and to use the binocular comfortably and for prolonged periods, without the shaky image. This is especially important for those who enjoy getting out birding but find it increasingly difficult to hold their optics steady. Its application on a pelagic trip, on board a moving vessel, is also widely recognised as being highly advantageous.

An initial view of the Scout may result in raised eyebrows. It certainly has a touch of the 'Star Warsian' about it, and while this is no sci-fi prop, it is unique and futuristic in its appearance. Full-sized oculars are combined with a tiny, compact, polycarbonate chassis, which houses the stabilising system and the electronics. There is no conventional hinge and the oculars operate on a synchronised swivel system, which means that they can be rotated inwardly or outwardly together to set the interpupillary distance to achieve the most comfortable viewing position for your eyes.

Other than that, the ocular design is essentially the same as that found on conventional binoculars, with comfortable rubber-covered eyecups offering three defined twist-out positions above the base setting and the non-locking dioptre mounted on the right ocular. Focusing is achieved via a narrow diameter wheel mounted above the object lenses.

The compartment housing the power source, two AAA batteries, is located centrally underneath the body, its cover clipping firmly in and being internally tethered so it doesn't fall off and get lost. It has to be said at this point that the Scout is simply 'weatherproof' and isn't currently manufactured to be fully waterproof.

As I expected, there is a big difference between looking through the Scout when the IS system is engaged compared to conventional viewing. To engage the system, simply flick the switch on the bridge to the 'ON' position and a green light illuminates just below it. The image is now stable, irrespective of any movement or vibration you care to throw at it.

Technically, an electronic movement sensor is now detecting the binocular orientation and controls direct drive motors to instantaneously provide correcting movements to the prisms, which are mounted in a dual-gimbaled frame.

There is no need to keep your finger on a button to maintain the stabilisation and to save power; the system automatically turns itself off after five minutes if the binocular is not in use. Otherwise, there is enough battery capacity to power the setup for approximately 12 hours of continuous use.

Despite the binocular being light in weight, it's surprising how much shake is evident with 12x magnification at close and medium ranges. Watching my local Red Kites almost overhead was a breeze when the system was engaged and the difference was stunning.

The image itself is surprisingly bright, even in dull conditions, despite the high magnification resulting in an exit pupil value of 2.5. In this respect, the field of view is expectedly narrow with 87 m at 1,000 m on offer, but the close focus, officially listed at 3.5 m, actually came down to 2.7 m during testing.

The image quality is fine and the Scout returns natural colours with a high level of contrast against an overall cold tone at the blue end of the spectrum and the degree of chromatic aberration is relatively low. My only criticism is that there is some peripheral distortion along with a softening of the image in approximately the outer 20 per cent of the field of view, although this does not noticeably detract from the overall viewing experience.

Enhancements to the optical system include multicoated lenses and phase-corrected prisms. The chassis design includes a non-slip, textured rubber wrap around the holding area, but the positioning of the focus wheel results in ring finger, rather than forefinger operation.

I liked the Scout and in assessing what it has to offer for the price, it appears to be an awful lot. The weight of the binocular, 420 g, is below that of the majority of conventional 30-32 mm binoculars on the market and the addition of the batteries adds little more than 20-25 g to this. It would also appear to be one of the lightest – if not the lightest – IS binocular currently available, and its compact size and somewhat bizarre shape will no doubt elicit much interest. Will it sell? Its future hangs very much in the balance.