UNTIL very recently, the ultimate goal for all producers of optical equipment was the delivery of the highest-quality image, set within cost constraints relating to research, development, materials and production processes, as well as the positioning of the product within the market. Attention to physical design often came a close second in many instances and, in some, would appear to have been given only minor consideration.

When it’s widely acknowledged that your product has likely peaked in optical performance, though, the road to further improvement narrows somewhat, inviting – if not compelling – a revisit to ergonomic design. Announcing a suite of new developments, Swarovski has done exactly this with its updated EL binocular range, including accessories, due to be launched in September.

In order to evaluate these improvements, I joined a testing team in Norway in June. The considerable variation in habitat provided the ideal setting for testing the new ELs, which included all models within the range.

As well as visible changes to the chassis, the body armour has been improved, although its outward appearance remains the same. The challenge for Swarovski was to find a covering that contained no plasticisers or softening agents. These are prone to leaking out – sometimes causing irritation – and materials containing them tend to absorb fats such as hand creams and other natural oils; this results in material degradation and loss of elasticity when exposed to heat and sunlight.

The new covering is made from a polymer which is hypoallergenic and contains no softening agents. It is up to four times more resistant to wear and abrasion, enabling it to hold its form and remain in a practically unaltered state many times longer than the material currently used.

To me, this covering presented well, felt soft and provided a more than adequate degree of grip, particularly while holding the heavier 50 mm models.

A further new feature comes in the form of a mechanical improvement. A secondary lock has been added to the dioptre adjustment on the central focusing wheel. It’s a neat system that prevents the accidental pulling out of the wheel after the single eye adjustment has been made and the wheel pushed in. It is operated by depressing the centre of the wheel and turning it through approximately 90 degrees to lock it in place. The focusing wheel cannot be pulled out again to change the setting until the above operation is reversed. I found it very quick and simple to operate – and it works. 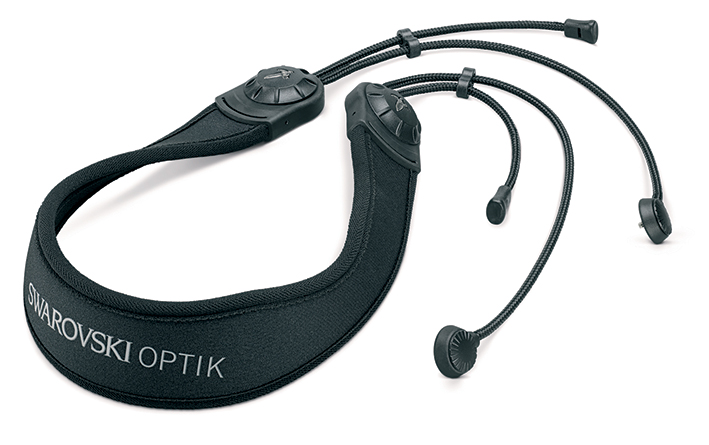 The new neckstrap is cleverly designed so as not to twist.


A considerable amount of thought has been invested in the redesign of neckstraps for the whole range, along with their method of attachment. Aside from the initial threading through strap lugs, followed by fiddling with small buckles to adjust the length, the most common source of annoyance associated with conventional flat straps is their uncanny ability to become twisted, irrespective of the number of times you untwist them.

Acknowledging this, the new design sees rounded ‘bootlace’ proximal attachment sections which feed into a smooth, durable plastic ring with a hollow centre. A push-through circular pin connects the ring to a raised circular port on the chassis by applying a little thumb pressure, followed by a turn through approximately 90 degrees to lock each end of the strap in place. This leaves the connecting ring free to rotate through 360 degrees which, combined with the rounded strap, ensures that twisting is virtually eliminated.

The rounded ‘bootlace’ also allows any attached rainguard to rotate freely around it, again eliminating another source of twisting. Removal of the strap is achieved by applying greater pressure than that required for engaging and turning the pin in the opposite direction. It’s easy to do, but does take a little practice in applying the requisite amounts of pressure.

To adjust the fitted strap length there is a circular locking device built into each end of the neoprene part of the strap which, when turned, loosens the bootlace so that its length can be adjusted. The larger, neoprene element of the strap is almost identical in shape to the current version, with a smoother piping and a more elasticated feel, designed to further dampen the weight around the neck.

I found the new strap comfortable and highly effective in achieving its aims, whether it was attached to the lightweight 8x32 mm ELs (read the full review) – while enjoying crystal clear images of Siberian Jays deep in the taiga forest – or to the larger 12x50 mm model (read the full review), providing amazing views across landscapes of open tundra.

Another redesign is in the ‘floating shoulder strap’ which, although designed for buoyancy, is reshaped for comfort and includes the same ‘pin and ring’ connectivity found on the new neckstrap. It comprises layers of high-quality neoprene, with the amount of this material determined so that all of Swarovski’s regular binoculars will float if dropped accidentally in water. 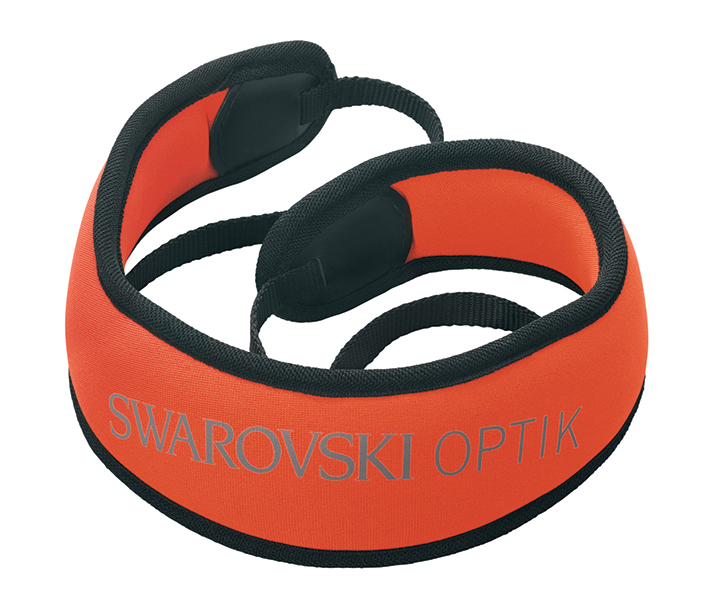 The floating shoulder strap will keep your precious optics safe if dropped in the water.


To demonstrate its effectiveness, one was thrown into Vadsø harbour, where it floated, successfully suspending the attached 8.5x42 ELs just below the sea’s surface. The bright orange colour increases visibility and enables you to more readily pinpoint a floating binocular and, although prominent, it is unlikely to have any adverse impact on observer conspicuousness in the environments in which it is designed to be used.

Users of harnesses have not been overlooked in this redesign package. Developed a couple of years ago, the manufacturer’s ‘bino suspender’ now has optional quick-release attachment rings so that it can be used with the newly designed EL body.

Which brings us back to the final and arguably most elegant design feature: the tethered objective covers. Flexible enough to hang vertically, even when the viewing angle is upward, they clip neatly into the rim of the objective housing, integrating to such an extent that they lose the appearance of an accessory. Their flexibility safeguards against blowing or springing back over the objectives to impair vision and their method of attachment ensures they do not fall off, although they are designed to unclip from the binoculars with a force of about 3-4 kg. Small plugs are supplied to cover the attachment ports if the lens caps are not fitted.

These new objective lens covers will be supplied with all EL models, as will the new neckstrap which, along with the other accessories, can also be purchased separately.