The bid to bring together three key elements of birding fieldcraft has been tackled head-on by Swarovski with the launch in April of the new dG digital guide. Many visitors to last year's Birdfair will no doubt recall seeing it for the first time, when the concept of combining observation, photography and identification had crystallised in the form of a demonstration model, on trial in the optics marquee. Setting a precedent, this is indeed a unique system that embarks on a journey which seems likely to add a new dimension to the future of birding optics. 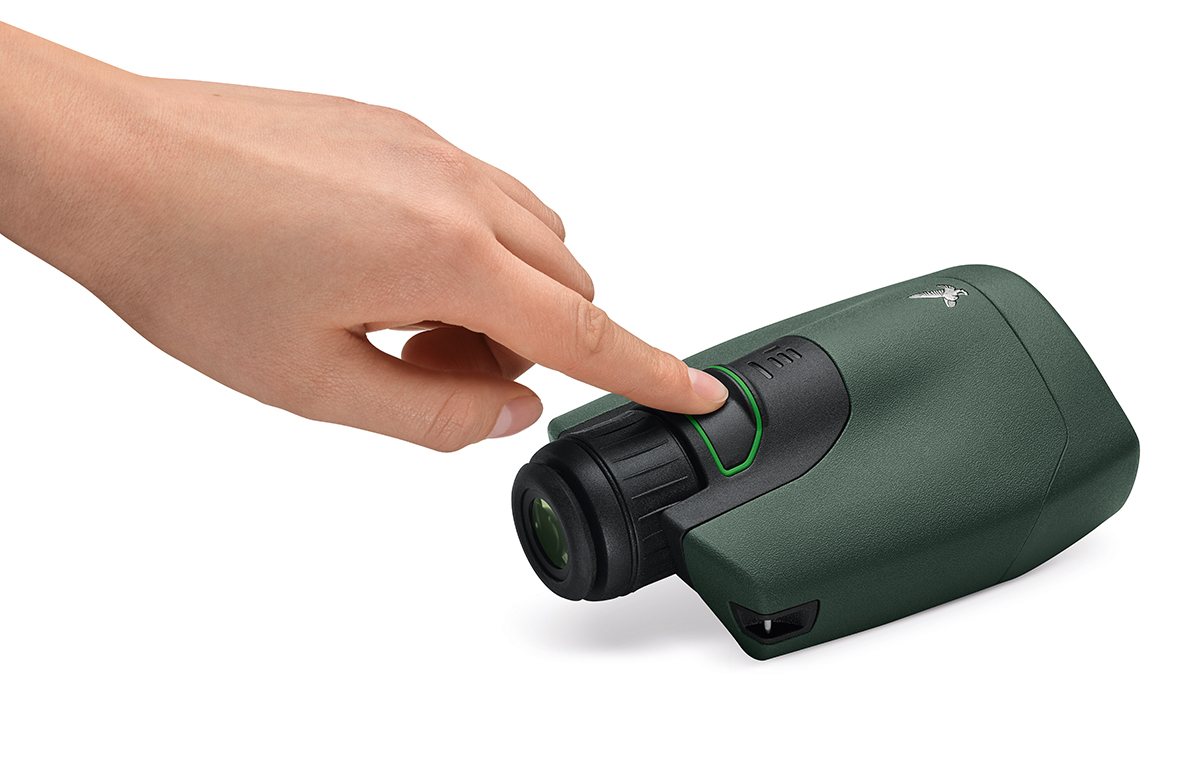 So what, exactly, is it? In simple terms, it could be described as a binocular in which one of the oculars has been replaced by a camera lens, with the body redesigned to accommodate a photographic system, thereby enabling simultaneous viewing and photography. But that's only part of it. The dG goes one step further, immediately transmitting captured digital images directly to an identification app on a smartphone, or tablet, via its own built-in wi-fi hub.

To be absolutely clear, the image viewed through the dG is an optical one – just like that delivered by any simple monocular or binocular. It is not a digital image and there is no internal LCD screen, the latter largely forming the basis for viewing through night-vision monoculars and digital binoculars.

Its compact design means it is no bigger than an average-size 8x32 binocular, although the single-lens ocular is centrally placed and effectively renders it an 8x25 monocular, with the optical system based on Swarovski's CL Pocket 8x25 binocular. As an added bonus, it's gas filled and waterproof for 30 minutes at a depth of 1 m.

Set up is easy and operation is simplicity itself. The dG has one centrally located push button, which operates the camera and electronics. A quick single press indicates battery charge level, as up to three bars illuminate against the adjacent battery symbol. A further press-and-hold for three seconds initiates a flashing orange light as the unit warms up, before it changes to a green flashing light and makes a single bleeping sound, indicating it is ready to be connected to a phone or tablet. The light remains green and flashing ceases when connected.

There is no SD card as the unit has a built-in storage capacity limited to up to 10 images when it is not connected to an external device. However, to fully utilise the dG for its intended purpose it needs to be connected to two different apps, both of which can be downloaded from the Apple App Store or the Google Play Store.

The first is the dG app, specifically designed for use with the unit. Once downloaded it's easy to connect with the dG simply by scanning the QR code or keying in the unit's serial number from the packaging, or from the unit itself by unscrewing the eyecup to reveal it. Up to five devices can be connected to the unit at any one time in this way, which allows multiple live streaming within a range of 5 m of the dG.

The second is the Merlin Bird ID app, the functionality and merits of which were previously reviewed in Birdwatch 306: 57 and on BirdGuides. Once downloaded, Merlin receives images taken with the dG directly for quick identification, while the dG app also acts as an image storage medium.

One final adjustment needs to be in place before field use and that is the dioptre setting. This is made by turning the ring located between the milled focusing ring and the twist-out eyecup to bring the four black boundary lines of the reticle into sharp focus to ensure the best possible photo quality. I found the boundary lines unobtrusive during use of the dG for general observation.

My first foray into the field was interesting. It was a bright, sunny afternoon and I had chosen a sparsely wooded area in which several species were feeding, including a number of Redwings. Catching up with these elegant thrushes in order to photograph them was not easily achieved with 8x magnification, as they didn't allow a close approach. However, in order to test both the camera and the ID resolve of Merlin, a long-distance shot was called for, the results of which are depicted below. Clearly, it works! 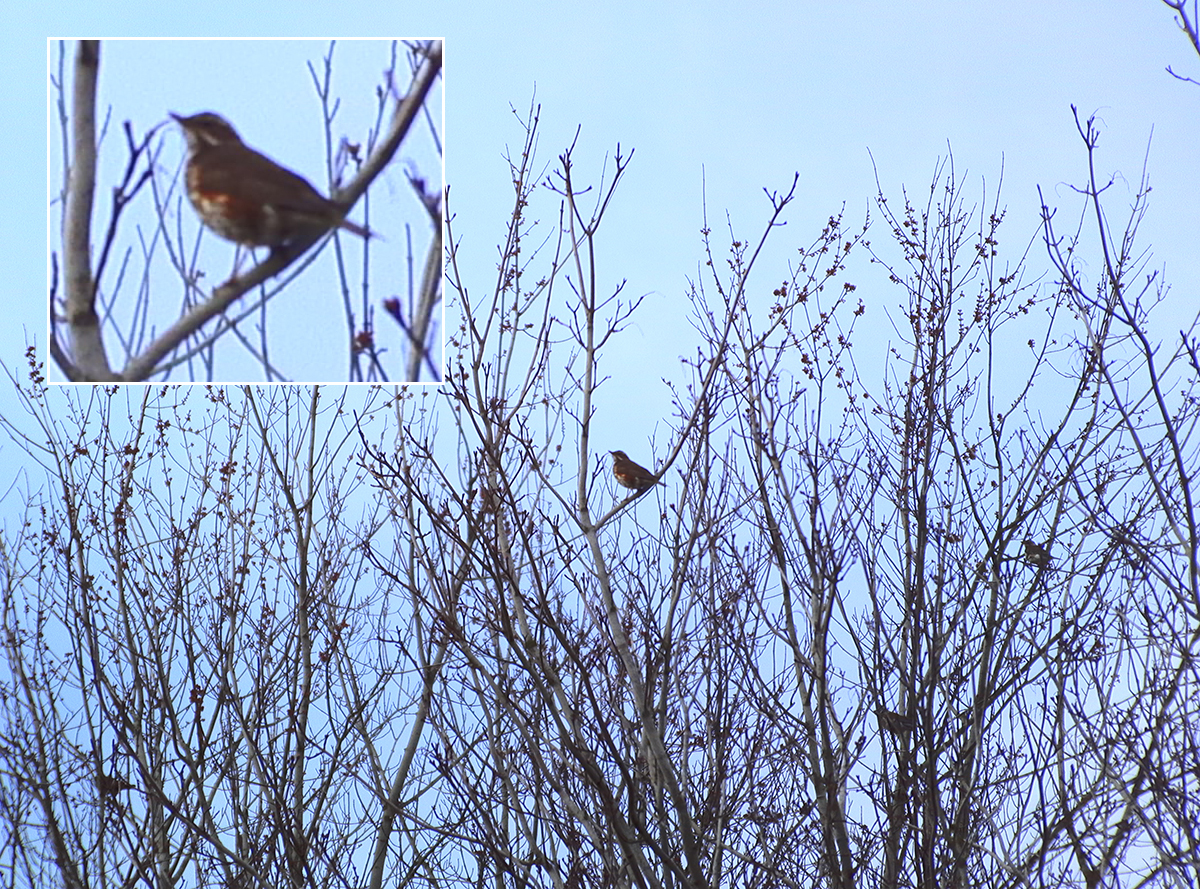 This shot of distant Redwings demonstrates the range of the dG. The Merlin ID app successfully identified the birds; see below (Mike Alibone).

Both the optical and photographic imagery of the dG are impressive, especially when the small diameter of the objective is taken into consideration. The image is bright, colour contrast is good and the image sharpness extends beyond the reticle boundaries, almost to the very edge of the field of view.

Regarding comfort, the unit is light in weight and can be held in much the same manner as a binocular, although there are no thumb-rests or differently textured areas to increase grip. The eyecup is comfortable, twists out and stays put in any desired position without the need for click-stopping. Holding the dG when using just one eye takes a little practice because there is no other ocular to keep it straight. So when using it with my right eye, I found myself looking at an image slightly to the left of the subject, as there was a natural tendency to hold the unit as I would a binocular – lined up with the middle of my line of sight – instead of holding it slightly to the right.

I also discovered that there is a difference between photographing a distant stationary bird and one which is fast moving at only a few metres' range. In the latter instance there is a need to reposition your hands and continually adjust the focus in order to obtain a fairly sharp image. Such was the case with a Siberian Chiffchaff at my local sewage farm. Allied to this there is a 1 to 1.5 second time lag between pressing the shutter and capturing the image – so keep following that moving bird. It takes practice!

As a bonus to capturing still images, it is also possible to shoot video on a mobile or tablet while the dG is connected, adding to the versatility of the bundle.

Before using the dG, I must confess I was initially sceptical but this ingenious marriage of technologies has proved its worth and it should be viewed holistically as a full package, without looking at each aspect of its functionality in isolation. It is supplied with a USB charging cable suitable for connection to a standard wall charger or power bank, a soft padded case, lanyard and protective lens caps.

The dG surely lays the foundation for further advances in optical technology and the way we watch birds. 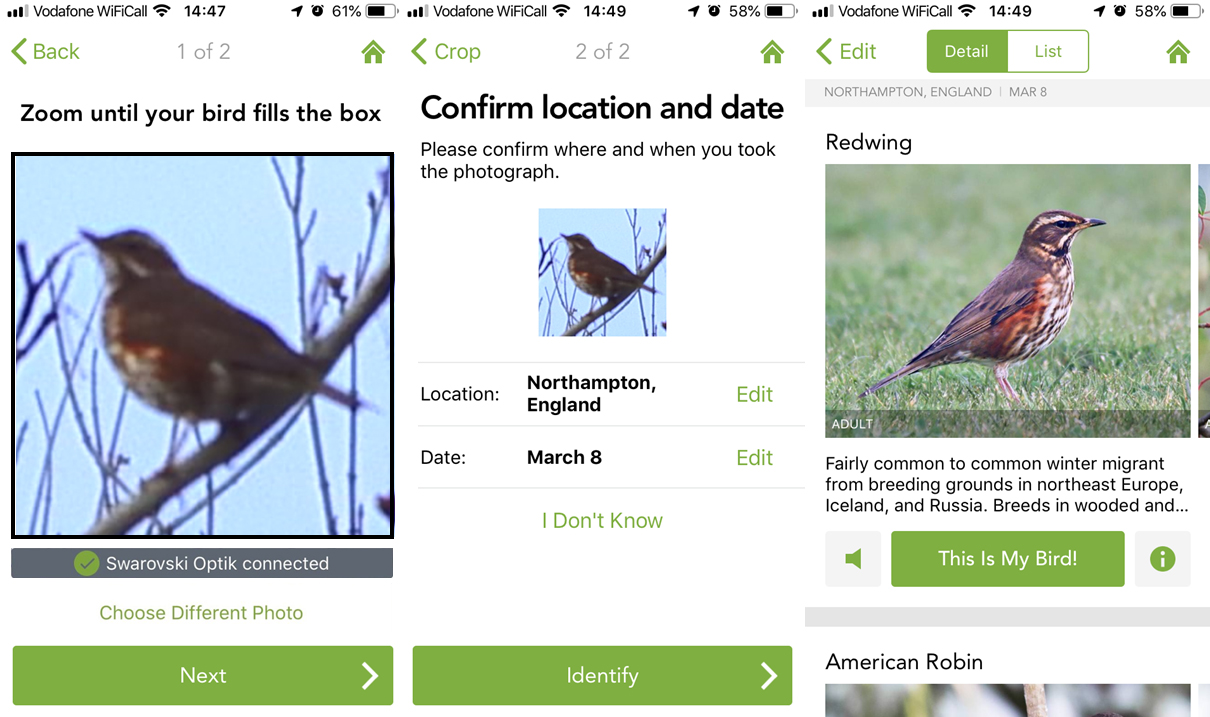