With economic uncertainty at an all-time high and purse strings tighter than ever, it’s good to know that there is no shortage of low-cost binoculars which are readily available to cash-conscious birders. With this in mind I took a look at two such 8x42 models, both under the Helios brand, available from Optical Vision.

Neither the Mistral WP4 nor the Ultrasport features ED glass, which is currently permeating the mid- to low-cost levels of the optics market, but this does not compromise their performance in the field. They are similarly priced, but their operation and appearance couldn’t be more different. The Ultrasport is one of many models now featuring the increasingly popular open-bridge design and this, along with its polycarbonate body, helps to peg the weight to a minimum – at 648 g this is one of the lightest 42 mm binoculars on the market. In contrast, the Mistral features a traditional hinged aluminium alloy body and weighs in at 745 g, although it’s slightly more compact.

Both models are nitrogen filled, covered in non-slip rubber armour, feel well balanced and are comfortable to hold. I found the hinge of the Mistral to be rather stiff, while that of the Ultrasport was more fluid, although once the interpupillary distance is set, this difference is arguably of little importance.

The Ultrasport’s central focusing wheel, although turning smoothly, is quite stiff and, coupled with its very shallow ribbing, I found my fingers slipping against it on a number of occasions. There was also a noticeable, though short-lived, increase in turning resistance around the mid-point of its 1.25 anti-clockwise revolutions between close focus and infinity. (Continues after the image.) 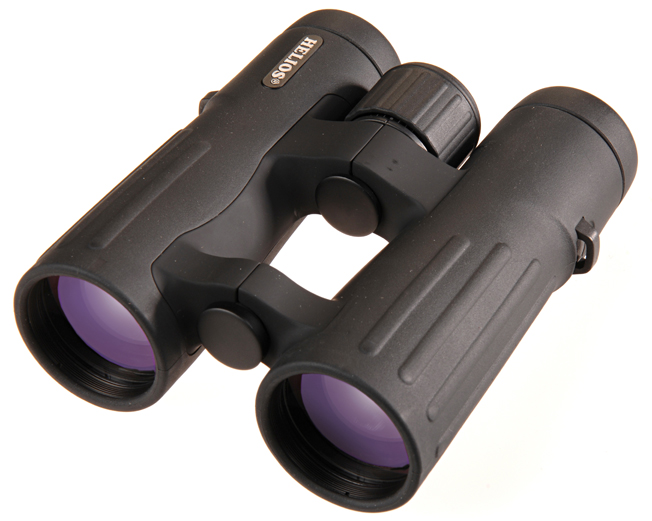 The Ultrasport's open-bridge design and polycarbonate body keep the weight down.

By contrast, the Mistral’s focusing wheel is more positively ribbed, consistently smooth in operation with less resistance, and delivers faster focusing through approximately 0.9 anti-clockwise turns between close focus and infinity. The first two-thirds of this covers a focusing distance ranging between a claimed 1.2 m (measured in testing at approximately 1.35 m) and about 20 m, while the last third ‘fast forwards’ to infinity. The close-focusing distance of the Ultrasport is longer at a stated 2.5 m (about 2.8 m in testing).

The Ultrasport integrates the dioptre adjustment into the main focusing wheel, which is pulled up to make the single-eye adjustment against a nine-point incremental scale before being pushed back down to lock the setting. The Mistral employs the more widely used rotating ring on the right ocular, although the setting relies on the turning resistance of the ring to keep it in place. I found both worked equally well with no slippage from the desired settings.

Both models feature adjustable twist-up eyecups, click-stopping in four positions. Those of the Mistral provide a visual setting scale and click-stop and lock more positively and less loosely than those of the Ultrasport, although I found the broadly curved edges of the latter model more comfortable against the eye.

Moving away from the differences in mechanical and physical aspects of these binoculars, I discovered there was little to set them apart when it came to assessing the images they delivered. A respectable 129 m at 1,000 m field of view is common to both, and both models exhibit a very low degree of curvature of field. They are also colour neutral and deliver bright images, although in poor light there is a slight tail-off in performance in this area. (Continues after the image.) 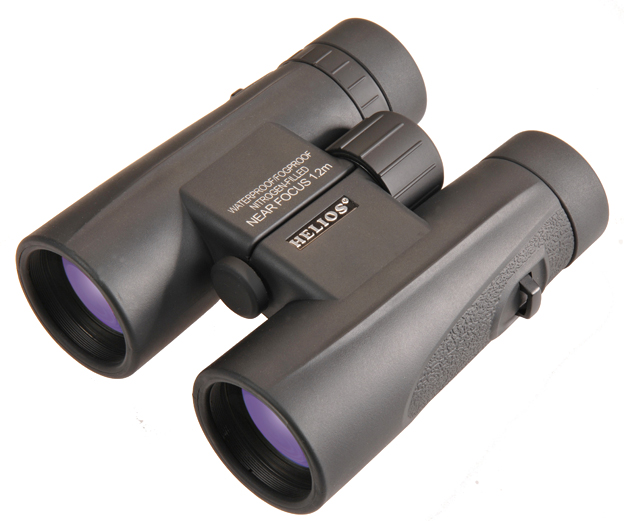 Mistral's focusing wheel is broadly milled and easy to use.

I felt the Ultrasport had a very slight edge when it came to brightness and colour fidelity, but this is marginal. The Mistral, however, appeared to show slightly better contrast. Though both models produced sharp images, I felt that the Ultrasport displayed fractionally less field-edge softness, though the deterioration in sharpness in this area was evident only in the outer 10 per cent or so of the image for both models.

They both appeared to show a similar degree of chromatic aberration, but not to any worrying extent and at an average level for binoculars in this price range. On the accessory front, both models come with soft carry-cases, padded neck-straps and articulated rainguards. The Ultrasport features tethered, soft, rubber objective lens covers – which I don’t like because they can flap about irritatingly and fall off – while the Mistral has neat, unobtrusive, clip-in, hard plastic lens caps, which I find much more acceptable.

So, two quite different models which appear to deliver a similar result – it’s down to individual user preferences and a small price difference when faced with making a choice.