Launched online in late March, the new Aurora BGA VHD range, comprising 8x42 and 10x42 models, takes Opticron's binocular portfolio to a new level. This latest addition to the collection has been designed on a new platform with a completely new optical system that elevates the Aurora to pole position, above former top dog, the DBA VHD plus.

Attention to detail with comfort, ergonomics and, of course, optical performance brought to the fore, the overall result seems set to appeal strongly to users in the market for mid-range optics.

To see for myself just how far forward this model has moved beyond the DBA VHD plus, I took the two out together to compare and contrast their overall performance.

On a side-by-side comparison, there are obvious physical differences. Moving away from the 'open bridge' (or double-hinge) design of the older model, the Aurora employs a standard, more centrally placed single hinge, allowing more space and comfort for your fingers to extend and fully curl around the objective end of the chassis. The latter is manufactured using magnesium alloy and polycarbonate, which is lighter in weight than the aluminium-based body of the DBA. 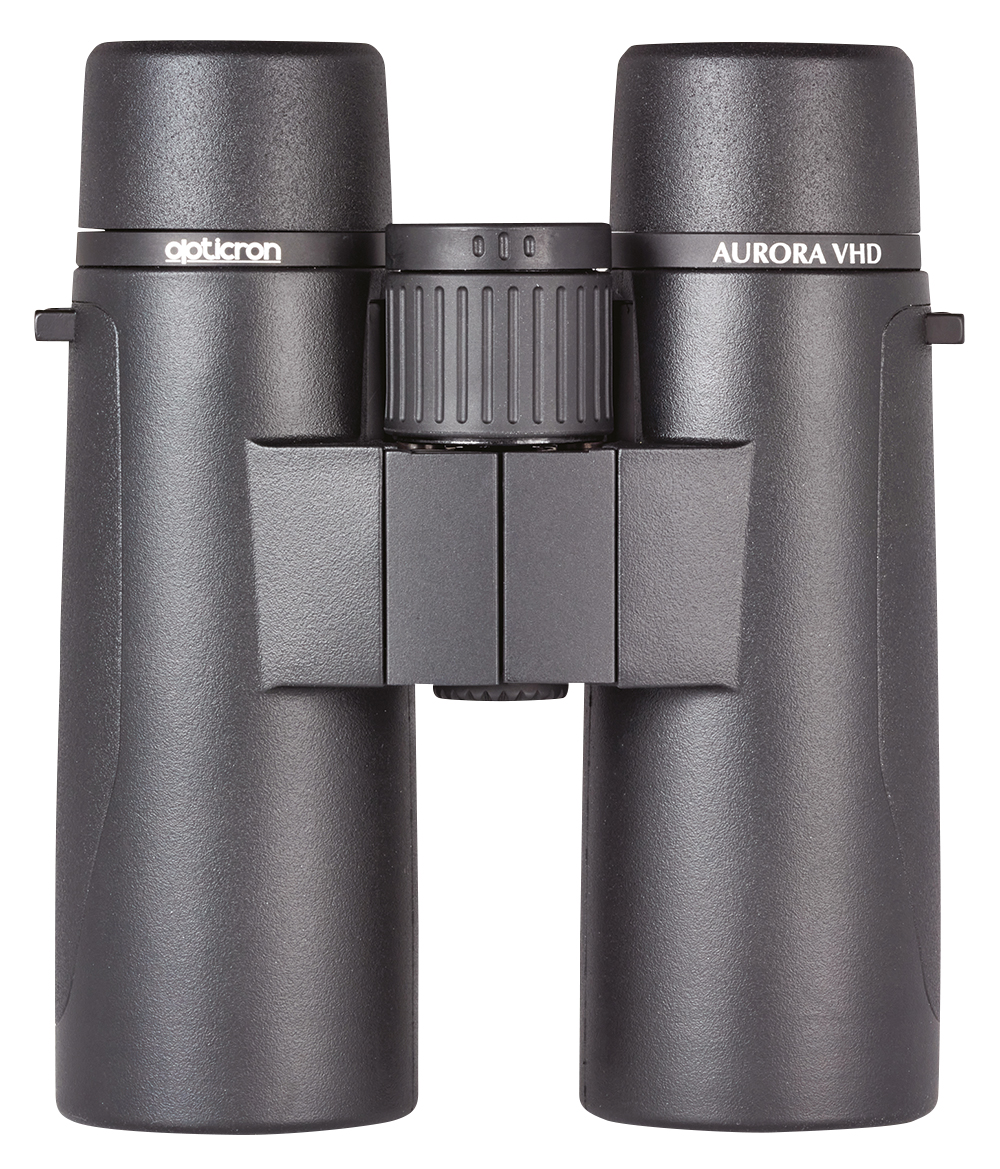 Despite this, at 725 g, the Aurora weighs 29 g more, but this is because it is 7 mm longer overall, principally to accommodate further glass elements, including an additional field flattener group. There is a total of 10 glass elements compared to eight in the DBA VHD, while the objective lens glass in the Aurora has a low refractive index and is comparable in performance to fluorite.

Gone are the predominantly aesthetic triple grooves of the DBA's body armour; instead a differently positioned, more heavily textured area of rubber has been integrated to increase the non-slip area in contact with your hands. As a result, the Aurora presents as a sleeker model, an appearance enhanced by its greater length due, in part, to the extended depth of the eyecups, which have been lengthened to accommodate an extra twist-lock position.

The eyecups offer four optional extension settings, as opposed to the DBA's three, although at 22 mm, the latter's eye relief is 2 mm longer than that of the Aurora. In both models I could see the full field of view at the first twist-out point, but not in any of the further extended positions. The eyecup area in contact with your face is broader and squared off in the DBA but narrower and rounder in the new model. I found them equally comfortable. I was a little disappointed with the 'looseness' of the extension settings as I found myself having to take care not to knock or rub the eyecups against anything. This was difficult when wearing them during field use and I found they had inadvertently changed position on a number of occasions.

Contributing to enhancing the viewing experience, at 23 mm, the eye lens diameter of the Aurora is greater than that of the DBA, while the Aurora's field of view of 141 m at 1,000 m leaves the older model's 122 m in the shade. This was one of the three most obvious differences between the two models and it’s a huge plus – opening up the horizon and lending a sense of 'optical breathing space', if you will.

The focusing system on the two models appears to be the same. The dioptre adjustment is centrally mounted, in line with the general focusing wheel. Pull it out, turn to the desired setting and push back in to lock. There is no scale to speak of and a lone, white indicator mark is used as a reference point.

General focusing is achieved comfortably via a smooth-turning, milled, central wheel, which is little more than a finger's width. In both models, two full, anticlockwise rotations take the view from close focus to infinity, but approximately one quarter of a rotation swiftly moves the subject in focus from a distance of 10 m to approximately 500 m in the Aurora, whereas this is closer to one third of a rotation in the DBA. The new model also has a shorter close focus distance of 1.9 m, which is a small win over the DBA’s 2.5 m.

Enough of the technicalities and minutiae – what about the Aurora's image? In addition to the sense of expanse conferred by the admirable field of view, I was pleased to note other positive differences in the Aurora over the DBA.

One of these was image brightness and this was immediately evident in overcast conditions. Image colour was better, too, being truer to life and lacking the deeper, marginally duller colours perceptible in the DBA. This particularly came into its own when watching some cracking summer-plumaged Bar-tailed Godwits  on one of my local patches in late April. Sharpness at the edges of the field was also a little better. Both binoculars exhibit low levels of chromatic aberration.

The Aurora BGA VHD comes with a soft Cordura case, flexible rainguard, generously long neoprene bungee strap and rubber objective lens covers which, I am pleased to add, did not fall off during use.

The price tag, just shy of £800, is the now highest in Opticron's binocular range and represents a £200 increase in price over the former top of the range DBA VHD plus. In this instance, I have to say, the higher price is justified, given the considerable leap forward in image quality. See for yourself.