Oceanic Birds of the World: a Photo Guide 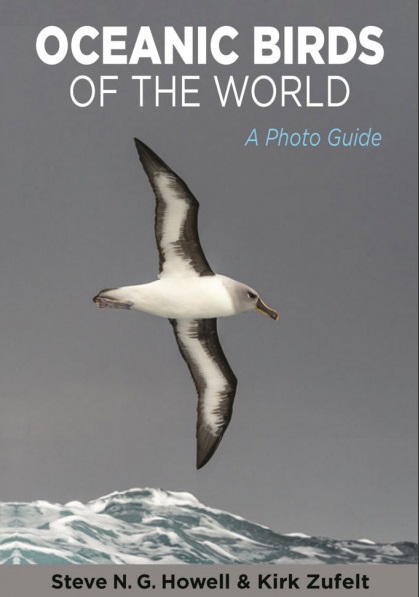 Approximately 270 species are covered in this photo guide, all of which are classed as 'seabirds' rather than 'seaside birds'; only a small number of pelagic gulls, terns and waders are included alongside the more traditional seabird families. The two authors, Steve Howell and Kirk Zufelt, have between them field experience of all but about 10 of the taxa covered and both are brilliant at-sea photographers, so no one can doubt their credentials in bringing our seabird knowledge up to date. Things have moved on a little since the pioneering guides by Peter Harrison in the 1980s, and this guide showcases current seabird photography and at-sea identification.

The opening 30 pages includes introductions to seabird taxonomy, hints and tips about identification at sea (including the use of moult sequences), where and how to watch seabirds and a short summary of conservation issues. The actual species accounts then cover the bulk of the 360 pages.

Text is brief but succinct, covering taxonomy, range and movements, moult timing and, importantly, flight styles. It is the images however that are the essence of the book, mainly isolated from their backgrounds (similar to the style used by the Crossley Guide series), but also featuring occasional nesting habitat and flock shots. This modern use of digital images makes for fantastic side-by-side comparisons of similar species and demonstration of ageing sequences, such as the amazing detail in the coverage of the great albatrosses. Short annotations highlight the key features shown in the images and multiple photos of each species ensure that nearly all plumage and age variations are covered in detail.

In fact, there are very few gaps. Cape Verde Storm Petrel and the newly described Trindade Frigatebird are without photos, but the fact that poorly known species such as Fiji and Mascarene Petrels and Bryan's Shearwater have multiple images demonstrates how comprehensive the coverage is. Maps are generally excellent and in colour, sometimes showing multiple related species in one view. Widespread Southern Ocean species are often shown in a circumpolar view centered on the Antarctic, which takes a little getting used to.

The up-to-date knowledge included in this guide is immense. Treatment of the multiple forms of Fregetta petrel and Band-rumped Petrel was of real interest to me, whereas identification coverage of the White-faced Storm Petrel complex and the various Noddy taxa is both eye-opening and ground-breaking. Gone are the days of having just one 'Madeiran Storm Petrel' perhaps, but the in-depth coverage also highlights how much more there is to learn about these cryptic populations. The frequent proposals to treat distinctive taxa as separate species is based on well-documented research and also furthers the need to highlight threats and conservation issues for these vulnerable seabirds.

There is no wasted space in this guide and one could argue that it would be even more enjoyable in a slightly larger format. But the authors set out to bring knowledge upto date in a field-friendly format and they have done this in abundance. An inspiration for future seabirding trips, a knowledge base for more familiar species, and a sheer delight to drool over the amazing images of gadfly petrels, alcids, albatrosses and storm petrels … anyone with an interest in seabirds needs to buy this guide.