Nikon has upped its game with the launch in September of seven new Monarch binoculars. Sitting between the manufacturer's entry-level Prostaff and top-tier EDG ranges, the M5 (three models) and the higher specification M7 (four models), went on sale in October and have been redesigned with "durable and stylish" bodies, with the M7 promoted specifically for birding and wildlife observation.

With that in mind, I took a look at two of the M7s: the 10x30 and the larger 8x42 (pictured below). Both follow the same design criteria, but their specifications differ, leading to different levels of deliverance in terms of ergonomics and optical performance.

As solid as they are, they are both relatively light in weight, and the same grip-enhancing, textured rubber body armour provides a uniform covering throughout. There are no thumb-rests or cutaways, but there is some subtle contouring below the oculars. The only other relief appears in the form of a narrow, 1 mm, recessed ring set back 8 mm and 12 mm from the end of the body on the 10x30 and 8x42 respectively. 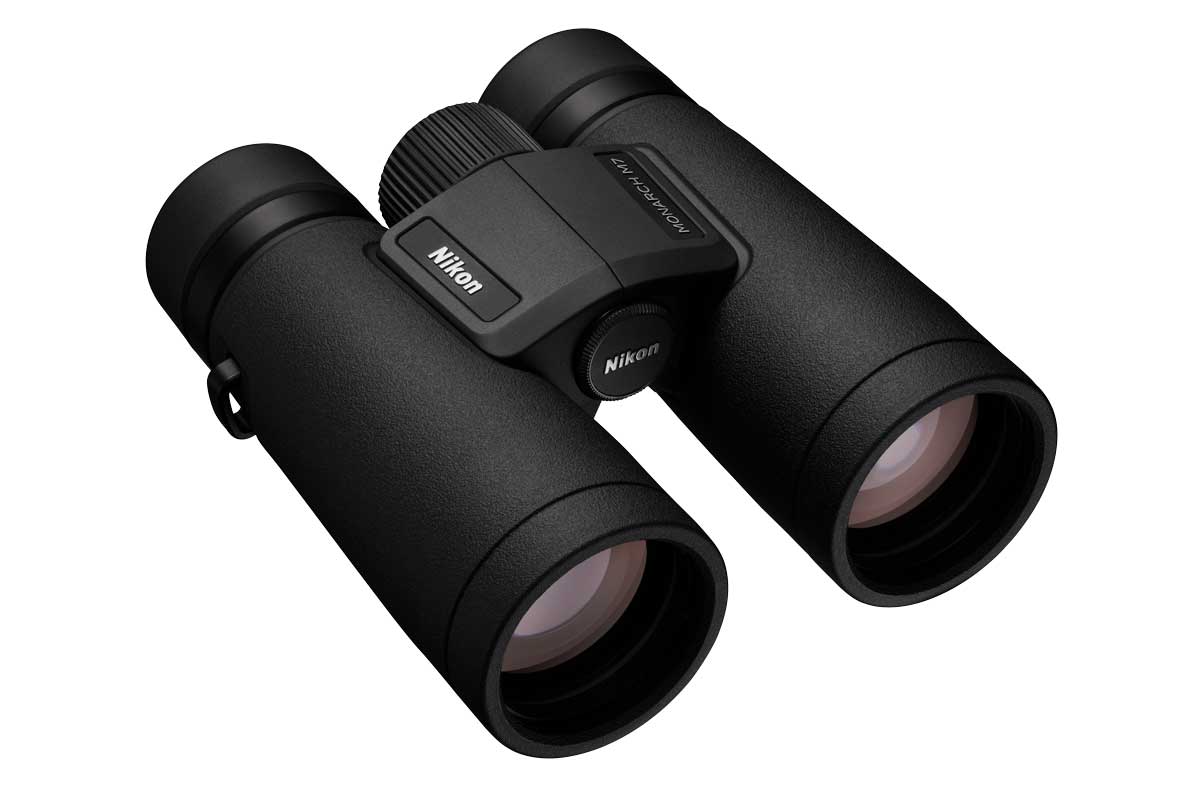 While seemingly part of the aesthetics, whether by accident or design, that on the 8x42 contributes to keeping the removable tethered objective covers in place. These covers diverge significantly between the two models. Both of them slot inside the objective housing, rather than clip over it, meaning they are less likely to get snagged and pulled off. However, the 10x30 has what I would refer to as a standard, single slip-over loop tether, while that on the 8x42 is a partial dual loop, which widens to incorporate a slot in part of the tether.

Having never encountered this before, I asked Nikon the reason for the difference. It appears that the 30 mm has a single tether to make the whole design cosmetically as simple and clean as possible, but if a single tether was employed on the 42 mm, the tethers would collide with each other when the interpupillary adjustment is reduced, blocking the minimum setting. The slot in the tether on the right barrel allows the insertion of the single part of the tether on the left barrel, allowing the minimum setting to be achieved.

I also found that this design contributes significantly to preventing the tethers from inadvertently becoming detached, which is often the case with objective covers of this type. In this respect, I have to say they are the best of their kind I have ever encountered!

Meanwhile, at the other end of the binoculars, the eyecups are covered in what I would describe as 'medium-soft' rubber, twisting out to click-lock in three positions above the closed setting. Resting comfortably against the eye, it was nice to be able to see the full field of view, regardless of position, in both models.

The dioptre adjustment is a smooth ring on the right ocular, with a small length of raised ribbing set opposite a simple, raised +/- scale. It works on a 'pull up to adjust and push down to lock' basis and requires the eyecup to be twisted up to the first position to change the setting.

General focusing is via a centrally placed, finely ribbed wheel in both models, almost one finger's width in the 10x30, but slightly wider in the larger model. Both wheels turn freely, with approximately 1.1 and 1.3 rotations, respectively, taking the image from closest to infinity. This means that general focusing is very fast, with little more than 0.1 clockwise turns focusing the image between approximately 10 m and 500 m. With close focusing, I managed to beat the manufacturer's conservative figures of 2 m for the 10x30 and 2.5 m for the 8x42, achieving 1.7 m and 2.3 m respectively.

Both models are equipped with ED glass and include a dielectric high-reflective multilayer prism coating to increase light transmission. External glass elements are also multi-coated and include an oil- and water-repellent coating.

How does all this translate to performance in the field? In both models the image is generally bright and the overall colour rendition is at the cold to neutral end of the scale. I was pleased to experience clear, natural tones across a variety of habitats, which included the pale straw of stubble fields and reedbeds not falling foul of reflecting the darker, brownish tinge often delivered by many low- to mid-range binoculars.

There was also a significant difference in field of view between the two models: the smaller, higher-magnification binocular returning a field of view of 117 m at 1,000 m, compared to the much wider 145 m of the 8x42. However, there was never the feeling of a 'restricted outlook' with the 10x30 – 117 m is a respectable value for a binocular of this specification and one aspect associated with this was the edge-to-edge image sharpness across the entire field. Although the 8x42's image was nicely sharp, it did not extend to the very edge of the field.

Both models showed a little chromatic aberration, but not enough to cause any real concern, and there appeared to be no difference between the two in this respect. They both come with soft, padded cases which include belt loops instead of straps, comfortable padded lanyards, articulated rainguards and the aforementioned tethered objective lens covers.

With each model presenting different characteristics, the choice between them may not be so straightforward and will ultimately be a matter of personal preference.

Where two figures are given, the first is for the 10x30 model and the second for the 8x42.

+ Image is generally light
+ Clear, natural colours across a variety of habitats
- Some chromatic aberration in both models