Autumn 2015 saw the launch of the upgraded Manfrotto 290 range of tripods and related kits. Although aimed at photographers, the three products in the set work well for birders, too. The largest in the range is the 290 Xtra Carbon. I used this tripod with two different heads extensively throughout winter.

The design and build quality are consistent with Manfrotto's typically high standards. The three lightweight leg sections are constructed from three layers of carbon fibre and other materials and secured at the required length by aluminium lever leg locks. These small, thumb-sized levers are unobtrusive, though sturdy, and should they work loose, they can be retensioned using the supplied leg lock adjuster tool, which simply clips onto one of the legs.

When extended and locked, the legs form a very stable platform, with seemingly enough flexibility to dampen vibration caused by wind. The persistently windy weather over winter provided me with ideal testing conditions in this respect.

Each leg has a tight-fitting, hard-wearing rubber foot, approximately 33 mm deep. While these are designed to be removable they do not detach readily — as I found to my relief on the few occasions I managed to sink the tripod in several centimetres of thick mud. 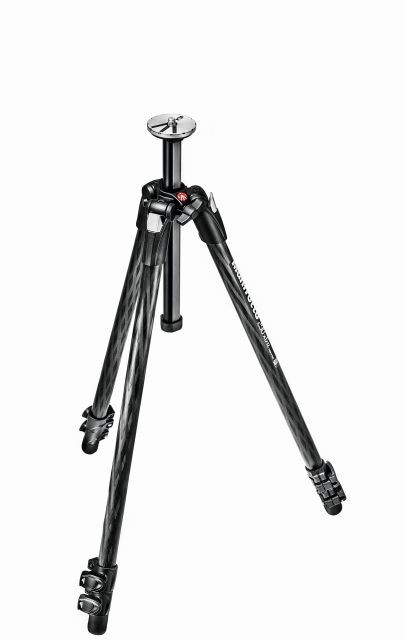 Depressing a lever at the top of each leg allows the angles to be adjusted independently and click-locked in four positions. Although this function is intended for low-level photography, it may prove useful when the tripod is required for use in confined spaces.

There is no rubber or foam covering to the top sections of the legs. This means that carrying the tripod over your shoulder for long periods is likely to result in some discomfort, particularly on warm days when too few layers of clothing are worn to provide protection. The aluminium version of the tripod, which weighs 240 g more, does have what's described as a rubber 'leg-warmer' on the upper section of one of the legs.

With the legs fully extended I did not need to raise the centre column to use an angled telescope, although some people would have to raise it fractionally to look through a straight-bodied scope without bending or stooping. The centre column is extended manually by pulling it up and is locked securely at the desired height by a winged screw at the tripod's apex.

Made from die-cast aluminium, the 128RC Micro Fluid Video Head is a tried and tested workhorse which, through its simplicity of design and ease of use, has enjoyed lasting popularity with tripod users over two decades. It is supplied with a quick release plate (QRP), which includes an anti-rotation pin for attachment to any telescope. Models from Kite, Leica and Swarovski do not use this, instead having attachment feet that are designed to clip directly into Manfrotto heads. 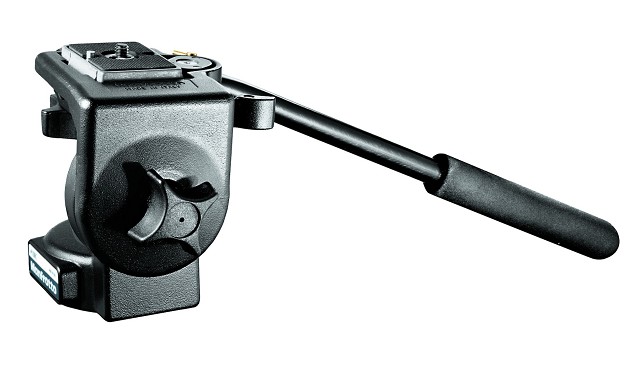 It has a detachable pan handle, the angle of which can be adjusted, and a spring lever locking system that snaps into place over the QRP to secure it. A secondary locking lever can be used to prevent accidental disengagement. Winged screws on the side and in the centre of the base of the head allow the user to lock and vary the tilting and panning resistance respectively.

The 128RC has a maximum load support weight of 4 kg, which should be more than enough to accommodate a telescope and digiscoping kit.

I found this head turned very smoothly in both horizontal and vertical planes, as well as being simple to operate. My telescope remained balanced during general observation, but when I attached a compact camera and digiscoping adapter the change in the centre of gravity meant the scope no longer remained horizontal, unless locked in place.

I then switched to the MVH500AH Lightweight Fluid Video Head. This has a sliding QRP which can be adjusted and travels horizontally to balance any digiscoping kit it is carrying. 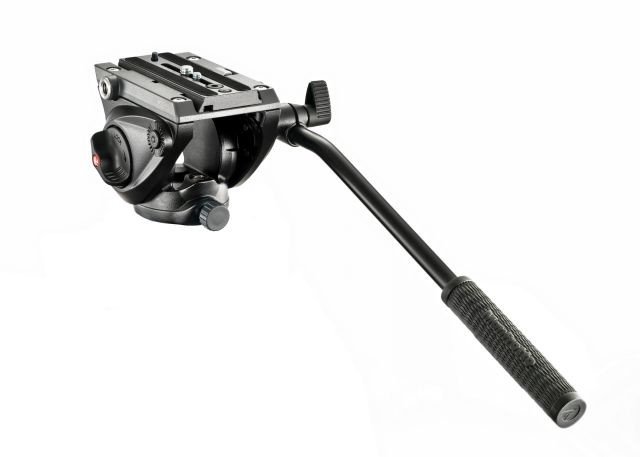 The scope's position can be varied on the plate, which accommodates an optional anti-rotation pin at one end. Making use of the pin, I found it unnecessary to position my telescope anywhere other than at the 'lens' end of the plate, and this delivered enough travel (approximately 100 mm) along the head to easily balance the scope, keeping it level both with and without a camera attached.

There is a neat side-locking system which allows the sliding QRP to click quickly into the head from above, instead of needing to be aligned and inserted from the back; no secondary safety lock is necessary.

To facilitate the correct positioning of the telescope, the head has a pre-set counterbalance of 2.4 kg working with a spring tilt mechanism which returns the head to the horizontal position when not locked.

While the aluminium MVH500AH is bulkier than the 128RC I was surprised to discover that, at 900 g, it is a full 100 g lighter. It has a support weight capacity of 5 kg and, unlike the 128RC, has a port to connect the pan handle on the left side as well as the right. The pan handle is marginally shorter than that on the 128RC because it is on a larger platform and set back, closer to the operator. I found it a little too long, but there is some small leeway for adjustment.

Operating on a fluid cartridge with fixed drag, both pan and tilt functions were very smooth, with the former offering a fraction more turning resistance than the latter. Both can be rapidly varied and locked by adjusting a broad-winged screw on the side of the head and a smaller, milled screw on its base.

Priced at £195, the 290 represents solid value for money. The 500 counterbalanced head certainly improves digiscoping performance when compared with a fixed head such as the 128RC, and if you're videoscoping it goes a long way to removing 'jerkiness'.

The 290 tripod comes with a canvas carry bag and the guarantee can be extended to 10 years when registering your purchase.