Second only to Hawke's premier, Frontier binocular series, the Endurance has come a long way in the last 15 years, enjoying several new incarnations since I covered its launch back in 2006 (Birdwatch 174: 47).

As users become increasingly demanding, as well as being more optics savvy, manufacturers cannot afford to sit on their laurels, so a series of rolling upgrades was introduced and phased in across Hawke's complete binocular range throughout 2020-21. Integral to this, the Endurance models now benefit from a number of internal improvements and modifications, optical enhancements and an updated look. They also boast bigger eyepieces, changes to the twist-up eyecups, a new focusing wheel and new rubber armour.

To find out how these improvements translate to performance in the field, armed with the ED 8x42, I ventured forth into a variety of habitats during a period of not-so-cold winter days. 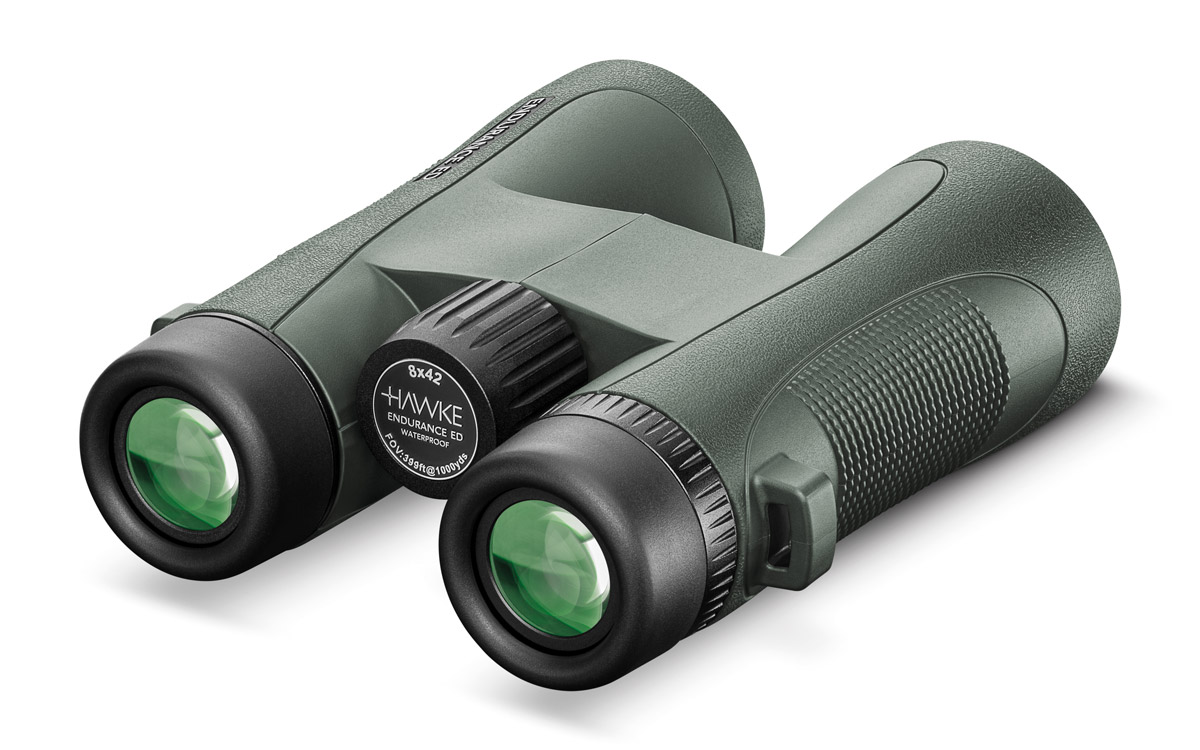 Given that this model retails at a mere £259, I was very quickly pleased with its overall performance. At this point, it seems pertinent to highlight the differences between this model and the 'old', 2015 model. On the face of it, the overall appearance is very similar. With its stippled outer section, the new rubber armour takes on the same look as that of the previous model, providing the grip where it's needed, in the palm of your hand, at the bases of the fingers. However, there are no longer any shallow cutaways or thumb-rests which, in this instance, are not really necessary.

The overall length is 5 mm longer, the weight has increased by 53 g and the new binocular isn't as compact as the previous version. Having said this, it has a 42 mm objective and doesn't feel oversized or weighty for a binocular in this category.

Neither the newly designed central focusing wheel nor the single-eye focusing ring, mounted on the right ocular, are rubber covered. They both now have a deeper, 'toothed' effect to increase finger contact and reduce slippage. In this respect they adequately fulfil the objective.

I found the central hinge rather stiff, but at least that meant it kept its position after the required interpupillary distance had been set. It also contributes to the binocular's robust and sturdy feel.

The only moulded protrusions on the otherwise slick rubber body covering are the broad strap lugs located, as in the last model, directly opposite the central focusing wheel. These dig into the hand and prevent the focusing finger from remaining comfortably straight. Also protruding are the ports for the clip-in objective covers, which are a benefit in this instance as they hold the covers in position, considerably reducing the chances of them becoming accidentally detached, as well as contributing an integrated, aesthetically enhanced appearance to the model.

In terms of operation and performance, the Endurance scores well for a binocular in this price range.

Aside from a barely detectable single click as you turn the focusing wheel from the close-focusing distance of a spot-on 2 m, the wheel turns smoothly throughout the two anticlockwise rotations up to infinity. It takes approximately one third of a turn to take the focused image from a short distance of 10 m to the much longer range of approximately 1,000 m.

The single-eye focus (dioptre) turns smoothly, and while not lockable, it offers enough resistance to stay in place once adjusted.

I found the smooth, round-edged eyecups very comfortable against the eye. They twist out to 'sit', but not firmly lock, in three positions above the base setting. I was able to see the full field of view only when the eyecups were either fully retracted or on the first setting above the base.
The field of view has been increased by 4 m over and above the previous version of this binocular, up from 129 m to 133 m at 1,000 m.

Reflecting natural colours, the image itself is pleasingly bright, with a warm caste. It remains sharp across the major part of the field but, like the previous Endurance 8x42, it softens somewhat in the peripheral 5-10%, although this is not really noticeable in everyday field use. There is also some noticeable field-edge curvature, which is only really apparent when viewing vertically straight objects such as telegraph poles and edges of buildings. In natural habitats it effectively goes unnoticed.

Chromatic aberration is relatively low and largely insignificant in the middle third of the field. It did not detract from watching winter thrushes, back-lit in bare tree branches against a pale sky, nor did it pose any real problems when viewing wildfowl in reflective aquatic environments.

Overall, this is a neat binocular for the price tag, constituting worthy consideration for anyone not wishing to spend an additional £390 on Hawke's top model, the Frontier APO. It is available in black and green and comes with a comfortable stretchy, padded lanyard, a semi-rigid, zip-up carry case, objective lens covers as already described and an articulated rainguard.