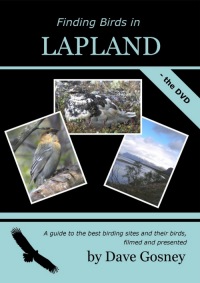 First I must declare an interest. Back in the mid-1990s, when Dave Gosney and I first set up BirdGuides, we travelled together around the Arctic making a film that covers much the same ground as this new DVD from easybirder. That film was literally a film: shot on super-16 Kodak negative at something like £100 a finished minute by the time you had it developed, telecined (if you don't know what that process is, thank your lucky stars) and spliced together. Now, 15 years later, DG has returned with an HD video camera (10p a minute) accompanied by his partner and fellow film-maker Liz Hall. Travelling in a camper van that often doubles as a photographic hide, they have revisited and filmed the birds and landscapes of northern Finland and Norway in mid-June. The result is an enjoyable 76 minutes that conveys an evocative impression of travelling around one of the great birding destinations in Europe and indeed the world.

Finding Birds in Lapland is the sixth new DVD in the easybirder range continuing the original 13-part Birding In... series of travel adventure films that Dave Gosney presented for BirdGuides. The format is simple and effective. We follow Dave as he journeys around a fabled birding region, filming and sometimes failing to film its birds. On the way we gain a clear impression of the landscape, habitats and their characteristic avifauna. Accompanying the DVD is an all-new 38-page booklet (sold separately) that provides superbly detailed maps and concise notes explaining exactly where to look for all the species that make Lapland such a desirable birding destination. 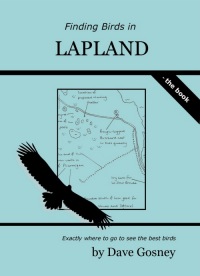 The combination of book and DVD is a winning one: perfect preparation for anyone contemplating an adventure to visit to this special part of the world. Photographers will gain an immediate sense of the marvellous possibilities offered by 24-hour daylight and confiding birds in full breeding plumage, occupied in a frenzy of reproduction among the beautiful tundra, bogs and fjords. Almost all the key specialities are featured in vivid close-up: Steller's Eider, Temminck's Stint, Long-tailed Skua, Red-throated Pipit, Pine Grosbeak and singing Bluethroat. White-tailed Eagle was the trash bird of the trip.

If I have a criticism, it is that the film is aimed exclusively at a birding audience and focusses relentlessly on the birds themselves. There is no opportunity to meet fellow birders or to encounter the local inhabitants of Lapland, something that would probably appeal to non-birding travelling companions. But one cannot deny that the booklet and the DVD in combination achieve admirably what they set out to: guide you with good humour and lightly carried expertise through a great ornithological paradise. Recommended.

You can buy both of these products on the BirdGuides estore.
Running time of the DVD is 76 minutes.
Book is softbound and 38 pages.