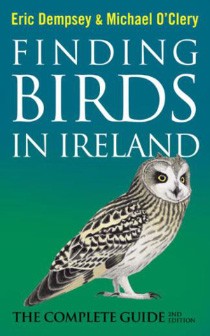 I first travelled to Ireland back in October 2006 (for the Canada Warbler at Loop Head), but it was only in 2008 that I started visiting the country regularly as a birder. Eric Dempsey and Michael O'Clery's Finding Birds in Ireland, which appeared in bookshops in 2007, was still a very new publication back then. Being the first of its kind, it played a pivotal role in making birding in Ireland much more accessible, unmasking crucial details, directions and tips for many of the well-known (and less well-known) birding locations right across the island. For Brits such as myself, it was an essential tool and my now expansive knowledge of Western Ireland's birding sites is largely thanks to this book — with the additional support of Google Earth and a few OSi maps of course!

Seven years have passed since the first edition was published and, as the authors point out in the introduction, "interest in birds and birdwatching in Ireland has grown significantly" in that time. As a result, some entirely new birding hotspots have been discovered (and some lost) and, bird-wise, new species have been recorded. Given these changes and the fact that access and directions have changed for many of the existing sites, Dempsey and O'Clery have taken the opportunity to publish a fully updated second edition of their work.

The introduction has been refreshed — for example, it was nice to see that the road maps have been updated to show the altogether more extensive motorway network that Ireland now offers compared to 2007. Much like the birding scene, Ireland's roads have improved drastically in the past decade and getting around the country is now far less troublesome — and vastly quicker. More crucially, though, the 'Common Species' section has had a facelift and each entry now boasts its own individual illustration — a significant improvement on the first edition's occasional plate interspersed among the text.

But what determines whether the second edition is a worthwhile purchase is the main Sites section, and how it compares to the first — has it been updated and expanded satisfactorily? A quick glance at the index shows that the new edition contains 282 site entries, compared to 275 in the first — not a massive leap but notable nonetheless, particularly when you consider some now defunct sites such as Mallow Sugar Factory Lagoons and Culmore Dump have been omitted. The additions as main sites are as follows: Avoca (Wicklow), Croagh Bay and Bantry (both Cork), the Tarbert area, the Inny Estuary and Coosgorm Rocks (all Kerry), Bell Harbour (Clare) and Carrowmore Lake (Mayo) — it's worth noting that a few of these were included in the first edition, though just as minor sites lacking maps and any real detail.

For anyone who isn't familiar with the original, it's worth touching on the layout of this section. Main sites are accompanied with extensive details, directions and lists of likely species season by season. Many have diagrams indicating the best time of year to visit, while the annotated maps are excellent, arguably the jewel in the crown of this section — I've always found them extremely helpful, particularly when trying to locate obscure sites along minor Irish back roads! In the latest edition some entries, such as Inishmore (Galway), have been redrawn and improved to reflect the improved text.

The blurb claims that the book has updated "all of those sites described in the first edition". Close examination revealed that this was generally true in the case of updated species lists (particularly rarities), but not so much in terms of site descriptions. I decided to pick a few examples of sites that I know well, to compare them to a) the first edition and b) my own experiences. There are certainly some fine examples of improvement, such as the aforementioned Inishmore. There are, however, a number of entries where text, details and directions have not really evolved where they perhaps should have. Take, for example, my west-coast location of choice — Achill Island. The past four or five autumns, despite relatively minimal coverage, strongly suggest that this previously near-untouched gem on the Mayo coastline offers enough to be labelled one of the west coast's most exciting locations for autumn birding. Several new sites have been unearthed, such as Keel Golf Course, which is rapidly establishing itself as one of the best locations for finding Nearctic shorebirds in Western Ireland. The second edition fails to mention these — in fact the only change in the text is that in the 'rarities' section: "Achill has potential in autumn to attract rare migrants" becomes "Achill has recently been shown to attract rare migrants in autumn". I'll happily admit that this isn't untrue, but I have a vested interest in this site and, to me, this is bordering on lazy — a bit of research could have led to an entirely revamped and more accurate text for this site which in turn would have helped prospective visitors to find the best sites. The island is given a little over a page in the second edition, the same as the inland Loughs Conn and Cullin — both lakes that are hardly known for their birding spectacle or rarity lists.

There are further examples of imbalance throughout the publication. For example the near-inaccessible Inishkea Islands are allocated half a page, but the loughs and coast of South Mayo — including the brilliant Corragaun Lough, recently proving to be one of the most promising sites for rarities in the county — are omitted entirely. The Limerick section fails to mention the nature reserve at Coonagh, another site that has recently attracted an enviable list of good birds. Being a Kerry man, Michael O'Clery certainly knows the county better than I do, but I was surprised that Coosgorm Rocks was allocated its own site and not just combined to create a fuller entry as Valentia Island — this little-watched island holds bags of potential for passerine migrants and more besides. The map at least illustrates the locations of some of the extremely tasty-looking gardens here, and one hopes it's not long before someone digs out a Nearctic wood-warbler or similar to put the place firmly on the map.

Though I've spent a couple of paragraphs nit-picking, I do want to point out that this is a very good book, and is one that any prospective (or indeed returning) visitors to Ireland should possess. It's a more than handy reference to have on you and, crucially, gets you to the sites and gives invaluable tips on a) what to look for and b) where to look. My only gripe is that I believe a little more effort could have been invested in updating the sites more consistently — but that should not detract too much from the quality of the publication as a whole, and indeed the great work that went into it in the first instance.