Britain's Orchids: a field guide to the orchids of Great Britain and Ireland 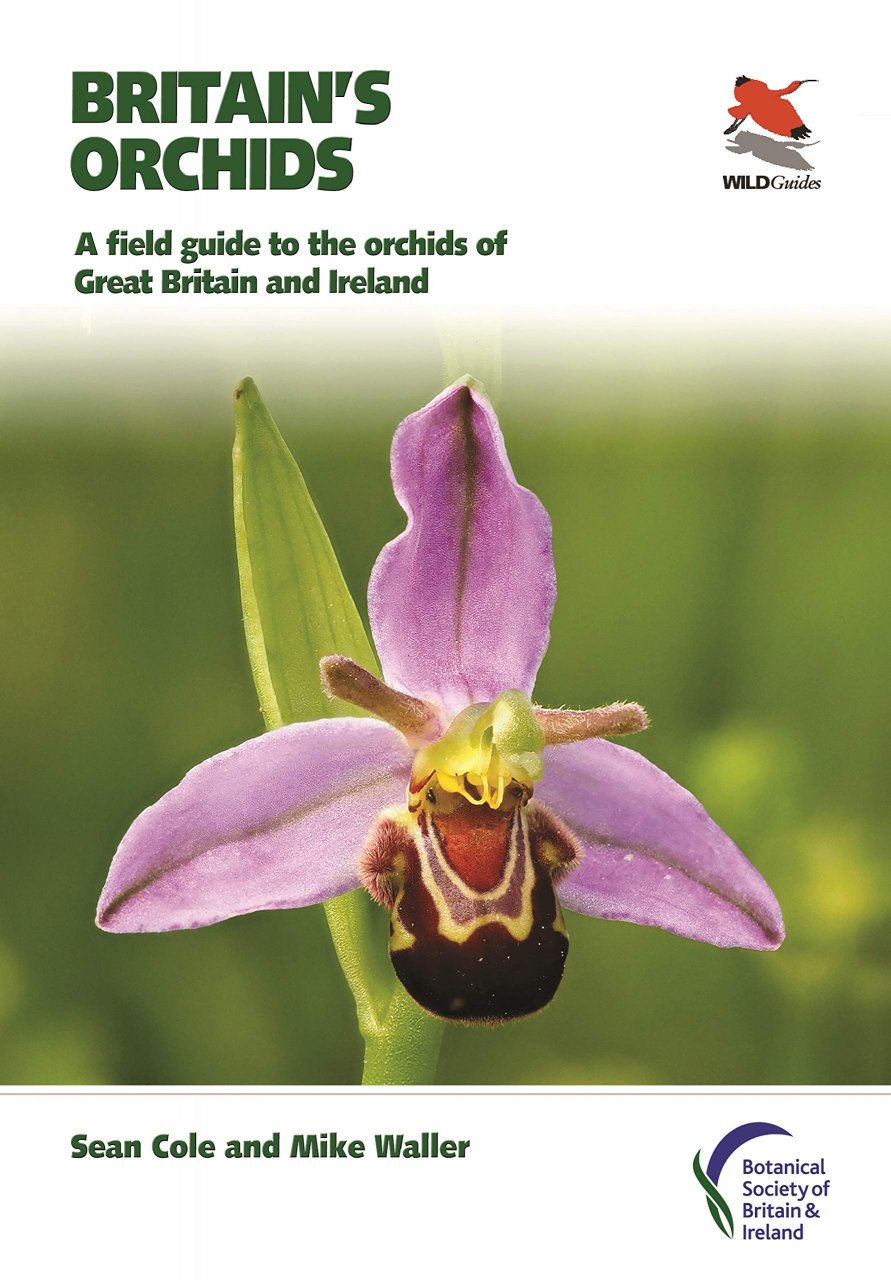 The latest instalment in the WILDGuides field guide series to British and Irish wildlife is a brand-new tome dedicated to among the most celebrated and often enigmatic of all our flora – orchids.

The newly published Britain's Orchids: a field guide to the orchids of Great Britain and Ireland is the result of years of unrivalled study and effort from two of Britain's most knowledgeable and highly regarded orchid fanatics, Sean Cole and Mike Waller.

For those who already own some if not all of the previous titles in this series, the layout will feel familiar – and, just like its predecessors, effective use of space throughout means that this is a guide crammed with information, yet presented in a clear and easy-to-digest manner.

An extensive introductory section extends to 100 pages in length, starting with the overarching 'What is an orchid?', which touches on the varying phenology, reproductive strategies and physical forms of different species. Following this comes an overview of taxonomy, clearly and coherently conveying the differences between species, subspecies and colour forms (of which there are many among orchids!).

As a relatively amateur orchid hunter, I know only too well how difficult (and consequently frustrating!) it can sometimes be when searching for species you've not seen previously. Yes, you may have a good idea of what you're looking for, but understanding the particular niches that your quarry inhabits can be a challenge first time out. On numerous occasions I've found myself ambling around for hours, only to stumble across my target almost where I started. It was with this in mind, then, that I found the sections on 'Habitats' and 'Finding orchids' particularly well thought out and helpful. While nothing substitutes for actually being in the field and searching for yourself, the 11-page photo-section entitled 'Orchids in their habitats' is, in my view, one of the most valuable parts of this book, for the photos provide crucial visual pointers on the micro-habitats in which to search for your target.

No stone is left unturned and further helpful sections follow: a photo guide to identifying orchids in leaf – comparing the real things to a range of confusion species, such as plantains or Adder's-tongue – ensures that orchid enthusiasts can readily identify plants throughout the year. The inclusion of a 20p piece for scale is handy throughout. On page 76, we are treated to our first taste of Sarah Stribbling's wonderful artwork (which is a staple of the species accounts), with her gloriously real-life depictions of British and Irish orchids in bud. This is followed by a look at identifying orchids in flower, comparing photos of a number of lookalikes that can and do act as pitfalls to finding the real thing – not least the photo of a Bluebell in seed, which must have caused the discoverer a heart-stopping moment while on the search for Ghost Orchid …! An 11-page 'glossary' of Stribbing's illustrations, showing all British and Irish orchids in their full flowering glory, rounds off the introductory section. Very aesthetically appealing indeed.

After an epic introduction, which would make a sufficient book in itself, we eventually arrive at the species accounts. Each is, as you'd expect, jam-packed with information. As well as the sublime illustrations and a series of photos (these ranging from macro close-ups to wider, 'in habitat' shots), each species has a range map, conservation status and a calendar showing phenology, while the text covers details on physical appearance, habitat, identification features, confusion species, legal protection and the like.

It's great to see some of the trickier genera given extra space – namely various Dactylorhiza species! Take, for example, the 32 colour photographs demonstrating the variation in Common and Heath Spotted Orchids, which allow for direct comparison between these often hard-to-separate species. Northern and Southern Marsh Orchids also receive similar treatment, while there's a double-page spread dedicated to the often-misidentified Pugsley's Marsh Orchid. The great variation in Britain's Ophrys species also gets the attention it deserves, with 30 photographs illustrating the differing forms of four orchids. 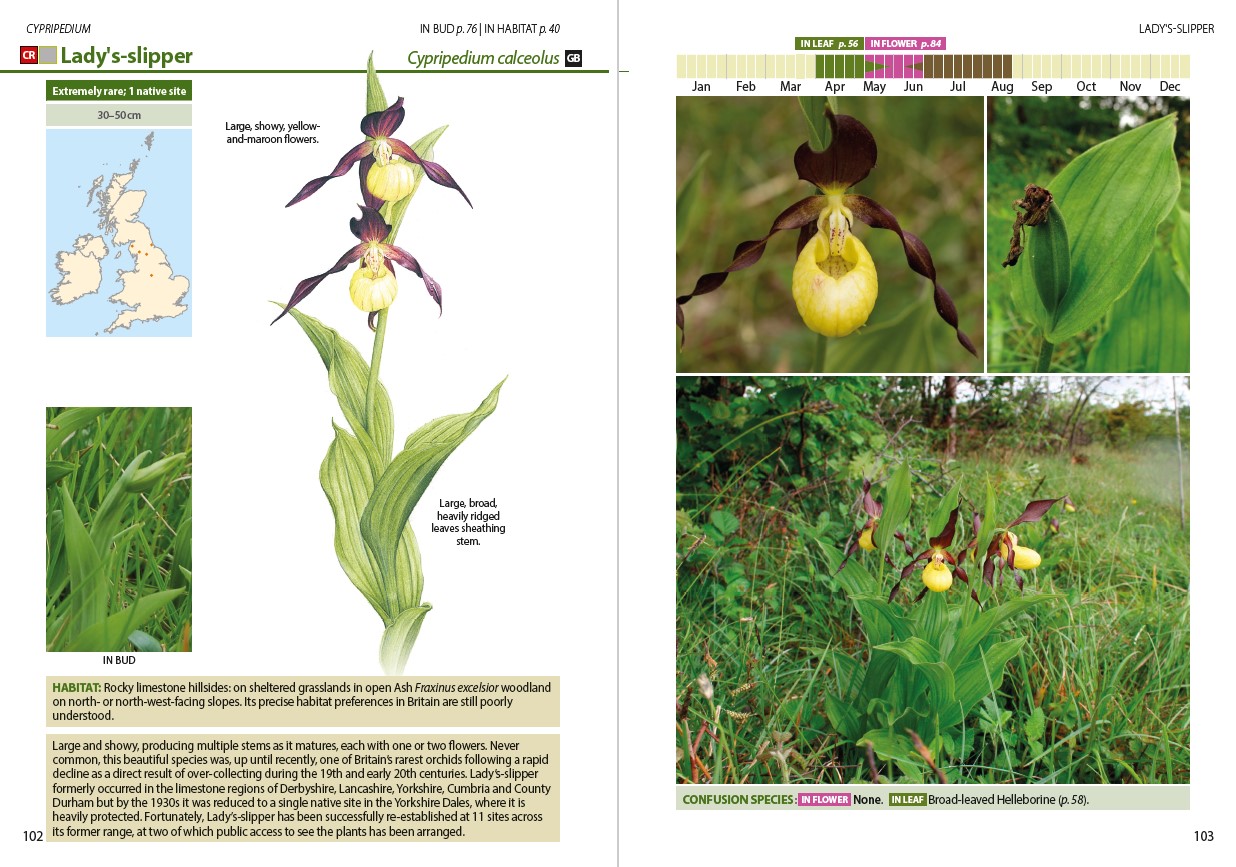 Orchids are well-known for their promiscuity, and it's good to see that the various hybrid combinations observed across Britain and Ireland are represented here. Some are more obvious, even to a layman such as myself, but the authors get stuck into the real minutiae in the more subtle cases – the shape of pollinia in butterfly orchid hybrids, for example. Furthermore, hybrid combinations are presented in rows of three photos, with the crossbreed nestled in the centre, flanked by images of parent species on each side. This sort of intrinsic detail, combined with the thought invested in presentation to convey key points, is what makes this book deserving of recognition as a new tome in its field, geared towards enthusiasts of all experiences and backgrounds.

I particularly enjoyed the enigmatic section at the rear of this book, which addresses extinct and adventive species. The mystery surrounding some of the transient appearances with species that may – or may not – have made it to our shores naturally makes for fascinating reading. It's also a great example of the combined knowledge of the two authors, highlighting their revered position in the field.

Finally, a reminder of the many threats that our orchids face comes right at the end – habitat loss, climate change and legal protection are all addressed, as is the ongoing threat of trampling and collection by man. In the 'Finding orchids' section at the fore of the book, a reminder of the Code of Conduct is boldly highlighted – it is, of course, down to us all to preserve orchids by exercising great care and respect when visiting protected and unprotected sites alike to pay homage to these beautiful yet delicate organisms.

This authoritative yet accessible guide is the result of many years' hard work from the authors. The multitude of information loaded into its texts are complimented by top-class illustrations and stunning photography. It is the new essential in its field and congratulations must go to Cole and Waller for producing what deserves to become a best-selling guide to this fascinating family.