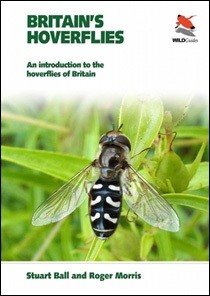 I suspect that I speak for a majority when I say that I've never previously found hoverflies to be the most appealing of insects. When the pace of birding is at its sleepiest in the summer months, I tend to turn towards Odonata, Lepidoptera or plant life to get my nature fix. When out in the field, I've always acknowledged the presence of hoverflies and consequently been aware that I've seen quite a few different species. Indeed, I've been on the coast on one of those late summer days when an invasion is underway and marvelled at the millions (billions?) of insects either zooming about the skies or carpeting the ground, exhausted. The problem is that I've never really known what I'm looking at — specifically, I mean — although it looks as if summer 2013 is about to change that for good...

Britain's Hoverflies is the latest instalment in WildGuides' very successful and educational Britain's Wildlife series. As with the previous publications, it follows a traditional species account format and is illustrated by photographs of superb quality. If, like me, you're a complete novice with hoverflies, the introduction is essential reading. Don't be put off by the unfamiliar anatomical names (which are explained fully in the glossary), for it is a wonderfully informative section of the book that lays out all the basics that you need to know before you start identifying hoverflies to species. Covered are biology, habitat, anatomy and flight seasons before a section on the key distinguishing features of each tribe (and mimics) is introduced — this section is essentially a perfectly ordered set of building blocks that prepares the prospective 'hoverflier'(?!) for the main species accounts.

I must say that I was a tad surprised (naïvely) to learn that 281 species of hoverfly have been recorded in the UK, with new species currently being discovered at a rate of one per year. From the outset, the book is keen to stress that it does not cover every species recorded for, like many micro-moths, some can only be identified with the aid of a microscope and a specimen — indeed, the book is billed on the front cover as 'An introduction to the hoverflies of Britain'. But it's rather better than a simple introduction — in fact it is quite complete, covering each of the 70 genera to occur in Britain and 165 of the commoner species that one is likely to find within our shores, giving the prospective reader more than enough material to go at and thus proving quite brilliant for the mere mortals of hoverfly identification such as me.

The species accounts are great: detailed enough to entertain the seasoned hoverfly enthusiasts and to act as an excellent and unrivalled reference, but simple enough to engage beginners such as myself — the 'Observation Tips' paragraph for each species, detailing typical habitat and often favoured plant foods, will come in very handy when attempting an identification. Using a red/orange/green colour scheme, the range maps are clear and are backed up by a graph depicting flight season.

As already alluded to, the photographs included in this publication are simply brilliant, and are a fine demonstration of just how much digital photography has progressed since the turn of the century. The only shortcoming is that judging the size of each species from a photograph is a little more difficult than it would be from, say, scaled illustrations. But, equally, such photographs open up so many possibilities with regards to the study of microscopic features on particularly challenging species pairs — take for example the comparison of the extent of the frons dusting in relation to the ocellar triangle in Helophilus hybridus and H. pendulus on page 206. Would this have been possible twenty years ago, before digital photography? I somehow doubt it.

When I first flicked through Britain's Hoverflies, I recognised quite a few species that I'd seen out in the field in summers gone by. Without wanting to sound clichéd, reviewing the book has genuinely inspired me to make more of an effort to pay closer attention to these characterful yet often underappreciated insects this coming summer. I anticipate that this will be a common theme among both birders and nature enthusiasts in general — Stuart Ball and Roger Morris have done a truly fine job of compiling a fantastic field guide that will at last make hoverflies the more accessible, popular and 'fashionable' subject that they deserve to be. This particular group of insects has been crying out for a modern and comprehensive field guide of high quality for years, and finally it is here. Go and buy it — it's essential!