Birds in the Holy Land: a Photographic Journey through Israel

The author of this exceptional photographic portfolio is not, as might be expected, an Israeli national. Berlin-based journalist and photographer Thomas Krumenacker first visited the country 12 years ago. This fired his passion and inspiration to return time and again to record the unique birdlife and dramatic differences in habitat and environment Israel has to offer.

With its medium-large 290x250 mm format, some might describe Birds in the Holy Land as a coffee-table book. It is much more than that, though. Krumenacker demonstrates a profound knowledge of Israel’s geology, geography and biodiversity, acquired through more than 30 extended photographic expeditions to this tiny Middle Eastern country.

The book reflects the dramatic changes in the landscape as it takes the reader on a journey through Israel from north to south, with special detail provided as the author dwells on key regions. These are the Hula Valley, Golan Heights, the Bet-Shean Valley, Judean and Negev Deserts and the Arava Valley, including Eilat.

Specific chapters focus on single species, migration and breeding birds, in which the consistently excellent standard of photography captures both birds and habitat, while drawing the reader into the mood and ambience of the environment.

The section on Common Cranes offers an exceptional insight into their wintering and migration patterns; it is superbly illustrated with stunningly lit, low-level images. To capture the aerial migration shots, Krumenacker took to the skies in a glider, and it almost feels like you are up there with the birds. In one, White Storks circle against a rich pastoral backcloth, framed by the snow-capped peaks of Mount Hermon.

The migration of Lesser Spotted Eagles merits a full chapter in which readers learn that almost 100 per cent of the entire global population passes through Israel within a very short period of time. Again, the accompanying photographs are fantastic.

The images from the single species studies are astonishingly intimate, with close-up portraits of Eastern Imperial Eagle, Griffon Vulture and Black Stork – only possible with extremely good camouflage – in the Jordan Valley. 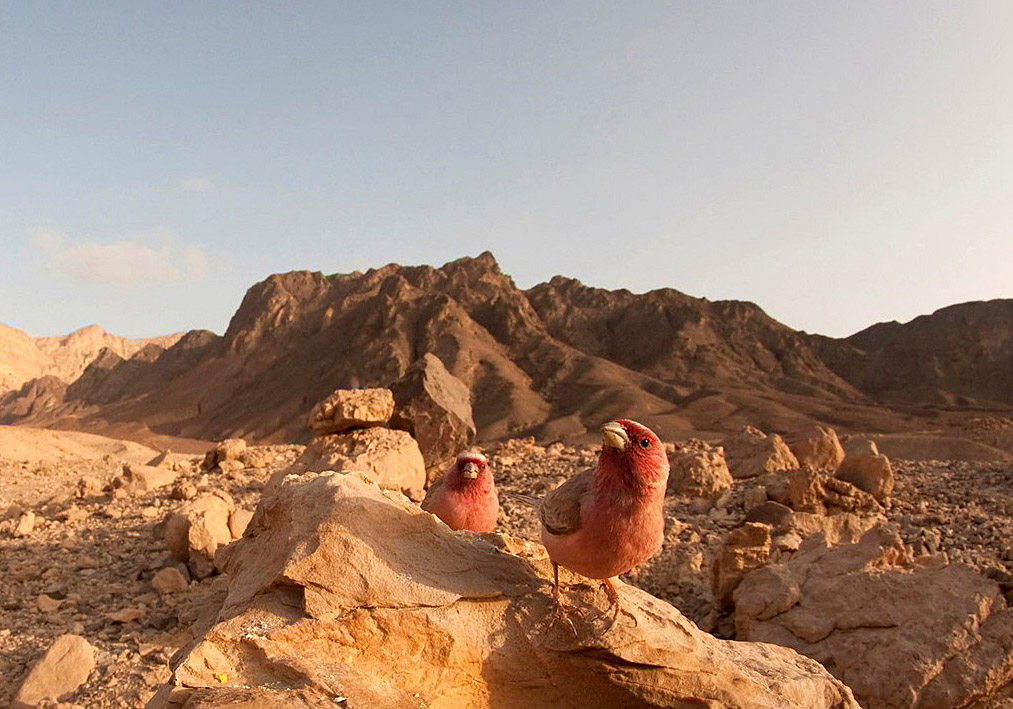 Thomas Krumenacher's novel shot of Sinai Rosefinch in Israel is typical of the dramatic images to be found in the pages of Birds of the Holy Land.

And so to the desert. Awesome barren landscapes, such as the grand rock desert of Wadi Zin lit by the low evening sun, provide dramatic backdrops for photographic studies of species which eke out an existence and appear to survive on next to nothing. Rich pink and red Sinai Rosefinches investigating a strategically placed remote camera produce enviable, inimitable results, while Sooty Falcons inhabiting remote canyons are captured as they survey the scene in the rocky wilderness. Also included are portraits of some of the mammals which inhabit the region, including Nubian Ibex and Arabian Wolf.

From migrating passerines in the Arava Valley to Greater Flamingos and waders in the lagoons in Eilat at the head of the Red Sea, this monumental photographic work covers it all in astonishing detail.

It is very easy to become totally absorbed by the stunning photography in this book which, it is hoped, may encourage those who see Israel as a country of conflict and crisis to take a fresh look from a new perspective on the Holy Land.