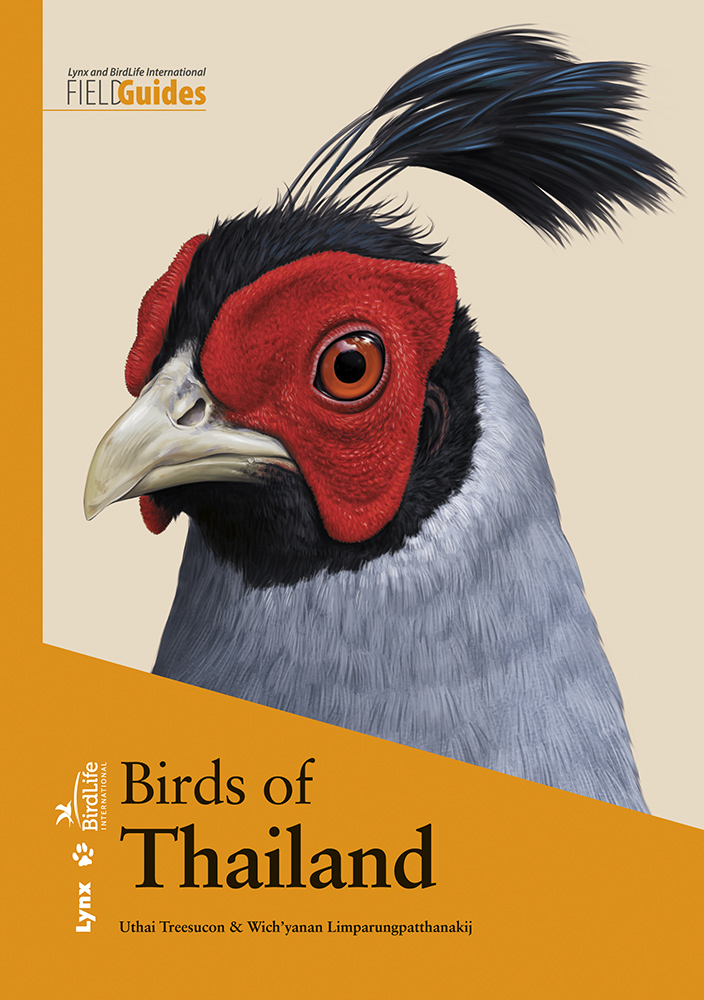 With an ever-increasing number of both resident and visiting birders, a growing national list, taxonomic changes and potential splits, this is a welcome and nicely timed field guide from the Lynx/BirdLife International team.

With its striking orange-and-white hardback cover featuring a dynamic Siamese Fireback staring out, it looks fresh. A general introduction is followed by geographical scope, climate and habitat types, while a section on the Bird Conservation Society of Thailand (BCST; BirdLife's partner in the country) and conservation within Thailand is most welcome. The Birding chapter, complete with a map of hot-spots, write ups of each of these and highlighting key species, is very useful.

Systematics and taxonomy follow the two volumes of Lynx's Handbook of the Birds of the World (HBW) and Birdlife International's Illustrated Checklist; those not familiar with that system will no doubt find a few surprises.

Species follow, with accounts on the left and plates on the right. The accounts themselves are concise and well written. They cover known subspecies occurring in Thailand, and with reference to potential future splits, there is a (sub)species account under the grouping of each taxon where relevant. These are also indicated on the range maps, which are placed beside the relevant illustration on the facing plate, making this very user friendly and easy on the eye.

There is a unique QR code for each species account which will take you through to the relevant page on the Internet Bird Collection and its archive of images, video and sound files. Perhaps not ideal in the field, but very useful for cross referencing.

The plates are generally very good, nicely laid out and don't feel cramped. Lynx has a wealth of material from HBW so you can expect consistency and a certain amount of familiarity with those illustrations. Breeding and non-breeding plumages are included where relevant, as are male and female, but only in a few groups are juveniles illustrated. Those which should be included in flight are generally illustrated, though I was surprised this excluded the hornbills.

I have one or two niggles. The Phylloscopus warblers, for example, where the default Thai leaf warbler, Yellow-browed Warbler, is tiny, as is Chinese Leaf Warbler, on a plate dominated by larger bulbuls. Layout constraints of course, but it's a shame those two aren't alongside their confusion species. The same could be said of Dusky Warbler, which is on a different plate from Radde's and Yellow-streaked Warblers.

There may only be one or two errors in a largely comprehensive and attractive addition to the Lynx catalogue, which I can highly recommend having used it in the field recently.