Vortex's Diamondback binocular range has recently entered another incarnation since its last update back in 2016. The latest generation has been designed with an emphasis on improving optical quality through the addition of HD glass, while retaining the previous enhancements from the last upgrade.

The range comprises 28, 32, 42, and 50 mm models, so I opted to compare the 32 mm and 42 mm models, both with 8x magnification. The first thing which is immediately striking is that at 445 g and 624 g respectively, both models are remarkably light in weight as a result of the magnesium alloy chassis. The dark green rubber armour is designed to be non-slip and to increase grip. It includes indented thumb-rests and stipple-textured body sides – the areas that are in contact with the basal parts of the user's fingers when these binoculars are being held. 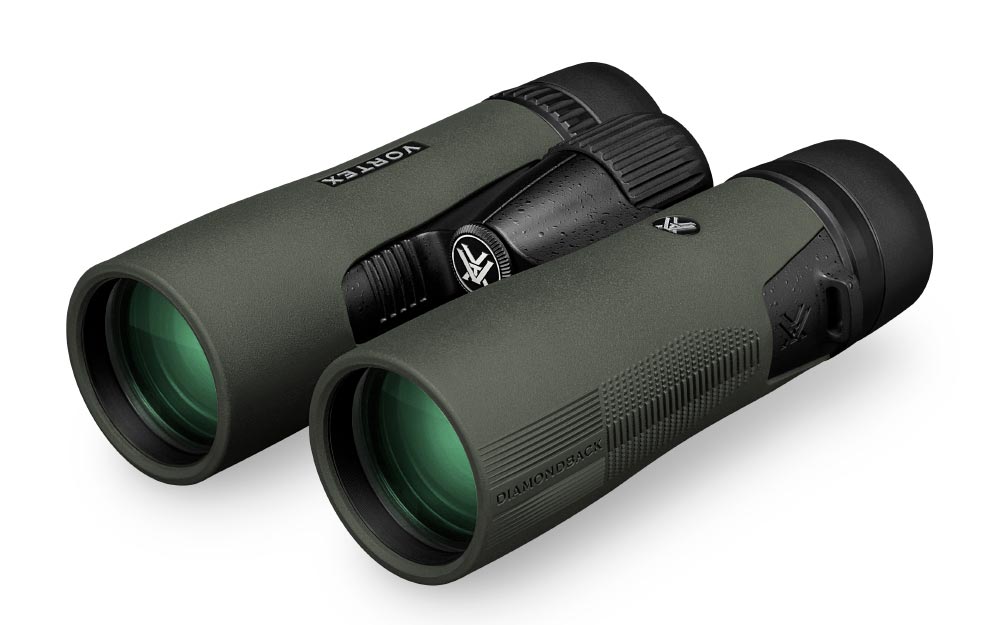 I found both models comfortable to hold and operate, although, because of their positioning, the strap lugs tend to press against the hand while using the focusing wheel. These are easy enough to manoeuvre around in the 8x42, but it is more difficult to avoid them in the 8x32, which is smaller and therefore restricts the positioning of the user's hands.

The hinge on both models appears quite stiff; I view this as an advantage insomuch as the interpupillary distance is not easily knocked out of alignment once set.

The eyecups in both models click-stop in two different positions above the base setting and I was pleased to be able to see the full field of view, irrespective of their extension. Adjustment for independent single-eye focusing is via a milled ring on the right ocular and, although it is not securable, it didn't move after being set.

In terms of focusing, the amply-sized central wheel turns very smoothly in both models. The close-focusing distance on the 8x32 was approximately as listed, while that of the 42 mm model was about 0.6 m longer than the 1.52 m quoted in the specification.

In the 8x32, a fraction over 1.25 anticlockwise turns went from close focus to infinity, while the same is achieved in just over 1.5 turns in the 42 mm model. In each case, however, only a very small fraction of a turn takes focusing from approximately 10 m to long distance, meaning that both these models really do have the advantage of fast focusing associated with them. This is very useful when quickly switching from watching a bird at close range to picking up one flying over at long range, or vice versa. 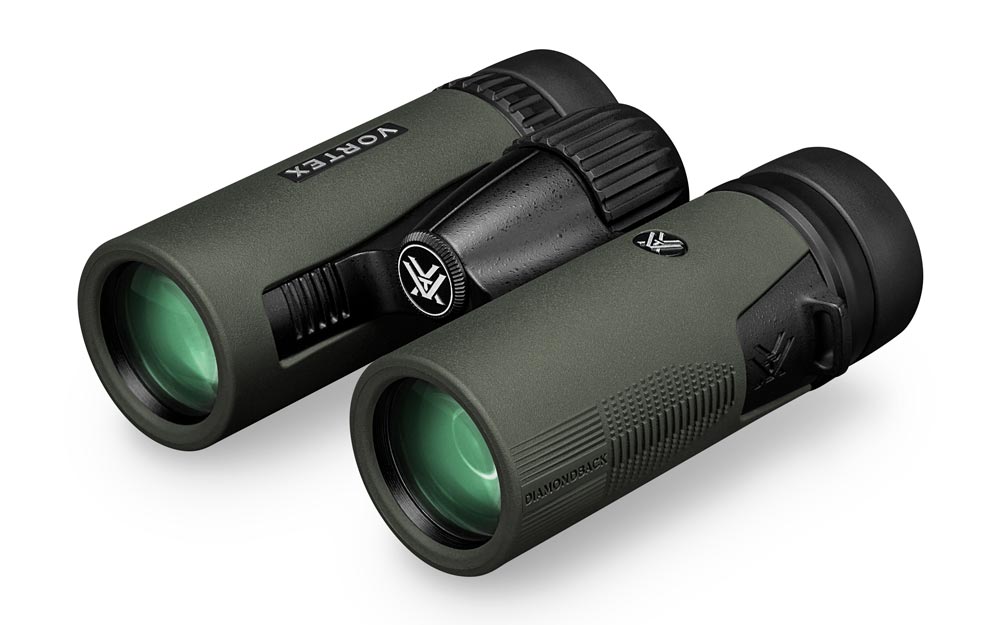 The image produced by the larger model is the brighter of the two because of the greater diameter of the objective lens, although the difference is slight. Both models have an appreciable amount of chromatic aberration, or colour-fringing, although this is more evident when subjects are viewed against a bright, backlit background. The image is nice, bright and 'contrasty' in both models and in each case reflects natural, true-to-life colours, while the overall colour rendition is cold.

I was pleased to discover a very nice 3D effect, which was particularly evident when using the binoculars in woodland. Sharpness is retained almost to the very edge of the field, where there is a slight curvature, but this not noticeable under normal viewing conditions.

The 8x42 comes with a 'Glasspak' soft, protective case and harness strap so that it can be used with the case while the latter is strapped to the observer. This model also has a padded comfort neck strap, as it is larger and heavier compared with its smaller sibling. The moulded case on the 8x32 is firm but pliable, and isn't designed to be worn with the binocular; the neck strap is a fairly basic lanyard.

Both models are supplied with an articulated rainguard and removable tethered objective covers. Priced at £219 and £239 for the 8x32 and the 8x42, respectively, these models represent very good value and should be factored into any buying consideration for binoculars at the lower end of the market.

+ Image is nice, bright and 'contrasty'
+ Sharpness retained almost to the edge of field
- Both models have an appreciable amount of chromatic aberration