Viking Optical, formerly Charles Frank, is enjoying its 32nd year of operating in the British optics market and appears to be going from strength to strength. Maintaining pace with the demand for affordable, quality optics, the company is not short on ideas for keeping its product range fresh and up to date.

Launched in February, the Peregrine is set to replace the existing ED Pro as the new flagship binocular. There are currently two models, 8x42 and 10x42, with an 8x32 to be available later this year. Grabbing some quality time with one of the first 8x42s, I got stuck into some chilly winter birding around a few of my favourite sites in the Midlands. 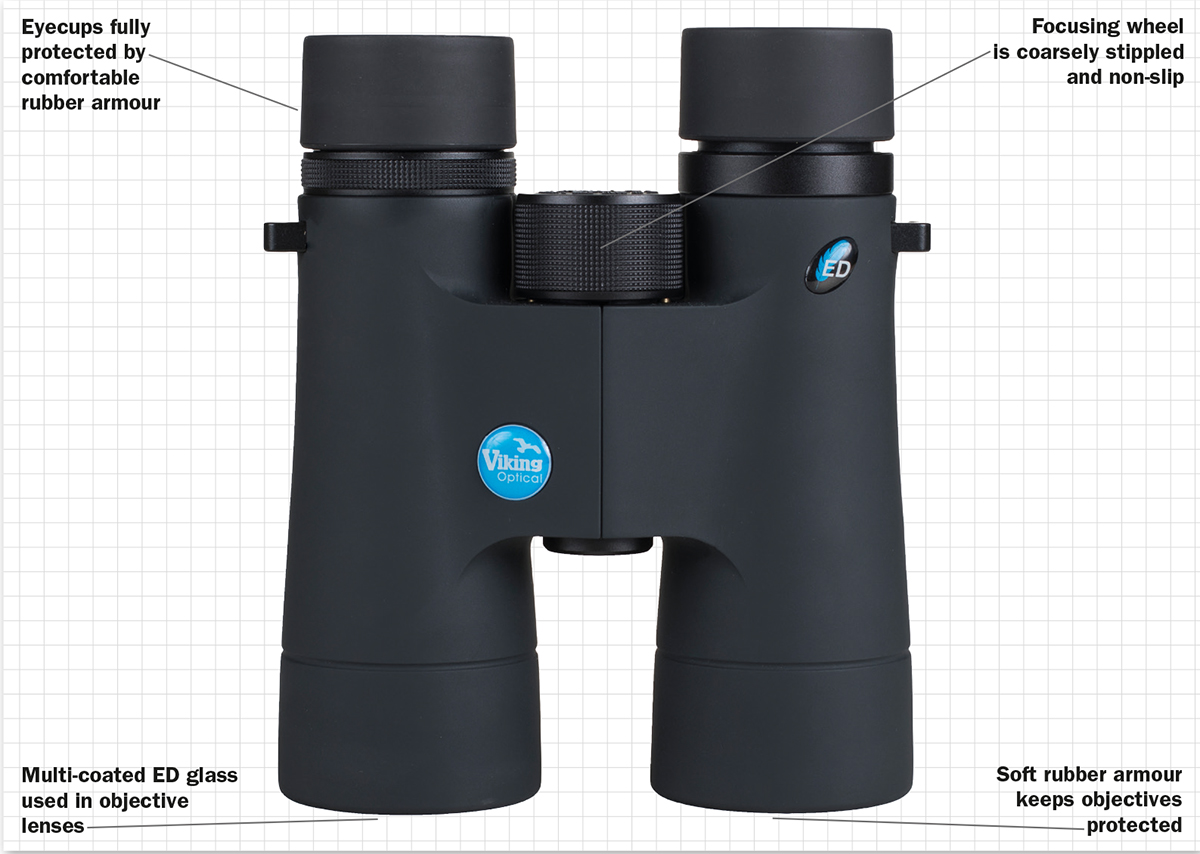 The first thing noticeable about this binocular is the smooth, sleek appearance: a charcoal rubber-covered chassis, badged with the company’s blue-and-white logo and a glossy raised ED moniker below the left ocular. Despite its smoothness, the rubber still offers plenty of grip – even when wearing gloves. The thumb-rests are somewhat subtle and probably contribute little to facilitating holding. The soft rubber covering wraps neatly around the objectives, providing more than adequate protection from knocks.

Removable, tethered objective covers, matching the body armour, sit neatly and firmly in place and don’t show any signs of becoming detached in the field. The same rubber covering is found on the twist-out eyecups. Extending to three positively click-locking positions above the base setting, these sport a generous depth of soft, springy, protective rubber, which I found very comfortable against the eye. I was pleased to be able to still see the full field of view when the eyecups were pulled out to their maximum.

Both the single-eye adjustment ring below the right ocular and the centrally located, finger-width focus wheel have the same coarsely stippled, non-slip metallic surface, which is easily operated, even with gloves on. The turning operation of the focus wheel is very smooth, with little more than 1.25 clockwise rotations taking the image from close focus to infinity.

At 600 g, the Peregrine feels quite light and, to me, perfectly balanced. I like the overall design, down to the high ‘viscosity’ of the hinge, which ensures that, once the interpupillary distance is correctly adjusted, it is not easily moved from its setting.

The optical system employs ED glass in the objective lens construction and the system is fully multi-coated. You wouldn’t expect anything less than the dielectric-coated, phase-corrected BAK4 prism system in this model, and the full complement of internal optics produces a pleasing image.

A certain depth and richness of colour is evident from the outset, along with an overall warmth to the image, without any yellow tones. Contrast is also good, and when using the Peregrine just prior to dusk none of this was really lost and the image remained acceptably bright.

The image was not sharp to the very edge of the field, but any distortion produced by curvature was negligible. Colour fringing is noticeable in the outer two-thirds of the field, but not at a level to cause major concern. Typical viewing of Ravens against an overcast, though bright, sky and watching wildfowl against a reflective water surface were two instances in which this relatively low level of chromatic aberration was most apparent.

The Peregrine appears to represent good value. It weighs little more than 70 per cent of the ED Pro, and is considerably less expensive, although it is not an open-bridge model. It comes with an articulated rainguard, a comfortable padded neck strap and a soft carry case.