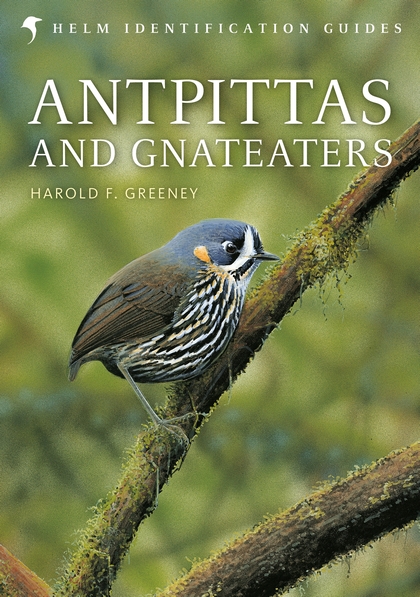 Most birders will agree when I say that antpittas must rank among the top avian families to inhabit this planet. Their comical combination of long, robust legs, a dumpy, round body, tail-less impression and huge, staring eyes instantly makes them eye-catching. That many are adorned with some of the most beautiful (if often subtle) plumages to be found on any bird only adds to their appeal, as does their generally bold, intelligent and charismatic personalities, which has led to many individuals becoming habituated at various reserves and lodges throughout the Neotropics – which in turn has so often made them a highlight of a trip to this part of the world.

It was with great anticipation, then, that I first heard about Harold F Greeney's Antpittas and Gnateaters – a new addition to the Helm Identification Guides series – in 2018. And, having spent quite some time studying this book, it's most definitely a fitting tribute to its esteemed subject.

Adorning the front cover is an illustration of arguably the most beautiful of all the family – a Crescent-faced Antpitta, which up until recently was a bird only really gettable with considerable effort at a few sites in Ecuador, but is now also being readily fed at a lodge in central Colombia. Having spent several hours standing in the rain at a site in Colombia listening to a Crescent-faced which simply refused to show itself, I can certainly say I had mixed emotions when I first cast an eye upon it!

This is a real tome to the family, weighing in at almost 500 pages in length and possessing almost 250 colour photographs depicting the 156 recognised taxa. It takes a on familiar layout similar to other titles in this long-running Helm series: a detailed introduction is followed by the plates, after which come the species accounts.

The quality of the illustrations is generally good to very good – which is a relief, as sometimes in these impressive books with high price tags, you find that the artistry is somewhat lacking. Plates are clean and uncluttered, generally dealing with one to three species on each, but sometimes up to five. These show birds in a range of plumages – sometimes simply adult and juvenile, for many species lack sexual dimorphism, but usually illustrating the subtle differences between recognised subspecies – there are, for example, six illustrations showing the various incarnations of Ochre-breasted Antpitta and nine for (as it is treated here) Rufous Antpitta, which more likely comprises several different species rather than the seven subspecies recognised here.

The literature itself is, overall, hugely impressive. Greeney's knowledge on this family is quite astonishing and the cumulation of his years of study is laid out here to see. Each species account commences with a short introduction and is followed by sub-sections on identification, distribution, habitat, voice, reproduction, taxonomy, conservation status and others. Most species are illustrated by at least a couple of high-quality colour images, showing both adults and juveniles, as well as in some cases nests and eggs. The range of each is also visually represented by a distribution map.

Overall, this is a phenomenally researched book and is the fruit of a dedicated professional life to this most wonderful of families. The overall production makes it a true collector's item and a volume that should sit proudly on any bookshelf. For all those that have had the fortune to encounter an antpitta somewhere on their travels, this book will certainly bring back some fond memories. For those that haven't, it will no doubt serve as inspiration to one day set sights on a member of this extraordinary group of birds.