This comprehensive app claims to be a complete field guide to all bird species recorded in Britain and Northern Ireland, but in fact it mirrors the British Ornithologists’ Union’s list – some 591 species - and excludes Fox Sparrow (recorded only in Co Down). This is many more species than in other apps I’ve used, which have generally included only the most regular birds. 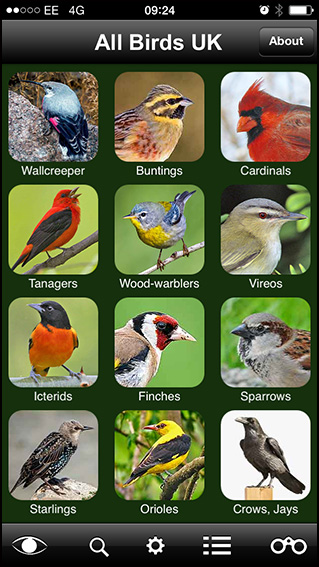 All this information can be displayed in three ways: alphabetically by name – English, German or scientific – a gallery view or by group. You can also choose to hide the rarest vagrants, which are separated from the others in the lists by their red – rather than green – background. The species accounts include taxonomic data, a description, size, habitat and distribution, abundance and breeding status. There is also a list of similar species.

There is at least one high-resolution photo for each species and most have more than this. You can tap on a photo and then use finger and thumb to blow it up for a closer look. Where relevant, different plumages are pictured, but the photos aren’t captioned so anyone unfamiliar with these won’t necessarily know what they’re looking at. There are also calls and songs for each species. The descriptions are accurate and up to date, but they have been translated from German and sometimes the translation is rather odd – Blackbird has been translated as Merl – and some spellings and grammar are wrong – taxonomy is spelt with an ‘ie’ at the end. The occasional German word has not been translated.

There is an option to log the birds you’ve seen. Once you’ve identified the species, tap the star and you can record number seen, time and location. This last is set by your GPS co-ordinates and you can’t change it, so unless you do it at the moment you see the bird the location will be wrong. Time and date, however, can be changed. You can also add your own notes. 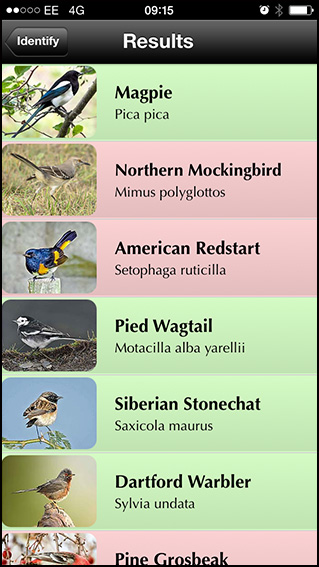 The ‘identify’ facility is where things start to go a bit wrong. If you can’t find your bird in the species list, you tap the eye icon to try to identify it using simple terms such as beak size and length, tail length and colour. The problem is that many of these are subjective and dependent on the bird. A Pied Wagtail has a long tail, as does a Magpie, but the latter’s is obviously much longer than the former’s. Size of the bird isn’t one of the key terms.

I did this with the aim of getting Pied Wagtail. The results of my search also included Red-breasted Goose, Sanderling and American Redstart.

Overall this is an easy-to-use app with a lot of information. Used simply as field guide, it provides what you need to identify pretty much anything while out birding. However, the listing and identify options are of limited use. The high price might also be a bit off-putting.