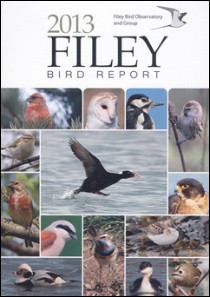 In recent years we've seen a number of local and county bird clubs commit varying degrees of effort to modernising their annual reports. Though there isn't anything inherently wrong with the 'traditional' style of county bird report, evolution is widely recognised as a positive — providing that it is executed well. And so, having heard of a planned overhaul, I was naturally keen to delve into the 2013 Filey Bird Report when it arrived on my desk. Yorkshire is a blessed county: not only does it boast some fine birding locations and consequently many great birds, but it also produces an excellent quality of annual reports, both for individual sites (such as Flamborough) and the county as a whole. I was eager to see how FBOG's offering compared.

When reading through county reports, a predictable layout and list of content creates a very familiar and recognisable entity. This is fine, if a little stuffy, and while I'm certainly not of the opinion that anything drastic needs to be done on a widespread scale, it's always nice to see local bird clubs inject fresh thought and enthusiasm into the work they produce. A cursory glance through the Filey Bird Report suggests that that is certainly the case here. Sure, the species accounts follow a familiar pattern (and read well), but it's the overall layout and additional content that really make it stand out from the rest.

The design is visually appealing. It looks the part: professional and evidently co-ordinated by someone who knows about graphics. The increased size of the report gives it greater breathing space — it's far from cluttered; certainly not stuffy. Introductions from Sue Hull, George Watola and Mark James Pearson give it a positive, personal touch and set the tone as warm and welcoming with a refreshing whiff of informality. It feels communal, and not in the slightest bit cliquey.

The entire publication is awash with images — photos, not just of birds but of other wildlife and the fine landscapes that the Filey coastline has to offer; and illustrations by Colin Wilkinson, my favourite of which is a colour representation of the drake Surf Scoter that spent a week or so off the Brigg in early summer.

There are a number of familiar features in this report: an annual review of the year's highlights, the species accounts, photo gallery (imaginatively branded 'Birds in Profile'), early and late dates of common migrants and a ringing review. In addition, there are a series of 'bonus' features including 'A year at Filey': an articles section including well-written accounts on rarities such as Black-headed Wagtail, Brünnich's Guillemot and multiple Dusky Warblers, an invasion of Yellow-browed Warblers and the area's spectacular summer of cetaceans. There are also individual sections dedicated to plant, butterfly, dragonfly and mammal sightings in 2013, again each decorated with beautiful locally taken photographs and qualifying this as more than a simple bird report.

The effort that has gone into producing this report is clear to see. But the resulting publication does not reek of toil; instead it appears to have been written and produced with a strong sense of passion and pride. And rightly so — reading the report (or even just glancing at the cover!) makes it very clear that Filey is a fine little corner of Britain in which to live if you love wildlife.

The 2013 Filey Bird Report is a well-produced, contemporary rendering of the traditional annual bird report, written and designed in both thoughtful and intricate manner. Its informal yet informative style with extensive images makes for a publication that can be appreciated by a broad spectrum of society. The evolution of the annual bird report has taken a refreshing step forward here and, to answer Sue Hull's opening line ["we hope you like the new format..."]: yes, I most certainly do!

The 2013 Filey Bird Report is available to purchase from FBOG for £8 (plus £2 p&p). See here for more details.