The remains of a young female Hen Harrier have been found in an illegally set spring trap on a grouse moor in Perthshire, Scotland. The bird – named Rannoch – was satellite-tagged, with her body discovered having been caught in a trap that had been set in the open, which is against the law.

Rannoch was satellite-tagged by RSPB's Hen Harrier LIFE project in July 2017. Her tag data was followed by RSPB Scotland until 10 November 2018, when she stopped moving in an area of moorland between Aberfeldy and Crieff. The solar powered tag battery drained before accurate location data could be gathered allowing her to be found, but after coming online again in May 2019, enough information was provided to locate her remains. 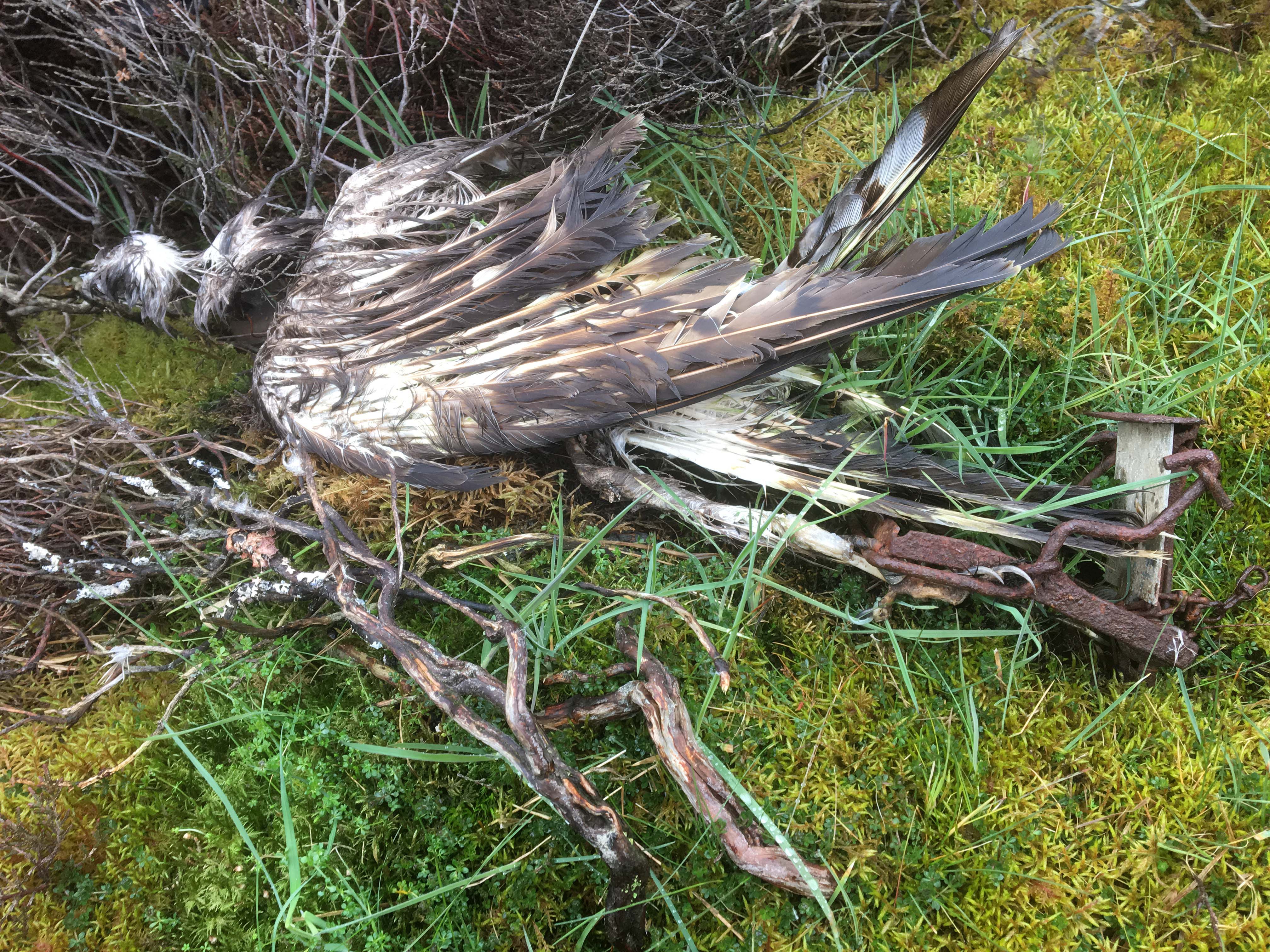 The body of Rannoch was found months after she disappeared (RSPB).

The post-mortem report concluded that: "The bird was trapped by the left leg in a spring trap at time of death. Death will have been due to a combination of shock and blood loss if it died quickly or to exposure and dehydration/starvation if it died slowly. Either way the bird will have experienced significant and unnecessary suffering."

Dr Cathleen Thomas, Project Manager for the RSPB's Hen Harrier LIFE project, said: "We are absolutely devastated that Rannoch has been a victim of crime; the life of this beautiful bird was cut short in the most horrific way due to human actions. Satellite tagging has revealed the amazing journeys made by Hen Harriers but also uncovers how their journeys end.

"Often the birds disappear with their tags suddenly ceasing to function as perpetrators go to great lengths to hide the evidence of their crimes; Rannoch's death in a spring trap is evidence of one way in which these birds are being killed. In terms of their population size, Hen Harriers are the most persecuted bird of prey in the UK, and their population is now perilously low, so every loss we suffer impacts the continued survival of the species."

Ian Thomson, Head of Investigations Scotland, added: "This latest killing of a Hen Harrier is truly appalling. The actions of the individual who set this trap were both reckless and indiscriminate, and showed a complete disregard for both the law and the welfare of local wildlife. Sadly, the catalogue of criminal killing of tagged Hen Harriers and other birds of prey continues unabated; we know many others are illegally killed and going undetected, so her death is part of the tip of the iceberg of the true level of criminality."

Rannoch was one of two chicks who fledged from a Perthshire nest in an area owned and managed by Forestry and Land Scotland in July 2017. Her tag data showed that she spent most of her time in Perthshire, before she stopped moving on 10 November 2018. When RSPB Scotland found Rannoch, her leg was caught in a spring trap. 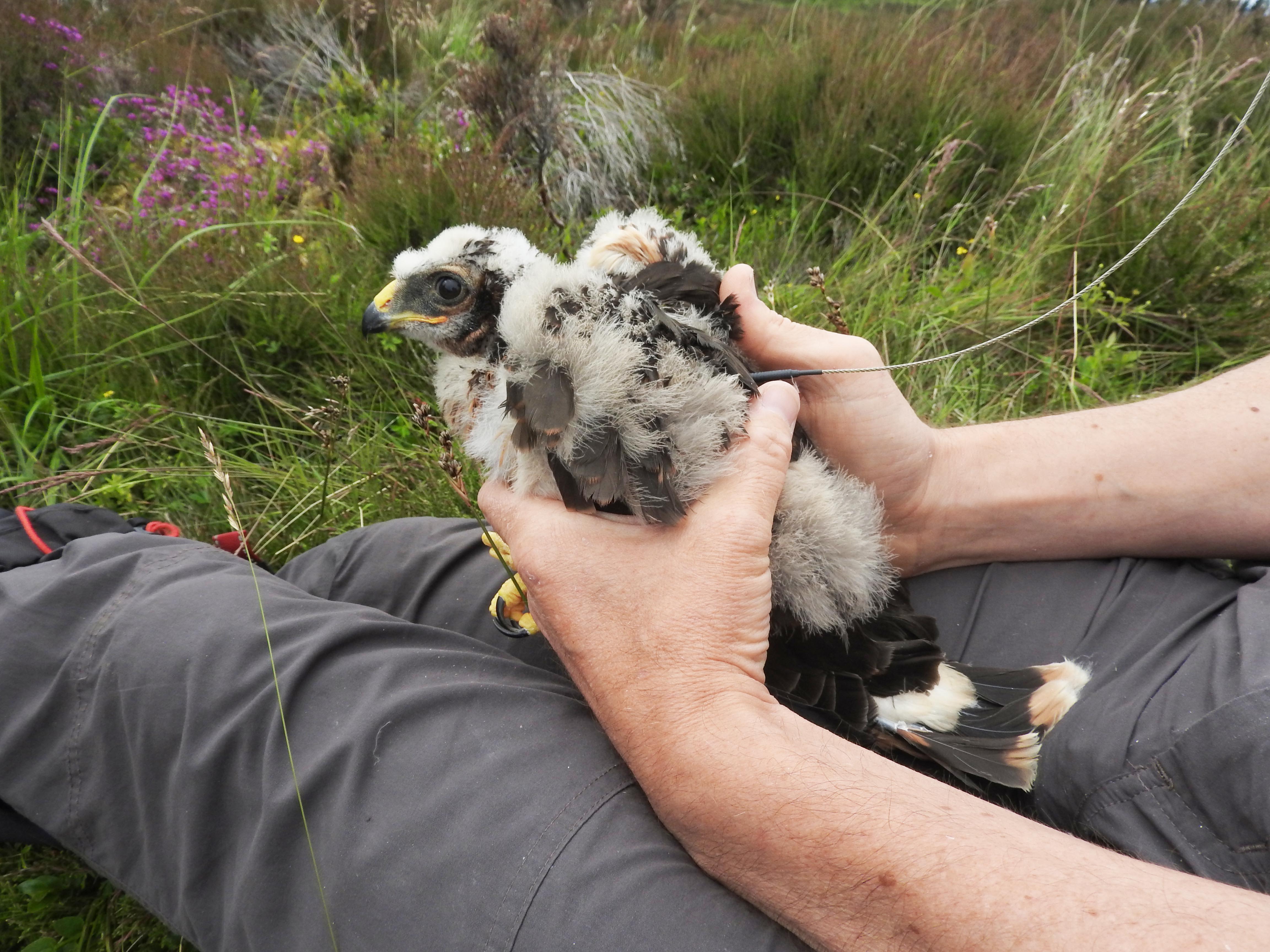 The young Hen Harrier was one of two chicks to fledge in the summer of 2017 (RSPB).

Logan Steele, a member of the Tayside Raptor Study Group, said: "Rannoch and her sibling were the first birds to fledge from this site in 10 years, so I was very angry to hear she had died caught in an illegal trap. With so few Hen Harriers left in this part of Perthshire it is particularly worrying that this bird will not return to breed."

Anyone with information about this crime or other bird of prey illegal persecution is urged to contact Police Scotland on 101, or the RSPB's confidential raptor crime hotline on 0300 999 0101.