Yellow-breasted Bunting at risk of extinction

BirdLife International is pushing an action plan to save the Endangered Yellow-breasted Bunting, after unchecked hunting has pushed it to the verge of extinction in the space of just three decades.

In the mid-1990s, the observed decline of Yellow-breasted Bunting in Hokkaido, Japan, alerted conservationists that this superabundant species might be in trouble. It has suffered a huge decline, possibly as much as 95 per cent of its population, in the span of just two to three decades. Prior to 2004, this attractive seed-eater was not regarded as of conservation concern, but since 2013 it has been listed as Endangered and this year the discussion on BirdLife’s Globally Threatened Birds Forum concerned a potential further uplisting to Critically Endangered.

The species migrates in huge flocks which are hunted in massive numbers, and its plight has been worsened by improvements in communication and transportation. The species gathers in large numbers at night to roost, making the birds easy to trap in high numbers. It is known as ‘Rice Bird’ in China, where it is hunted for food; this practice has been illegal since 1997 but continues on the black market to this day. 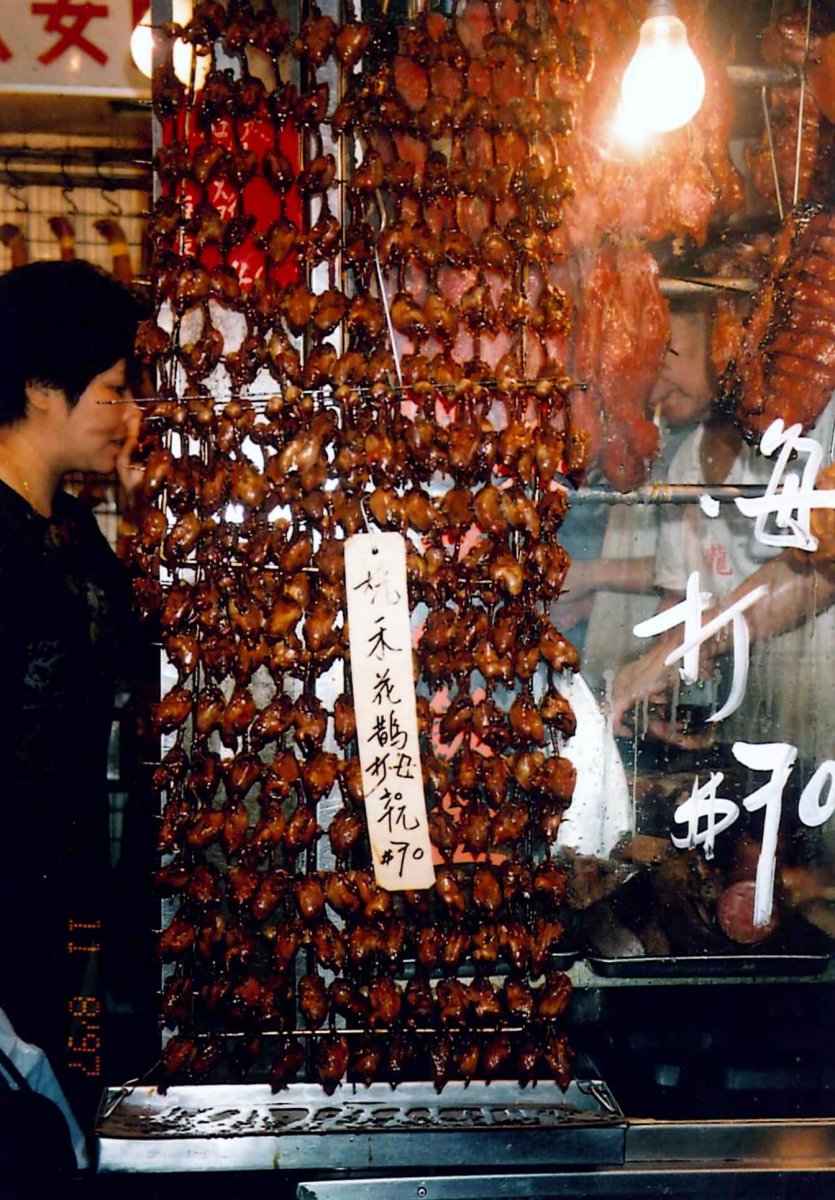 Yellow-breasted Bunting is known as the 'Rice Bird' in China, and has been caught in huge quantities for eating. Photo: BirdLife International.

Such unsustainable and mostly illegal hunting of migratory passerines in Asia has not only pushed Yellow-breasted Bunting to the edge of extinction, but according to preliminary monitoring projects performed in the Amur Region of Russia and Hong Kong SAR, China, all migratory bunting species in eastern Asia are declining.

In order to address and confront this little-known crisis, BirdLife co-organised an international workshop on the conservation of Yellow-breasted Bunting with the Hong Kong Bird Watching Society (HKBWS) and the Sun Yat-sen University in Guangzhou, China, in November 2016. The purpose of the workshop was to collect information and opinion for drafting an International Conservation Action Plan on Yellow-breasted Bunting, and to form an international conservation network on this and other migratory passerines.

More than 50 experts from almost all major range countries attended the workshop. The main recommendations were that Yellow-breasted Bunting should be officially protected in all range countries, that its migration patterns should be managed using colour banding and geolocators, and that its breeding, migration and wintering sites need to be identified, surveyed, protected and managed. It is also imperative to study the effect of agricultural chemicals on migratory passerines that use farmland, and to promote wildlife-friendly farming practices. International co-operation on the research and conservation of migratory passerines is necessary if numbers of Asia’s vanishing migrants are to be stabilised. The International Conservation Action Plan of Yellow-breasted Bunting is expected to be published by 2019, after consultation with different countries and stakeholders.

However, important actions are already underway. In the 2016 breeding season, BirdLife and Birds Russia conducted a preliminary study on the Yellow-breasted Bunting in Sakhalin, Russia. The result was alarming: it seems to have disappeared completely from southern Sakhalin and could only found at a few localities in northern and central parts of the island.

A joint team from BirdLife, Wild Bird Society of Japan and Birds Russia visited northern Sakhalin and colour-banded 18 Yellow-breasted Buntings so that its migration could be studied. Geolocators will be used in the breeding season of 2018 if the banded birds have shown they are returning to the same breeding sites.

This year, China has made a very positive move by enforcing a revised wildlife conservation law, outlawing the eating of protected species, which include Yellow-breasted Bunting. The key to success is higher awareness among the general public so they will refuse to buy the birds and report any illegal activities seen.

BirdLife International and HKBWS have produced a poster to support implementation of the new conservation law. BirdLife Partners will also support an education programme on prevention of hunting and wildlife consumption in all other countries in the bunting’s range, as the fight continues to ensure that it doesn’t become another cautionary tale for future generations. 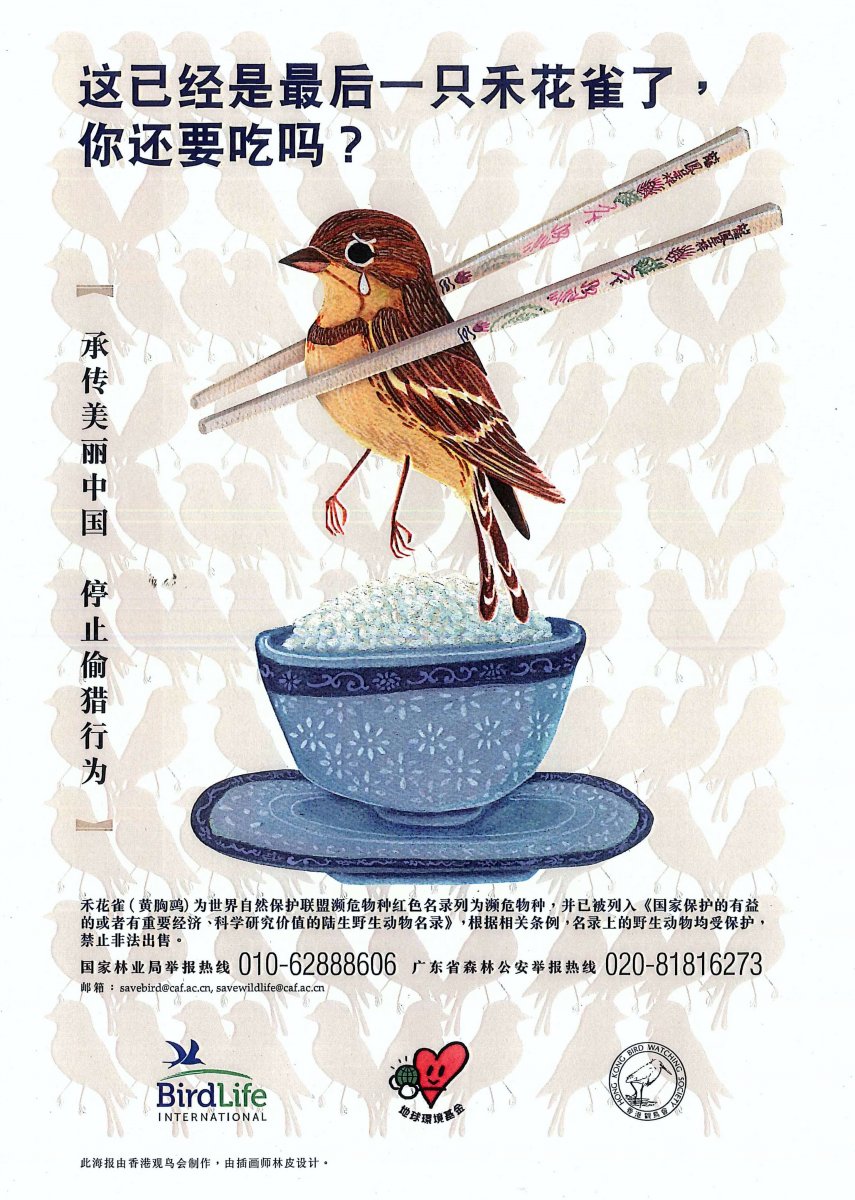 The Yellow-breasted Bunting poster which BirdLife are using to increase awareness of the bird's plight. Image: BirdLife International.