Common Crane has successfully bred at Welney Wetland Centre WWT, Norfolk, for the first time ever. This scarce species can be shy and secretive during the breeding season, making it difficult to monitor despite its size. However, the Wildfowl and Wetlands Trust (WWT) has confirmed that two chicks arrived on 21 March.

The baby birds are just 15 cm tall when they hatch, but are quickly able to walk, swim and run. Over the next 10 weeks both parents will protect the vulnerable chicks from predation and teach them how to find the food they need to grow and survive.

Leigh Marshall, Centre Manager, said: “The area of wetlands that the cranes have chosen to nest in is less than 10 years old and was previously arable farmland. The development of this habitat was specifically for wet springs such as the one we have experienced this year, when the Ouse Washes are storing water to protect the surrounding land and communities.

“This most recent breeding success is adding to an increasingly impressive list of species which includes Black-winged Stilt and Black-tailed Godwit.”

The female and male both take an active role in the incubation process, sharing the responsibility of brooding the eggs and swapping over every couple of hours.

Warden Hetty Grant added: “The cranes have done well to protect the eggs from the cold, wet weather we have had this spring. Staff and volunteers monitored the cranes and their nest, which meant we could glean insight into some of their most secret behaviours, ensure that they weren’t disturbed and react quickly to prevent the nest from flooding.”

In recent years, crane sightings have become more regular at Welney WWT as the Fens population has increased and started to expand across the region. A few dozen pairs already nest in Norfolk each year, after the species naturally recolonised and, atypically, became resident rather than migratory in 1981. Up to 30 cranes gathered in a post-breeding flock last autumn, feeding on the Ouse Washes right in front of the hides. This may mean that the family group will stay close to the wetlands at Welney, even after the chicks have fledged. 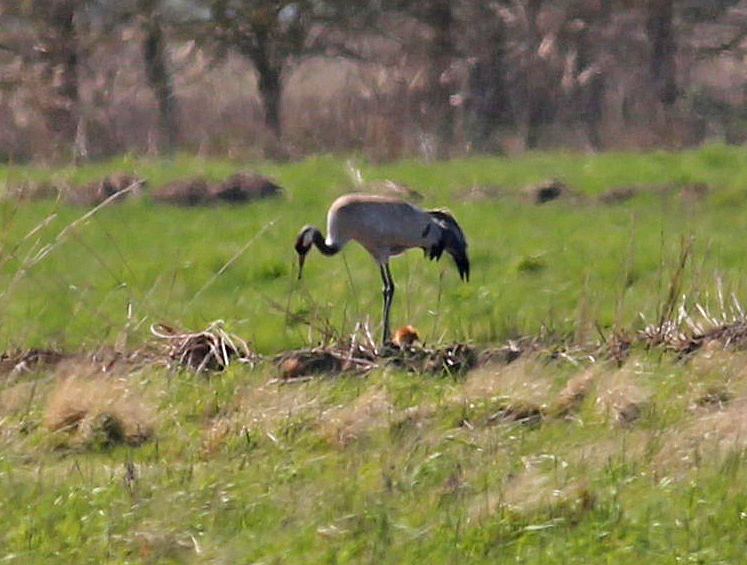 The cranes and their chick are currently showing distantly at Welney WWT (Mark Hughes).