Woman 'so lucky' after swan crashes through bathroom window

A Mute Swan smashed through a double-glazed bathroom window last week, moments after an elderly woman left the room.

The woman had been at the sink in front of the window just before the bird crashed in at a home in Barton in Fabis, Nottinghamshire, on Monday 11 January. The swan received stitches to a wound under her wing and is awaiting further treatment. 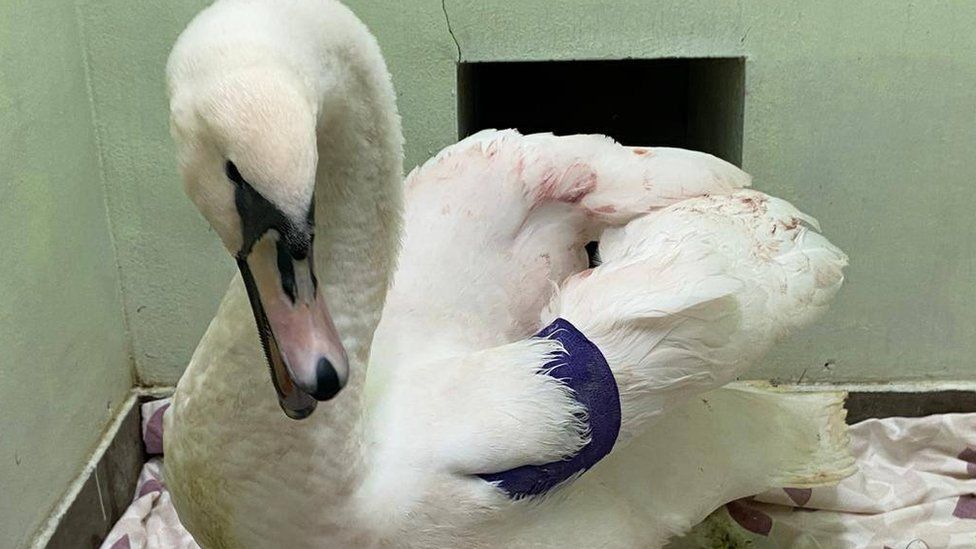 The Mute Swan that crashed through a bathroom window in Nottinghamshire (RSPCA).

RSPCA inspector Keith Ellis said he had never seen anything like the "bizarre" incident in his 40-year career. The swan ended up "cut and dazed" on the floor in the chalet home, the RSPCA said.

A neighbour, who heard the commotion at about 8 am, went to help and contacted the charity. Mr Ellis, who collected the injured swan, said the woman had been "so lucky" she left the room when she did. He said: "Had she still been there when this swan crashed through the window, I am sure the glass shattering and the impact of the bird hitting her would have caused serious injury – or even worse."

He suspects the swan was flying to the nearby River Trent and misjudged the direction or was blown off course in strong winds. "I have been an RSPCA inspector for 40 years and have never seen a swan crash through a window," he said. "I have seen them crash-land on to busy roads thinking they are rivers – but nothing like this – it is so bizarre."

The swan was taken for emergency treatment and spent more than an hour in surgery. She was then transferred to an RSPCA centre near Nantwich, Cheshire, where she will be treated "until she is healthy enough to be released back into the wild".