A White-tailed Eagle found injured on moorland on Lewis is likely to have collided with a nearby wind turbine, an animal welfare charity has said.

The bird of prey was discovered with a "serious head injury and being eaten alive" by biting midges on 10 August on the Hebridean island. An X-ray at a local veterinary surgery revealed the eagle had severe bruising to its body as well as head trauma. 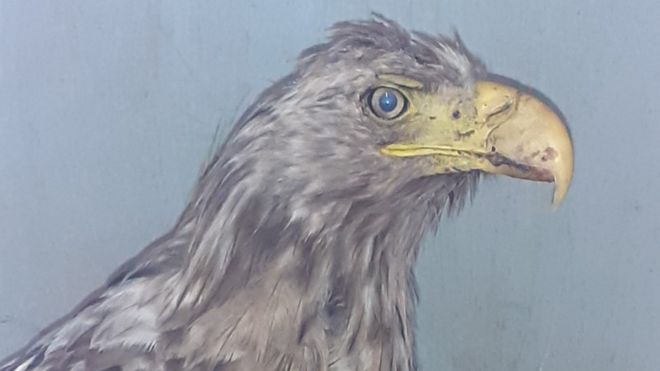 The White-tailed Eagle that is thought to have collided with a wind turbine on Lewis (SPCA).

The Scottish SPCA is looking after the bird and hopes to release it back into the wild once it recovers. A leg ring and satellite tag fitted to the eagle by RSPB Scotland showed it had hatched at a nest on Lewis in June 2009.

Scottish SPCA auxiliary inspector, Maggie Adkins, said: "It was found in a remote part of the island close to a large wind turbine so this is likely to have been the cause of its injuries. After an X-ray, thankfully no breakages were found but the bird had severe bruising to the body as well as head trauma."

Policy manager Stephanie Conesa said: "The renewable energy industry is working closely with bodies including the Scottish government, Scottish Natural Heritage, the RSPB and others through the Scottish Windfarm Bird Steering Group to better understand bird behaviour and make sure that wind developments are sensitive to bird populations.

"Wind energy is one of the key technologies we are able to deploy at scale to reduce the carbon emissions which cause climate change, the greatest long-term threat to Scotland's wildlife."