A tragic swan romance has taken a happy turn as a pair of Icelandic Whooper Swans, hampered by injury, has hatched a healthy brood of cygnets at WWT Welney Wetland Centre, 1,800 kilometres from their usual breeding grounds. Whooper Swans pair for life, but a pair dubbed Romeo and Julietta has surprised experts with a startling act of devotion. This year a serious injury left Julietta (ringed DF9) unable to make the perilous journey from Welney across the north Atlantic to the safety of remote wetlands in Iceland. Her partner Romeo (ringed DJ4) stayed behind to be with her and breed in the UK. 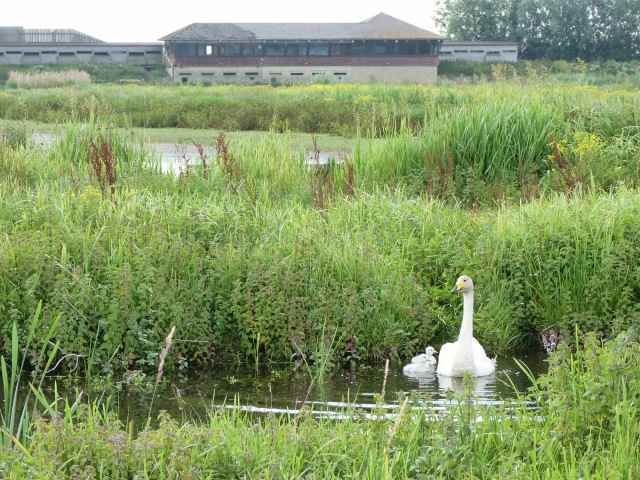 Each year some Whooper Swans like Julietta fail to join the annual migration back to Iceland as a result of injury caused by power-line collisions. But it is almost unheard of that an injury-free swan should stay behind to be with one that cannot migrate. It is very rare for a pair to breed successfully in the UK. This is the first time ever that Whooper Swans have bred at WWT Welney, and the first recorded breeding in Norfolk since 1928.

Wetlands such as WWT Welney on the Ouse Washes are a safe place for swans to roost away from predators. In the last 100 years, the amount of inland wetland alone has halved — because of land reclamation, changes to agriculture, pollution, water diversions and other developments. Such losses are catastrophic for wildlife: scientists blame them for pushing a third of all amphibians, 15% of water birds, over 40% of reptiles, 30% of mammals and 6% of fish species close to extinction.

Leigh Marshall, reserve manager at WWT Welney, said: "Though we love to see this pair throughout the summer, in many ways it is very sad that they've stayed in England while the rest of their population has returned to Iceland to breed. We are really pleased for them that they've been able to hatch a brood, despite the odds being stacked against them with Julietta's injury. It's a remarkable testament to WWT Welney and our visitors that the swans felt that the reserve provided the right conditions to raise a brood. Visitors are coming to see the rare spectacle, but showing the utmost respect."

Leigh Marshall continues: "We reckon Julietta's injury could have been due to a flying collision. Swans are too big to avoid power lines at the last minute. Injuries and sometimes death can occur from these collisions. Luckily for the swans, UK Power Networks and National Grid have worked with WWT to make their cables more obvious to the birds by using reflective tags or large markers. This is done to reduce the frequency of collisions and is something we hope to continue with in the future." 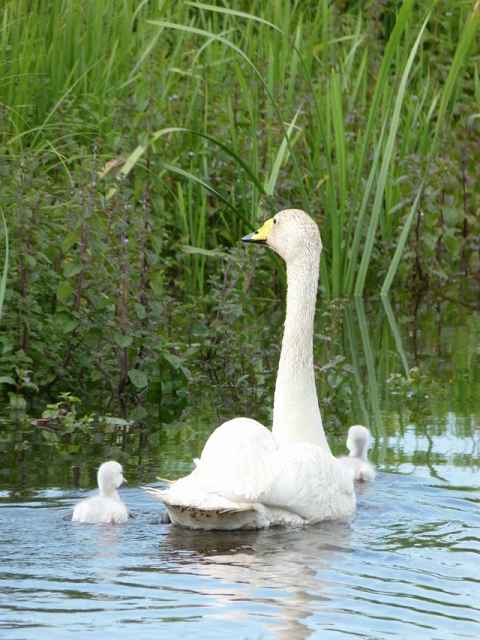 Both Romeo and Julietta were ringed at WWT Welney in November 2007. They have nested on the main lagoon in front of the main observatory and have thrilled visitors by proudly displaying their cygnets. As the cygnets grow, the adult swans will take them around the washes to feed and explore their habitat.

WWT works to protect Whooper Swans and their habitats. WWT Martin Mere, Caerlaverock and Welney Wetland Centres are home to thousands of wintering Whooper Swans each winter. WWT tracked the migration of 50 Whooper Swans to and from Iceland to check that their flights didn't bring them into conflict with proposed offshore wind farms. By monitoring the population, WWT keeps a check on what needs to be done to protect them. X-rays taken of the swans, when staff catch them for ringing, show that around 13% are living with shot embedded in their tissues — a strong indicator of the level of illegal shooting that continues. Lead poisoning from ingesting spent gunshot is also a problem. WWT studies have demonstrated that a high proportion of birds have elevated blood lead levels.